14 Best Things to Do in Yorktown, Virginia 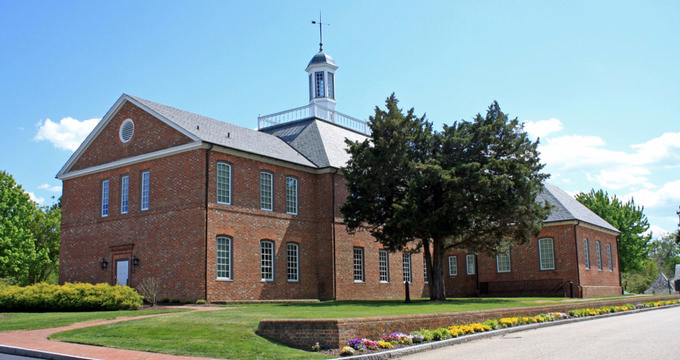 Yorktown, Virginia offers an array of different things to do, from beaches to boutiques to battlefields. Visitors and locals alike can stroll along the waterfront, learn about the area’s history, admire the architecture of the eighteenth century, or grab a meal at one of the historic restaurants. Yorktown is most famous for its historic battles and riverfront charm. History enthusiasts in particular will love the town, as it’s home to the American Revolution Museum and the Colonial National Historic Park, home to multiple historic sites. 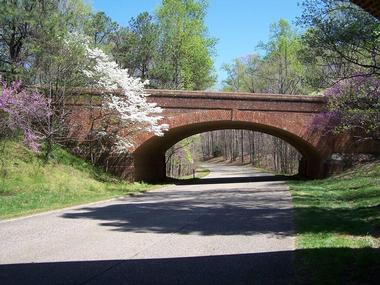 The Colonial Parkway in Yorktown, Virginia is a scenic parkway that stretches for twenty-three miles, linking together the three different points of the state’s Historic Triangle: Yorktown, Williamsburg, and Jamestown. The parkway is a part of the Colonial National Historical Park, managed by the National Park Service. With parts of it constructed from 1930 to 1957, the Colonial Parkway connects the three historic communities by way of a road shielded from any view of the nearby commercial development. The roadway is also toll-free and free of any semi-trucks, with the ends being the York River and James River. 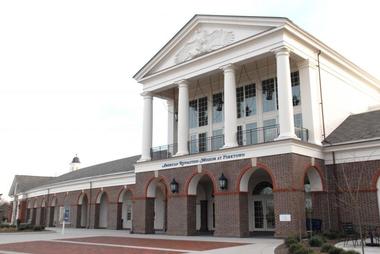 The American Revolution Museum in Yorktown, Virginia replaced the former Yorktown Victory Center, officially opening in 2017. Through outdoor living history exhibits and immersive, comprehensive indoor exhibits, the Yorktown museum provides a national perspective that conveys a sense of the epic scale and transformational nature of the American Revolution, as well as the complexity and richness of the Revolutionary heritage of the United States. The permanent exhibit galleries contain dioramas, immersive environments, period artifacts, and films, such as the museum’s “The Siege of Yorktown” experiential theater presentation. The Revolution-era farm and Continental Army encampment provide living history experiences. 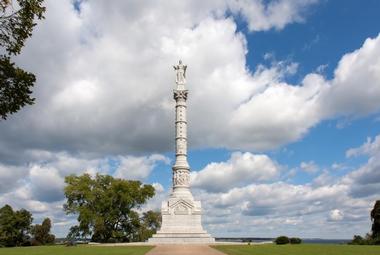 , OH -- You are reading "14 Best Things to Do in Yorktown, Virginia" Back to Top 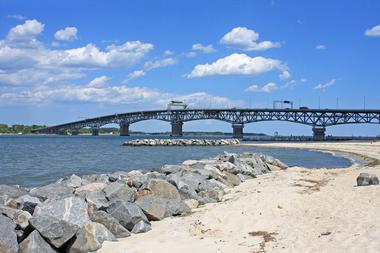 The Yorktown Beach is situated within historic Yorktown and offers a public, two-acre beachfront catering to family-friendly fun. It is also one of the Hampton Roads’ only beach that features a Mobi Chair and Mobi-Mat for wheelchair accessibility. The year-round Yorktown Beach is ideal for fishing, swimming, boating, and sunbathing. The grassy picnic area and ADA-accessible fishing pier are available to beach guests as well. Free parking can be found in several lots around town, along with the complimentary Trolley. Bikes, paddleboards, and kayaks can be rented at the beach to further explore the Yorktown area. 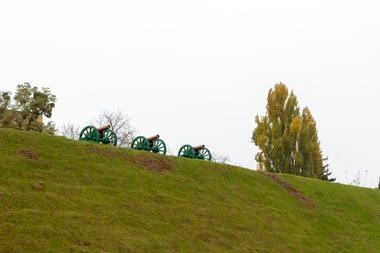 
The Colonial National Historical Park can be found within Virginia’s Hampton Road region in Yorktown. The historic park is managed by the National Park Service, protecting and interpreting several historical sites related to the Virginia Colony, and more broadly, the history of America. These sites range from the first landing site of settlers from England who go on to settle Jamestown to the Yorktown battlefields, the site of the final battles of the American Revolution. In all, the Colonial National Historic Park is made up of the Colonial Parkway, the Yorktown Battlefields the Cape Henry Memorial, the Green Spring Plantation, and Jamestown.

-- You are reading "What to Do in Yorktown, Virginia this Weekend" Back to Top 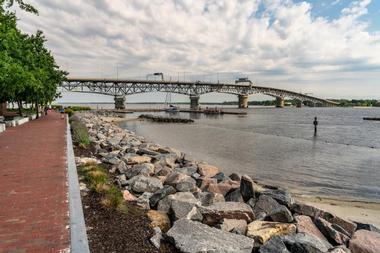 
Yorktown’s Riverwalk Landing is nestled along the banks of the York River and is one of the best kept secrets of the state of Virginia. While the town is mostly known for its historical significance, there is also plenty of locally-owned specialty shops and delicious food to be found as well, particularly along Riverwalk Landing. Unique eateries serve a variety of fare, ranging from gourmet burgers and artisan pizzas to fresh seafood and sushi, while specialty shops provide one-of-a-kind gifts, such as home decor, local art, and jewelry. Numerous different free community events are hosted here year-round as well. 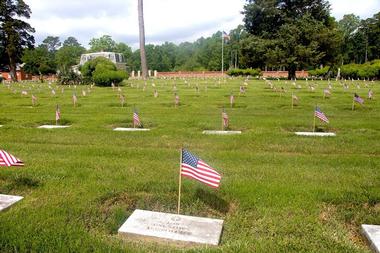 The Yorktown National Cemetery serves as a final resting place for over two thousand soldiers of the Civil War, many of which lost their lives during the Peninsula Campaign of 1862. Yorktown is best known as the site of the Revolutionary War’s last major battle, it’s strategic position on the Virginia Peninsula made the town crucial to military strategy as well throughout the Civil War for both the Confederacy and the Union. Spanning across 2.7 acres, the Yorktown National Cemetery is one of the National Park Service’s fourteen national cemeteries and is located within the Colonial National Historical Park. 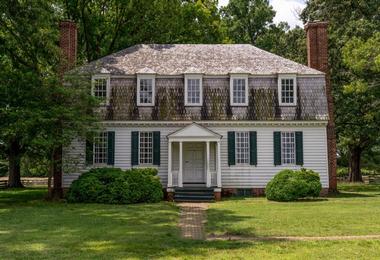 The Moore House is the site where the terms for surrender were negotiated from the British army on October 17th of 1781. After close-range bombardment by American and French artillery that lasted eight days, General Cornwallis of the British army requested a ceasefire to negotiate his surrender. The negotiations were held the following day at the residence of Augustine Moore. Two representatives were sent to the home and an agreement was settled on late that night. The house today has been altered and renovated, but is open to the public between the months of April and October. 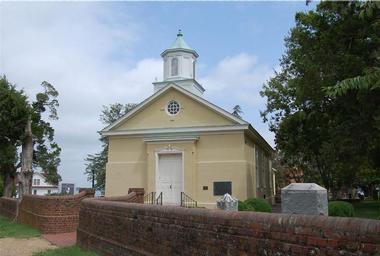 The Grace Episcopal Church Yorktown features a history that is intertwined not only with the local community of Yorktown, Virginia, but more broadly with the United States’ history as well, dating back to the country’s pre-Revolutionary days. Located at Main Street and Route 1003, the historic Grace Church and cemetery, which is also called the York-Hampton Parish Church, was constructed back in the year 1697 and updated later to feature a Greek Revival architectural style. The Grace Episcopal Church Yorktown, which as attended by several Founding Fathers, was added in 1970 to the National Register of Historic Places.

, Michigan beaches -- "Best Things to Do in Yorktown, Virginia for Locals & Tourists - Restaurants, Hotels" Back to Top 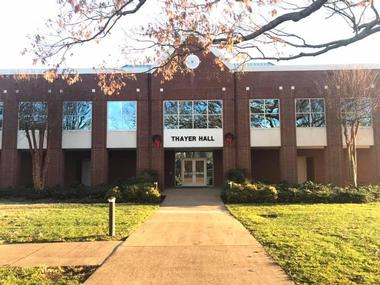 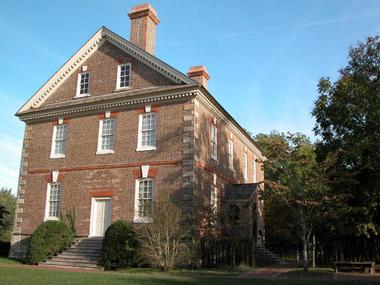 The Nelson House in Yorktown was the residence of the town’s most famous son, as well as as one of the men who signed the Declaration of Independence, Thomas Nelson, Jr. The devotion Nelson showed during the American Revolution towards the patriot cause contributed greatly to country’s creation. Not only is the Nelson House historically significant for the man who called it home, but the house is also one of Virginia’s finest examples of the early Georgian architecture style. Tours of the first floor of the early eighteenth-century Nelson House are available as staff permits. 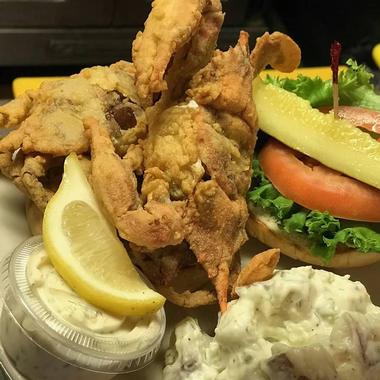 The Yorktown Pub serves a wide variety of pub-style fare, as well as other dishes featuring fresh seafood, along the town’s historic Yorktown Bench. Guests can enjoy scenic views of the York River and the country’s most historic beach during their meal or having a refreshingly cold drink. A large portion of the menu at the Yorktown Pub is locally caught fresh seafood, such as back-fin crab and jumbo lump crab from the Chesapeake Bay and oysters and clams from the Ware, James, York, SEvern, and Rappahannock Rivers, along with the Lynnhaven Bay. Note that the pub does not do reservations. 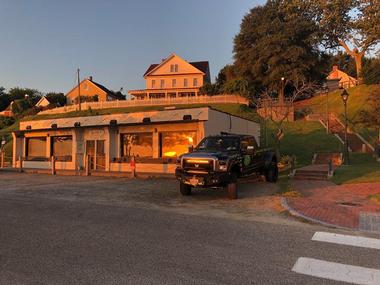 Larry’s Alehouse and Deli is the first brewery to open in the historic town of Yorktown, Virginia, offering Larry’s Hard Lemonade and some amazing views of the nearby York River. The alehouse features its two fruit-infused signature craft beers, as well as a rotating selection of other microbrews from local breweries on tap. One of the most popular drinks created by Larry’s Lemonade during the summer is The Original Larry’s Hard Lemonade Slushie. Situated acrros from Yorktown’s beach, Larry’s Alehouse and Deli also offers a pub style menu, including an assortment of pizzas, hot dogs, burgers, and sandwiches. 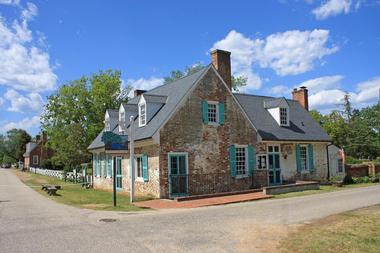 Mobjack Bay Coffee Roasters specializes in roasting high quality coffee from all over the world, providing well-balanced, flavorful, and smooth coffees with unique roasting profiles that are made particularly for those “who drink coffee to love it.” Jo and Celeste Gucanac opened the coffee business in 2007 and pride themselves on the exception quality of the coffees they produce, made from coffee beans from small plantations that possess specific certifications.

14 Best Things to Do in Yorktown, Virginia

You are reading "14 Best Things to Do in Yorktown, Virginia " Back to Top

25 Best Things to Do in Lake Placid, NY

25 Fun Things to Do in Erie, Pennsylvania