13 Best Things to Do in Paphos, Cyprus 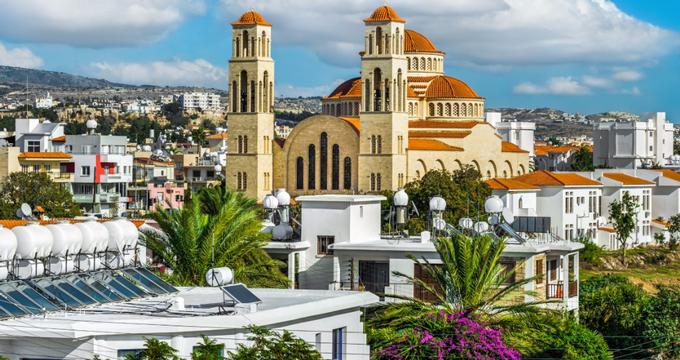 Paphos is the capital city of the province with the same name, which is situated on the western side of Cyprus. The old town of Paphos is now called Kouklia and is in an area thought to be the birthplace of Aphrodite, about 16 km from the new town. The new town's fortunes have waxed and waned along with those of Cyprus. Since the 1974 war, much of the investment in Cyprus has been made in this area. There are four resorts in the area and a new fishing harbor has been built. The area inland is ideal for growing grapes and the ancient art of making wine has been revived. CDC information for travelers. Hours/availability may have changed. 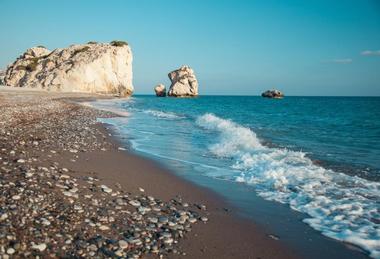 Just offshore, between Paphos and Limassol, there is a sea stack that is believed to be the birthplace of Aphrodite, the Greek goddess of love and beauty. The waves crash at the base of the rock to form a pillar of foam out of which she is said to have emerged. The site attracts a large number of visitors because of its status in mythology. There is a local legend that states that anyone that swims around the rock will be beautiful throughout eternity. The sea is rough and climbing on the rock is prohibited but there are sheltered beaches and a restaurant nearby. 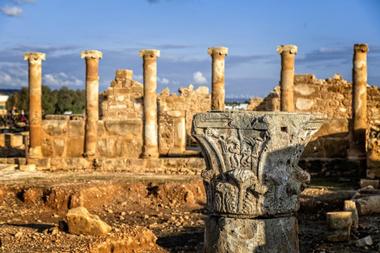 This park was declared a UNESCO World Heritage Site in 1980. The site is still being excavated but so far ruins from the 4th century BC onward have been uncovered, including remains of important cities from Greek and Roman times. The main attraction is the mosaic floors of the four elaborate houses of Dionysus, Theseus, Orpheus and Aion. There are also the remains of a basilica, amphitheatre, and the Tomb of the Kings necropolis. It is a large, uneven site so good walking shoes are necessary. There is little shade and it is usually hot. Water is for sale on site.

3.Tomb of the Kings 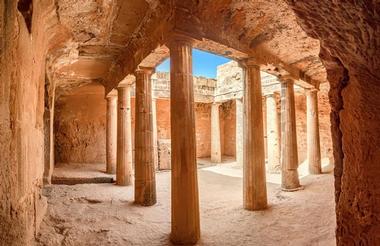 The necropolis in the Archaeological Park was first used during the Hellenic period of the 3rd century BC. It was in continuous use until the 4th century AD. There is evidence of Greeks, Romans and early Christian burials. The title, 'Tomb of Kings' is inaccurate as it was not used for royalty but for civic leaders and other celebrities and their families. During medieval times the area was altered by squatters and in the 19th century, it was looted. Throughout the 20th century, excavations have been undertaken by Cyprus Museum, Paphos Museum and the national Department of Antiquities.

You are reading "13 Best Things to Do in Paphos, Cyprus" Back to Top 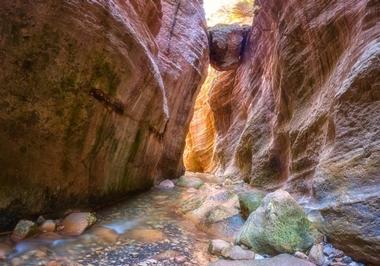 One of the island's natural wonders is to be found on the Akamas Peninsula, 6 km west of Paphos. Limestone has been carved by running water for thousands of years to create 30m high walls of rock strata. It is hot in summer with little shade and in summer, the stream can become a torrent. It is a difficult hike over areas of rocky and slippery terrain but the scenery is worth the effort. Along the way, hikers will notice juniper, pine, oak and wild fig trees. There are also several endangered plant species. Foxes, hares, raptors, fruit bats, butterflies and reptiles inhabit the gorge. 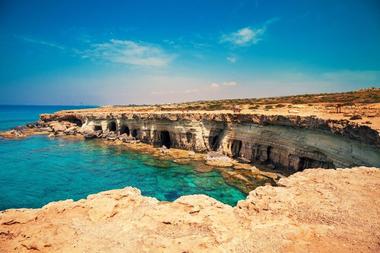 
Situated on the northern coast of the Akamas peninsula, Blue Lagoon Beach is one of Cyprus' most isolated beaches. It is sheltered and the crystal clear water is warmer than in other locations. The shadows of boats and swimmers can clearly be seen on the white sand, meters below. There are reefs and rocky outcrops close to shore which make diving and snorkeling interesting. Access is by boat or four wheel drive only. There are regular organized excursions to the area and Jeeps, buggies and quad bikes can be hired. The coastal road is hazardous but there is an alternative inland route to the beach. 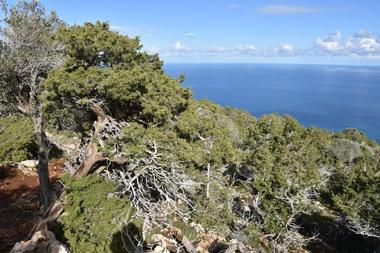 
This small town, formerly known as Marion, has had mixed fortunes. It has been ruled by Egyptians, Persians, Arabs, Greeks and the British. It was likely colonized during neolithic times but came to prominence when copper was found nearby in the 3rd century BC. It was destroyed by Ptolemy and rebuilt, only to suffer extensive damage after the Muslim conquests. It was formally founded during the British colonial era and today, it is a thriving tourism destination, with a Blue Flag beach and the Golden Award for being among the Top 20 most sophisticated tourism destinations in Europe.

You are reading "13 Best Things to Do in Paphos, Cyprus" Back to Top 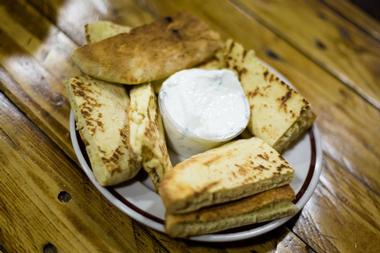 Serious foodies have put together a program of events for the tourists' taste buds. There are city and rural tours, morning, evening and full day tours. These could be food walks or wine tasting, cooking classes or culinary workshops. They operate throughout the island and have a program of weekly tours, from Monday to Saturday. Tourists can taste authentic snacks, traditional dishes and award-winning wines, in the cities or the backstreets of Cypriot villages. In Cyprus, there is a cornucopia of food festivals, each assigned its own week. Tours can be customized for small or large groups. 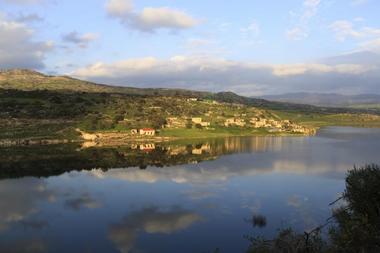 Cyprus has had a long history of conquest, conflict and division, the latest being the Greek / Turkish divide. The Evretou village was a casualty of the 1974 Turkish invasion and subsequent ethnic split in the landscape. Before 1974, people were forcibly removed into villages along ethnic lines. This village was occupied by Turks but after the conflict the dividing line had shifted further north and the residents had to flee. There are ruins of houses, farms, a mosque and the town hall. The surrounding area has subsequently been flooded by the damming of the river. Access is difficult, especially when the dam is full. 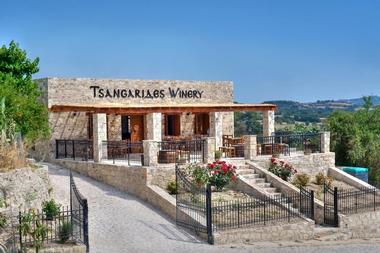 The Tsangarides brothers are the fifth generation to be working their wine farm. The wine industry is on the rise again and they aim to be on the leading edge of its development. The farm is situated in Lemona village at the southern end of the Troodos mountains. In 2005, they built a winery where they produce organic red, white and rosé, estate-grown wines. There are three vineyards, totaling 100000 square meters of vines, all carefully positioned for maximum drainage. Supporters of the winery can adopt a vine which entitles them to one bottle of wine and to pick grapes off that vine. 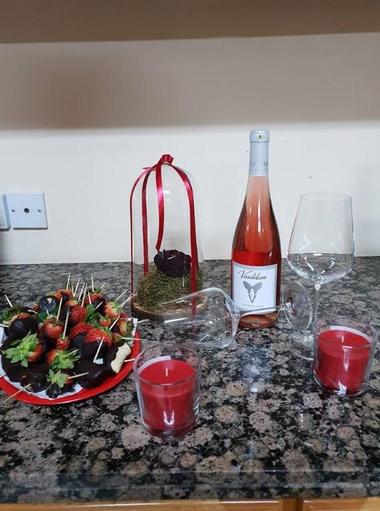 This winery was established in 1993 by three brothers. It is one of the first wineries in Cyprus. It is situated at 650m above sea level with spectacular views of the vineyards, the valley and the sea. Planting, pruning and harvesting are done by hand, using traditional tools and methods. The wine maturation process requires total silence and darkness in a humidity and temperature controlled environment. Visitors are invited on tours and for tasting. There is an exhibition on the premises that tells the story of the enterprise through artwork, photographs and audiovisual presentation. 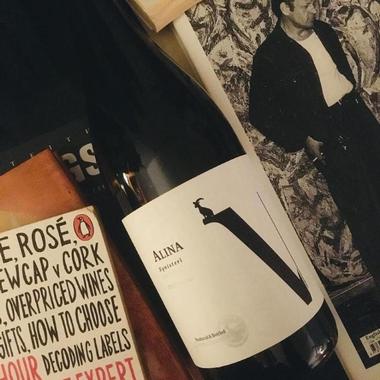 Andreas Kyriakides gained his experience in the wine industry by working in the Department of Viticulture. He and his brother and cousin started the first private regional winery in the Vouni Panayia area. 25 ha of vineyards have been planted at 1000 m above sea level. The moderating effect of the Mediterranean Sea and the Troodos mountains create the ideal climate for the growth of the indigenous grape varieties. This area is one of the few in Europe that do not need to grow grapes on root stock. The winery produces seven wines and a range of products made from grape juice. The restaurant serves traditional, seasonal cuisine. 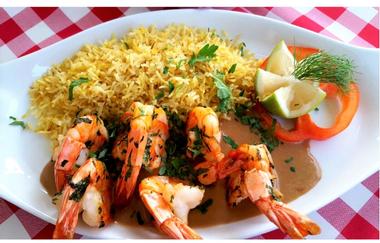 Sienna Restaurant is found on the coastal road, north of Paphos, halfway to Coral Bay. Traditional and international cuisine can be enjoyed inside or al fresco, overlooking the Mediterranean, while keeping an eye on the children in the playground. Master Chef Peter was trained at Harrods in London and believes in using only the finest, freshest ingredients. The restaurant has an established kitchen garden where over 70 vegetables and herbs are grown. There are lunch and dinner menus. Light meals, desserts and cream teas are served at any time. The venue is ideal for private functions, from a dinner for two to a full family reunion. 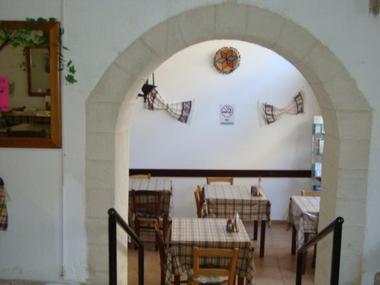 This family-owned traditional taverna has been under the same management since 1986, cooking with the same family recipes. It is situated in a renovated house, in a side street. Outdoor seating is in the street. They serve meze dishes. A choice of five small portions of the twelve on selection or one large portion make up a main course. There is no menu as the traditional dishes are conjured up from whatever meat, vegetable and herbs are fresh and in season. The restaurant is open for lunch six days a week but for dinner only on Tuesday and Friday evenings.

13 Best Things to Do in Paphos, Cyprus

You are reading "13 Best Things to Do in Paphos, Cyprus " Back to Top

25 Best Things to Do in Estonia

25 Best Things to Do in Latvia

25 Best Things to Do in the United Kingdom

25 Best Things to Do in England