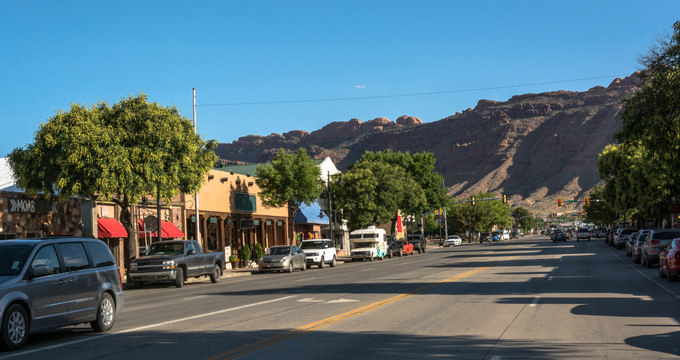 Located in Grand County in the eastern part of the state of Utah, Moab is a highly popular tourist town that attracts big numbers of visitors for nature and recreational purposes. The Colorado River flows alongside the city, with the Utah-Colorado border not too far away and various national parks in the surrounding area. Moab is the county seat of Grand County and covers an area of 4.1 square miles. The city is located in the Mountain Time Zone and has a population of approximately 5,200 people. CDC information for travelers. Hours/availability may have changed. 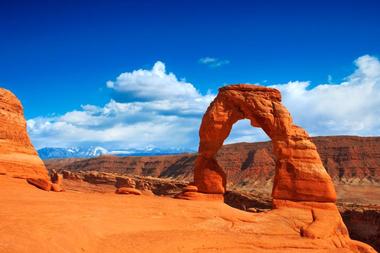 The origin of the city's name is subject to debate, with some believing it was inspired by a Native American word, while others claim it's a Biblical reference. In either case, the area was settled by Mormons in the early 19th century as a trading fort at the Colorado River crossing. It was called Elk Mountain Mission at the time, but attacks from Native Americans resulted in the area being abandoned. Years later, in 1878, the city of Moab was founded on the same spot and became a strong trading location until more Colorado River crossings and railroads were established.

Moab was a simple farming town to begin with, but the economy expanded over the years to include mining, helping to boost the population and lead to the construction of new buildings and schools. As the years went by, more people began to learn of Moab's existence as the area was used for Hollywood movie shoots and became a popular tourist spot due to its proximity to various natural sites that are perfect for mountain biking, hiking, rafting, climbing, and more.

Elevation is an important geographical statistic that tells us how high or low an area is in relation to sea level. It can be used when talking about towns, cities, mountains, and more, and the elevation of a location has a direct effect on its climate, with higher elevations resulting in lower temperatures in general. The elevation of Moab is 4,026 feet (1,227 m), which is much higher than the national average of 2,500 feet (760 m). Many towns and cities around the United States were founded in coastal regions and have quite low elevations of under 500 feet (152 m). Moab’s high elevation is due to its inland location and the fact that Utah is one of the highest states in the nation.

You are reading "Moab, Utah Elevation" Back to Top

3.Climate and Things to Do in Moab, Utah (Moab, Utah Elevation) 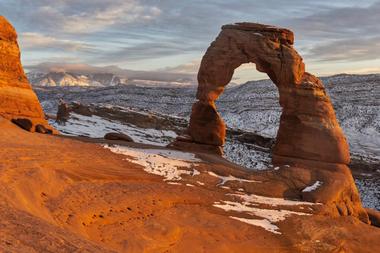 The city of Moab has an arid climate with hot summers, cold winters, and dry conditions almost all year long. Less than an inch of rain is expected on average per month in Moab, but some snow can fall from December through to February each year. The coldest month of the year is January, which has average lows of 20°F (-7°C), while the warmest month is July, with average highs of 99°F (37°C). Temperatures can drop quite strongly in Moab after sunset, with nights being a lot colder than days in general.

The key attraction in Moab is its appeal to outdoor enthusiasts. It's a highly popular spot for mountain biking, hiking, camping, and more, with the highly popular Slickrock mountain bike trail just outside the city and both the Arches and Canyonlands national parks right nearby as well. The annual Moab Jeep Safari event is another highlight of the city, with kayaking and climbing also popular in and around Moab.

You are reading "Moab, Utah Elevation" Back to Top

Horseback riding is the best way to observe the landscape of the Moab desert of Utah and Moab Horses at Hauer Ranch offers trail riding and lodging. Visitors can explore famous movie sets, the Colorado river, open range of the desert and personalized, guided trail tours.

John Hauer owns and operates Hauer Ranch along the Colorado River in Moab, Utah, as well as another ranch in South Dakota. . John has authored college text books and published several articles in the Mule niche. The Moab Horses at Hauer Ranch Location used to include Quarter Horses, Appaloosas, Morgan’s, and Peruvian Pasos, but the ranch recently was converted to a mule only operation, although there are currently still some horses in use. Presently at Hauer Ranch there are 30 Horses and Mules residing. The family owned business raise their own mules which can also be purchased through the ranch.

Guest Corrals and boarding are available on occasion. The corrals for guests that wish to bring their own equine to Hauer ranch are set apart from the ranch stables and trail riding facilities and special requirements must be adhered to for cleanup and trailers. There are special contracts that must be signed for guest corrals and boarding.

The Hauer Ranch has had several classic cowboy Westerns filmed on location in the desert and around the ranch, and film crews shot scenes at the ranch in 2013 for a movie as well. The Sandstone formations, open range, cliffs, and the flowing river, not to mention that the ranch itself has been designed to look like the Old West Boardwalk, makes it the perfect location for a country western shootout.

Hauer Ranch offers several packages for horseback or mule trail rides. All rides takes place in the Moab Desert Professor Valley on Highway 128 following the Colorado River. Guides will point out locations of movie sets and talk about the folklore of the area during each tour. Each participant will also be fitted with a helmet, saddle and saddle bags and be given a brief orientation on how to ride and safety. A waiver will have to signed.

Children can ride as long as they are over 5 years old and can sit in the saddle by themselves. People are not allowed to sit two people together in a saddle. Guests must also be less than 250 pounds and this rule is enforced to protect the health of the animals. Most days groups have 8 or fewer people, however, groups of up to 18 can be accommodated up to 1 time.

Standard ½ Day Ride is a trail ride for at least two hours. This is the most popular ride and includes one scenic loop around the Professor Valley.

Full Day Ride-Offered in the Spring and Fall when the temperatures are not too hot. This full day ride starts in the morning and departs from the stables taking one full loop around the Professor Valley and the returning to the stables. This first loop takes approximately 2 hours. Participants then break for lunch and spend time enjoying the stables before departing for a different 2 hour loop in the afternoon. Full day rides can be open to the public or booked as private tours. Lunches are not provided.

La Sal Mountains Ride to Miner’s Basin-Only offered from June 15 to October 15, this full day trip meets at Hauer ranch in the morning and then be transported to the La Sal Mountains where you will be riding a horse or mule through pioneer mining history and alpine climes.

There are two different places you can stay while visiting Hauer Ranch.

Hauer Rock House is a trilevel home with 3 bathrooms that sleeps 5. The Perch is located adjacent to the house and can sleep an additional 4 more people on 2 queen size beds. The Perch has no amenities other than heating and air-conditioning. The Rock House includes full kitchen with all accessories such as pots and pans, utensils and towels. A barbeque grill is also included. There is a two-night minimum when renting this property. Although there is no smoking, the Rock House is pet friendly.

Hauer Guest House Has views of the Fisher Towers and is a very remote setting perfect for 1-2 people. There is easy access to the Colorado River for boating or fishing as well as the many mountain biking and ATV trails nearby. The Guest House has a maximum occupancy of 3 and includes 1 queen bed and 1 twin bed. The minimum rental is 2 nights. There is no kitchen but there is a mini fridge, coffee pot and microwave. Although the Guest House is smoke free, it is pet friendly.

Back to: Best Things to Do in Moab, UT

You are reading "Moab, Utah Elevation " Back to Top

23 Best Things to Do in Park City, Utah