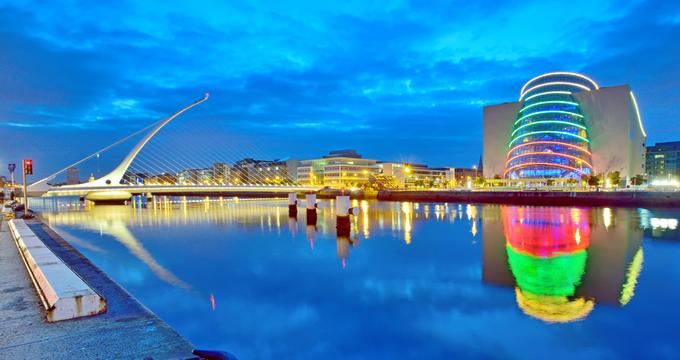 Dublin is at its warmest in the summertime. This is the time when there are many festivals, many crowds because of school breaks, and hotels raise their room rates as do airlines. Winter is cold but you’ll find the best hotel deals if you don’t mind the cold weather. Spring and fall are the best times to visit Dublin - the weather in the city is cool and comfortable but not cold. There are far fewer people so you don’t need to stand in lines like you might have to do in the summer. Room rates are lower than in the summer and airfares can be less expensive.

In February, the high and low temperatures remain the same, tying this month with January as one of the coldest months of the year.

Dublin Weather in March: The average high temperature for March increases a handful to 50°F (10°C). Low temperature averages also get a small bump up to 39°F (4°C). Unless you’re a fan of very cold swims, avoid trips to the beach this month as the sea temperatures average at 50°F (8°C).

In April, the average high temperature and average low temperature both increase slightly to 52°F (11°C) and 41°F (5°C) respectively.

May receives 6 hours of sunshine a day, the most daily sunshine in Dublin for the whole year. The sunnier days are matched by warmer temperatures. The high temperature is 59°F (15°C) while the low temperature is 45°F (7°C).

Dublin Weather in June: It’s a cool summer in Dublin as June rolls around with an average high temperature of 63°F (17°C). Low temperatures are 50°F (10°C).

July is the warmest month of the year in Dublin as well as the driest. The precipitation average barely exceeds 50mm. Meanwhile, the average high temperature and average low temperatures measure in at 66°F (19°C) and 54°F (12°C) respectively.

In August, the high and low temperatures hold steady at 66°F (19°C) and 54°F (12°C). August is also the wettest month of the year with precipitation averaging 80mm. Meanwhile, this month is the best time to hit the beach with sea temperatures at 59°F (15°C).

November sees a healthy amount of rain with a precipitation rate of 60mm. The average high temperature and average low temperatures range between 50°F (10°C) and 41°F (5°C).

If you’re in Dublin to enjoy the best of the festivals, it’s best to plan your visit within the summer months of June through August. Festivals fill the streets of the city and the locals come alive in jovial merrymaking. Budget travelers searching for the best deals in Dublin should come during the winter season and bring their heaviest coats with them. Prices for hotels are at the lowest in January, so those who really want to save as much as possible should visit then. For the best temperatures, crowds and prices, come in March or November.

2.Getting to Dublin, Ireland

There are several ways to get to Dublin. One of the busiest airports in Europe, the Dublin International Airport is served by Aer Lingus, Ireland’s national airline, as well as numerous international airlines many with direct flights to Dublin. There are hundreds of flights in and out of the airport every day. It is conveniently located about seven miles north of the center of the city. Another way to get to Dublin is by ferry. Dublin Port is about two miles from the center of the city. Irish Ferries provides several fast ferry options from Holyhead, Wales, in the United Kingdom. Carrying up to 2,000 passengers, Irish Ferries Ulysses is the largest car ferry in the world.

3.Getting From the Dublin Airport 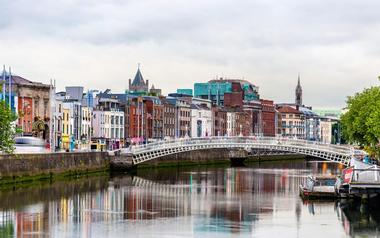 The Dublin International Airport is located close to the city, and there are many choices for getting from the airport into Dublin. There are numerous local and international car rental agencies that operate desks at the airport. AirCoach is a shuttle bus service from the airport to the city. It operates 24 hours a day and runs every 15 minutes. Fares are very reasonable and it is a fast way to get into the city. Airlink is a part of Dublin’s bus system: this is less expensive than AirCoach and it stops at Busaras, Dublin’s central bus station. There are other Dublin buses that run between the airport and the city: these take about 30 minutes.

4.Getting Around Dublin by bus, dart, tram, luas

Dublin offers several forms of public transportation that help visitors to get around the city to see its many sights. The Dublin Bus company runs a variety of buses including minibuses known as “imps,” single-decker buses, and double-decker buses. Buses operate about every 30 minutes and the bus stops look like giant green or blue lollipops. Dublin Area Rapid Transit (DART) trains run above ground and connect central Dublin with suburbs and seaside areas. Luas is the light rail tram system that has two lines: the Red Line and the Green Line. Luas gets you around the city and also out into the suburbs.

5.Getting Around Dublin by bus, dart, tram, luas


Dublin has a great public transportation system, but because many of the best attractions are close to each other, visiting Dublin on foot is one of the best ways to see the city. It is a compact city and if you get tired of walking you can hop on a bus. Taxis are usually found in front of major hotels and transportation stations. Driving a car in Dublin can be challenging: don’t drive in bus lanes and be careful where you park because fines are exorbitant. Riding a bike to visit Dublin is a great idea: Dublin ranks in the top ten list of the world’s bicycle-friendly cities. Motorbikes are also a popular way to get around.


Dublin has a variety of restaurants and other eateries that serve both traditional Irish fare as well as international cuisine. Not many visitors are aware of this, but eating in Dublin can be as expensive as eating in New York or London. However, don’t despair: you can find affordable places to eat in Dublin. You can take a break from restaurants to make dining a little less expensive. Dublin has numerous cafes and tearooms: here you will find affordable soup, sandwiches, and hot dishes. A pub is also a good choice: here you can find inexpensive lunches, but not dinners because pubs generally stop serving food in the mid-afternoon.

Dublin offers a wide range of shopping venues and there are many items made in Ireland that visitors look for. The main shopping area in Dublin is on Grafton Street south of the River Liffey. Dublin’s most upscale department store called Brown Thomas is located on Grafton Street along with Weirs, a well-known jeweler. But there are many streets that radiate out from this main shopping street: these side streets should be explored because they are known for their shops selling books, clothing, gifts, handicrafts, and jewelry. In addition to Brown Thomas, other departments stores include Arnotts, and Clerys. Dublin also has its fair share of malls and shopping centers. 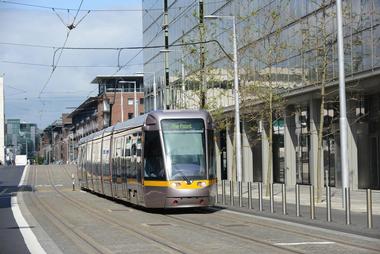 The River Liffey dissects Dublin into two parts: South of the Liffey and North of the Liffey. There are many bridges that cross the Liffey, so it is easy to visit both parts. South Liffey is home to the city’s main transportation hub which is called Heuston Station. Here you’ll find the Guinness Storehouse: formerly called the St. James Gate Brewery, it is the centuries old home of the national beverage. The Houses of Parliament and Trinity College are located in this district. North of the Liffey is O’Connell Street, Dublin’s main thoroughfare. The Dublin General Post Office is located in this area as well as the Spire of Dublin and the Old Jameson Distillery.

9.Getting Married in Dublin, Ireland

Dublin is full of history and wonderful places that make great wedding venues. There are many hotels that cater to weddings. Some of these include the Portmarnock Hotel and Gold Links, the Gibson Hotel, the Shelbourne Hotel, the Springfield Hotel, and many more. When you think of Ireland, you might think of castles. Clontarf Castle Hotel is a 12th century castle surrounded by private grounds located just two miles from Dublin. For a seafront venue, The Waterside House Hotel has a terrace overlooking the sea and it can accommodate up to 220 guests. The Cliff at Lyons is a restored mill with a waterfall and a courtyard.

10.Where to Stay in Dublin, Ireland

Dublin has a wide range of accommodations from five star luxury hotels to old guesthouses, bed and breakfasts, and budget hotels. Room rates do not change much during the year. Luxury hotel properties include the Merrion, the Conrad Dublin, the Dylan Hotel Dublin, the Four Seasons Dublin, and many more. Most of the luxury hotels are in the Temple Bar area and around Trinity College. Midrange hotels can be found in the St. Stephen’s Green area: Number 31 is an example of an affordable hotel in this area. Most budget hotels are north of the River Liffey. Affordable guesthouses such as the Roxford Lodge are located around Lower Gardiner Street.