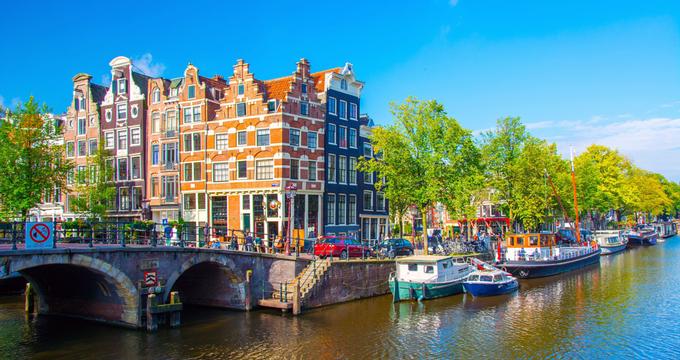 The best time to visit Amsterdam is between April and October. Summer time is a peak season, especially during July and August when schools are on break. The weather is warm and cycling is a fun way to get around, however, room rates are high and the city can be crowded. Another peak season is from early April to mid-May: this is the time when Holland’s famous tulips are in bloom. Winter is cold with wind, rain, and occasional snow: however, if you don’t mind the cold, there are great deals on accommodations and there are no crowds and no lines. CDC information for travelers. Hours/availability may have changed.

In January, the coldest month of the year in Amsterdam, the winter season is in full swing. The average low temperature is a frigid 34°F (1°C) while the average high temperature barely hits 41°F (5°C).

February sees a dip in the average low temperature which sinks to 32°F (0°C). The average high temperature, on the other hand, increases by 5 degrees to 46°F (8°C). Precipitation levels are generally low at 39 mm.

May sees increased temperature averages with 63°F (17°C) for the average high temperature. The average low temperature is 46°F (8°C). This is the best month of the year to enjoy Amsterdam’s beautiful tulips.

Amsterdam Weather in August: The hottest month of the year in Amsterdam is August with the high temperatures averaging at 70°F (21°C). Days remain very sunny for the summer season with an 8-hour daily average of sunshine. Low temperature averages hover at 55°F (13°C).

In September, the expected rainfall in Amsterdam is 75 mm. The average high temperatures decrease a handful to 64°F (18°C). Meanwhile, the average low temperature drops a few degrees to 52°F (11°C).

October receives even cooler temperatures with the average high temperature going down to 59°F (15°C). The low temperature is 46°F (8°C).

In November, Amsterdam receives the most rain in the year with an average of 90 mm. The average high and average low temperatures range between 48°F (9°C) and 39°F (4°C).

December marks the arrival of winter in Amsterdam with a low temperature average of 37°F (3°C). The high temperature barely hits 43°F (6°C). This coincides with the daily sunshine average of 3 hours.

There’s no denying that Amsterdam enjoys a huge draw of tourists yearly. Travelers who want to avoid droves of tourists should plan their visit between April and May or September and November – before or after the peak season in the summer. If you’re after the best possible deals and prices in Amsterdam, the best time to travel is between December and March. To enjoy the best of Amsterdam’s tulips, visit the city in April or May. April is also the host month for the Tulip Festival, which celebrates the iconic

2.Getting to Amsterdam, Netherlands

There are several ways to get to Amsterdam. The Amsterdam Airport Schiphol is a major European airport and many international airlines fly into this airport. It is located southwest of the city center. Europe is famous for its excellent train system: trains arrive at Amsterdam’s Centraal Station from major cities all over Europe. There are high speed trains such as the Thalys high speed train and the Eurostar high speed train. Arriving by car is made easy by the numerous major international highways that run through the Netherlands towards Amsterdam. There are many international buses that arrive at Amsterdam’s bus terminal across from the Amstel rail station: this is an inexpensive way to get to Amsterdam.

3.Getting From the Amsterdam Airport 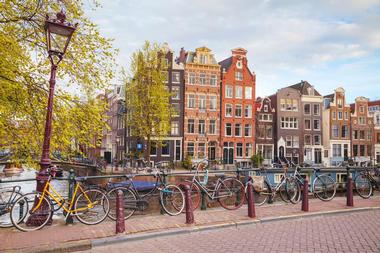 Amsterdam Airport Schiphol is the main airport of the Netherlands: 90 airlines fly in and out of this busy airport. There are several ways to get into Amsterdam from this airport. The Amsterdam Airport Express leaves frequently from the airport and arrives in the center of the city within about 30 minutes. There are one way tickets as well as round trip tickets. The Connexxion Schiphol Hotel Shuttle is a convenient way to get from the airport to more than 170 hotels in the city. The Schiphol train station is located underneath the airport: trains leave from here and run to Amsterdam’s Centraal Station. There are also taxis at the airport.

You are reading "Best Time to Visit Amsterdam, Netherlands, Weather & Other Travel Tips" Back to Top 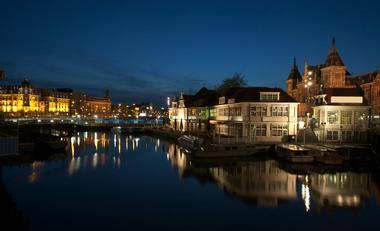 5.Getting Around Amsterdam by Metro, Tram and Bus 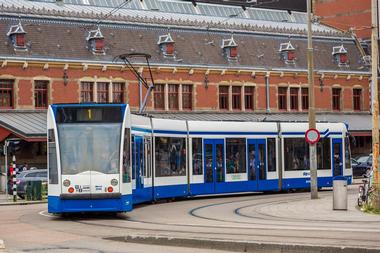 
Getting around Amsterdam on public transport is a breeze. It is convenient and inexpensive. The Gemeentelijk Vervoerbedrijf or GVB is Amsterdam’s public transportation system that connects neighborhoods by metro, tram, and bus. Consider buying and OV-chipkaart: this is a public transport chip card that can be used on the buses, trams, and on the metro. There are a variety of tickets and passes like the GVB day pass. The metro system has four routes and radiates out from Amsterdam’s Centraal Station. The trams are fun to use: they are blue and white and are known for their bells that the conductor rings to alert pedestrians. The bus network is extensive and takes visitors all around the greater Amsterdam area.

You are reading "Best Time to Visit Amsterdam, Netherlands, Weather & Other Travel Tips" Back to Top

6.Getting Around Amsterdam by Train, Ferry & Bike 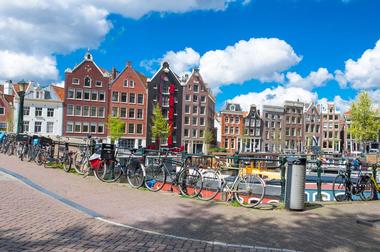 
In addition to the metro, trams, and buses, there are even more ways to get around Amsterdam. Trains leave from Amsterdam’s Centraal Station: many of these trains are bound for other cities in Europe, but there are nearly ten trains lines that run through Amsterdam. The Gemeentelijk Vervoerbedrijf or GVB is Amsterdam’s public transportation system and includes ferries: many of these blue and white ferries are found behind Amsterdam’s Centraal Station and provide free transportation for pedestrians, cyclists, and people with mopeds. This ferry system connects the central area of the city with Amsterdam Noord. Cycling is fun and is an easy way to get around Amsterdam. It’s easy to join the locals: there are many bike rental shops. 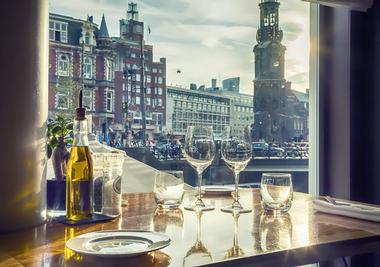 Amsterdam has been a world famous port city and trading city for hundreds of years, so it should come as no surprise that it is full of ethnic restaurants from around the globe. There are more than 50 ethnic cuisines found in Amsterdam. There are fine dining restaurants in 17th century buildings, noisy taverns, bistros along the canals, and exotic Indonesian restaurants. Some meals can be expensive, but it is easy to find budget dining in Amsterdam: many eateries offer a plate of the day, an affordable way to eat in this city. A fun dining option is to take a dinner cruise: these last about two hours and travel through the canals. 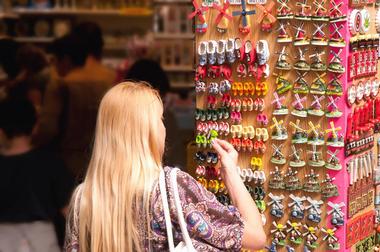 Shopping in Amsterdam can be a great experience because of all of the choices that the city offers. In Amsterdam you’ll find trendy boutiques, departments stores, and malls. Many of the attractions in the center of the city area are often located right next to shops. Some people choose to combine sightseeing and shopping because they can pop into a nearby shop after seeing an attraction. As a port and trading city, Amsterdam offers items from all over the world, but prices can be high. One of the things that visitors often look for is Dutch porcelain: porcelain comes from Delft or Makkum and is sold in Amsterdam.

You are reading "Best Time to Visit Amsterdam, Netherlands, Weather & Other Travel Tips this Weekend with Friends" Back to Top or More places to see near me 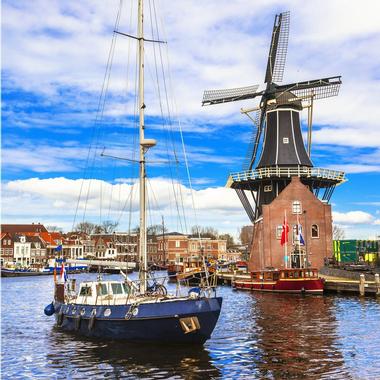 Amsterdam is laid out like a spider’s web: the canals radiate out from the central area called Centrum where the Royal Palace of Amsterdam is located. In fact, the city is 20 percent water! The Centrum is divided into the Old Side and the New Side. In Centrum you’ll find the city’s oldest church simply called Old Church as well as the New Church; the Royal Palace of Amsterdam; the Amsterdam Historical Museum; and the Begijnhof, an old convent. Southeast of Centrum is Leidseplein with its coffeehouses, nightclubs, and the Stadsschouwburg Theater House. Museumplein is filled with museums such as the State Museum, the Van Gogh Museum, and the National Museum of Modern Art.

10.Getting Married in Amsterdam 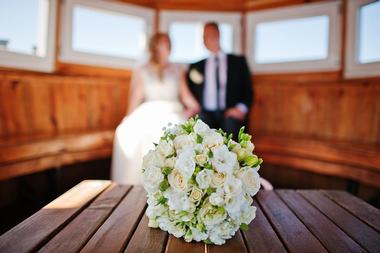 © Courtesy of AS Photo Project - Fotolia.com

Amsterdam is a unique city and so it is a popular place for weddings. In order to get married in the Netherlands, either you or your intended spouse must be Dutch and living in the Netherlands. There are many different kinds of wedding venues in Amsterdam. Hotel wedding venues include the Sofitel Legend The Grand Amsterdam and L’Europe, while there are estates such as the Huize Frankendael and West Indisch Huis. If you are interested in a church wedding some of the choices include the 17th century Koepelkerk, or Domed Church; the Schellingwouderkerk which is a little church in Amsterdam Noord; and Vondelker which is a fairy-tale like church built in 1872. There are also many outdoor wedding venues.

11.Where to Stay in Amsterdam 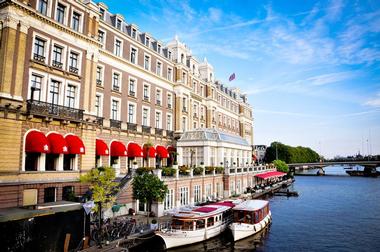 There are more than 350 hotels in Amsterdam, ranging from five star luxury hotels to affordable hostels, so there’s something to fit everyone’s budget. Luxury hotel properties include the Andaz Amsterdam Prinsengracht, Conservatorium Hotel, the Grand Hotel Amrath Amsterdam, the Hilton Amsterdam, the Hotel Pulitzer Amsterdam, and more. Some of the hotels in Amsterdam are found in old historic buildings while others are known for their modern state-of-the-art architecture. Amsterdam is becoming a year-round tourist destination. Many hotels offer significant room rate reductions between November and March to try to fill their rooms. Room rates, of course, are highest during the peak seasons.


How to see tulips in the Netherlands without going to Keukenhof

You are reading "Best Time to Visit Amsterdam, Netherlands, Weather & Other Travel Tips " Back to Top