Things to Do in Alaska: Alaska Wildlife Conservation Center 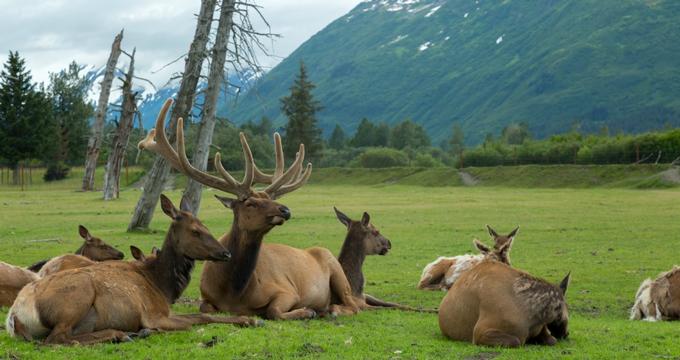 In the beautiful town of Portage is the Alaska Wildlife Conservation Center; this non-profit organization is a natural area for visitors to see animals native to the Northern State. Opened in 1993, the 700-acre center has outdoor enclosures that are connected by a 1.5-mile loop. With 15 different Alaskan species in the center, there is a diverse representation of northern animals. Throughout the year the AWCC is open and is a hub for research, education, conservation, and caring for animals.

There are many different types of animals local to Alaska that roam inside of the open-air exhibits within the Wildlife Conservation Center. Some of these animals include the black bears, Grizzly bears, Alaskan moose, elk muskoxen, red foxes, Canadian lynxes, bald eagles, porcupines, wood bison, wolves, and great horned owls. Most of the animals that come to the center are either injured or orphaned. Dedicated to treating and caring for animals in need, the animals are able to form bonds with the other animals and staff members.

The Bear Education Awareness Research Sanctuary, or B.E.A.R.S. exhibit is a popular aspect of the center. This area is where brown and black bears can be found, and it also has an educational center and research facility that works to increase the public’s awareness for the polar, black, and brown bears. There are 3 black bears that live within the sanctuary, named Uli, Kumam and Kobuk. Uli arrived in to the center in 2002 when she was found wandering alone through the town of Juneau as a cub. All of the different types of bears share similar stories of being found when they were in need, and have been able to have a great quality of life at the center.

Another popular animal in the center is the Lynx, there are two that inhabit the exhibit named Chena and Venetie. Both of the Lynxes were found in poor conditions and since then have been tended for by the center.

The Wood Bison is featured as well, as the largest land animal in the Western Hemisphere they are easy to spot in their exhibit. With their reddish colour, and distinct horns, they can be seen grazing around their habitat. To help protect the species, the center has agreed to breed and then release bison into the wild.

Bri, Deshka, Lothario, and Dirus make up a pack of wolves at the conservation center, for these fascinating creatures it is important to not be alone. As an endangered species with only an estimated 8000 wolves in Alaska, two of the wolves were specifically brought to the center to become ambassadors for their species.

Reindeer roam the Alaska Wildlife Conservation Center, due to over population some of these animals were adopted. The area could not sustain healthy animals, and to prevent starvation some of the reindeers were removed.

At the Alaska Conservation Center, there are a variety of tools used to help educate its visitors about the animals in its facilities. Field trips, classes, and internship programs are offered to encourage learning about Alaska, ecology, and conservation. On field trips, the center is home to hundreds of students of all ages every year. They provide an up-close animal experience, and with the help of guides students can learn about many animals such as bears and caribous. The center also offers a variety of Live Animal Presentations that brings smaller animals such as a ferret or porcupine to a classroom.

By teaming up with Inspired Classroom and Bear Trust International they have created science-based educational programs at the Alaska Wildlife Conservation Center. Three of these classes include Wood Bison Curriculum, Grizzly Bear Curriculum, and Bison in a Box. All of these programs are available online for free and allow students to practical math, science, and technology skills while raising conversation awareness.

At the center both the Animal Care and Naturalist Internship are available, each focus on a specific part of the institution. The Animal Care Internship requires interns to care for the animals by feeding them and cleaning their open-air exhibits. The Naturalist Internship is centered around the topics education and conservation. After receiving training from the National Parks service, they are able to spend their time working by educating the public on information specific to the wildlife of Alaska. They will also assist in educational programs about the different animals at the center. The Wildlife Conservation Center uses a variety of classes and programs to promote education on the northern state.

10 Best Things to Do in Mountain View, AR

Best Weekend Getaways in Pennsylvania: Kalahari Resorts in the Poconos

16 Best Things to Do in Deerfield Beach, Florida