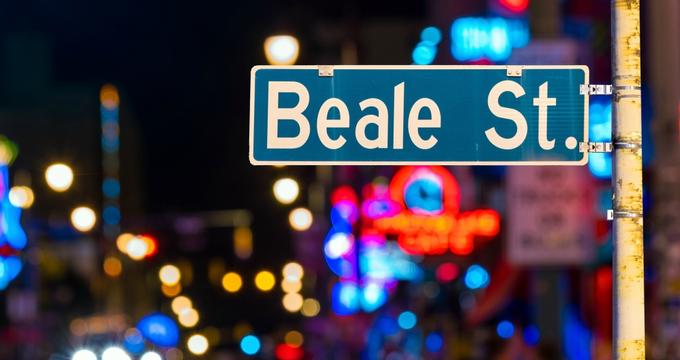 Beale Street is located in Memphis, TN and is known as the “Home of the Blues.” Visitors to historical Beale Street will get to enjoy a variety of events, clubs, restaurants, and other attractions that make the street infamous. Beale Street was the big scene in Memphis during the roaring 20’s with its carnival atmosphere. Theaters, nightclubs, stores, pawnshops, restaurants, and hot music flourished together with vices such as drinking, prostitution, gambling, voodoo, and murder. Nights would catch Stetson hats and boxback suits socializing with overalls.

Youthful women strutted down the street, while gamblers waited inside the bars for an easy mark to walk in. If the person marked by the gambler escaped from the cards and dice, he might become Little Ora’s next victim. The woman known as Little Ora was the best pickpocket from St. Louis to New Orleans. If he escaped her, he might spend his evening at PeeWee’s visiting with the musicians, playing pool or securing voodoo protection from Mary the Wonder.

The street was packed by mid-evening. Just walking one block might mean a detour around a medicine show and stopping to listen to the bluesman wandering the street, playing for nickels and pennies. Bottled whiskey was sold from a laundry basket by Machine Gun Kelly before he climbed the ladder of organized crime. The Monarch, a club on the street was called “The Castle of the Missing” because of the ability of gunshot victims to be gotten rid of at the undertaker in the back alley.

The Palace and the Daisy hosted huge burlesque shows, the corner café sold hot snoot sandwiches, Memphis jug bands could be found playing at the park, and on Gayoso, a block over, the red-light district matched Storyville of New Orleans.

Beale Street Brass Notes Walk of Fame- The sidewalks of Beale Street are marked with plaques with the names of composers, disc jockeys, musicians, music supporters, and promoters that were important to the history of the street and its Music scene. Some of these famous people include Peter Guralnick, Alberta Hunter, Elvis Presley, Lillie Mae Glover (Ma Rainey II), B.B. King, Justin Timberlake, Rev. W. Herbert Brewster, Johnny Cash, and the Blues Brothers.

Handy Park- The public park can be found on Beale Street at Third Street. It contains a large stage and smaller area for performances. These areas are used for concerts of several thousand or smaller groups. The events here are free and open to anyone who wants to attend.

Ernest Withers Collection and Museum- Ernest Withers was from Memphis and a famous photographer. He spent his life taking photos of the city he loved. This museum honors his priceless photograph collection. The educational and cultural archive found at the museum offers an accurate view of America’s African-American history of the twentieth century through photos. The photo collection spans over sixty years of history in the twentieth century and is used as a tool for teaching and learning for both instructors and students.

W.C. Handy Home and Museum- “The Father of Blues” whose real name was W.C. Handy was one of the greatest influential songwriters in the country. The writer’s home offers visitors a view into his beginnings.

Night Clubs- Some of the night clubs on Beale Street visitors will enjoy, include BB King’s Blues Club, Club 152, Club Handy, and the Coyote Ugly Saloon.

Beale Street hosts a variety of events for the whole family to enjoy throughout the year.

KIX on Beale- This is a summer concert series that is age appropriate for the whole family and takes place in Handy Park.

International Blues Challenge- This is held in the winter months of the year and includes performers from all over the world. It takes place in the large variety of clubs on Beale Street culminating in the finale at the Orpheum Theatre.

Fright Nights on Beale- Beale Street hosts costume contests at its clubs and then the winners from each club compete for a grand prize at Handy Park at midnight. Beale Street also host the annual Memphis Zombie walk to collect food for the food bank.

Beale Street offers shops that will interest all visitors. Some of these shops include the Blues City General Store, Beale Street Gift Shop, A. Schwab, Tater Reds and many more unique shops.

Beale Street offers a variety of restaurants for visitors to enjoy. Some of these include Lew’s Blew Note Bar and Grill, Blues City Café, and the Hard Rock Café.

More Things to Do in Memphis

Things to Do in Chattanooga, TN: Creative Discovery Museum