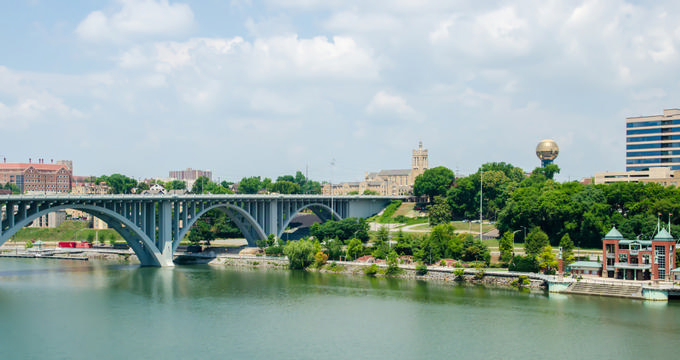 The county seat of Knox County, Knoxville is one of the largest and most famous cities in the state of Tennessee. The city is located in the eastern part of the state and has various nicknames, including 'Queen City of the Mountains' due to its proximity to the Great Smoky Mountains National Park and 'The Marble City' due to its prosperous marble quarries. Knoxville covers an area of 104.2 square miles and has a population of approximately 186,000 people, with over 860,000 in the surrounding metropolitan area. CDC information for travelers. Hours/availability may have changed. 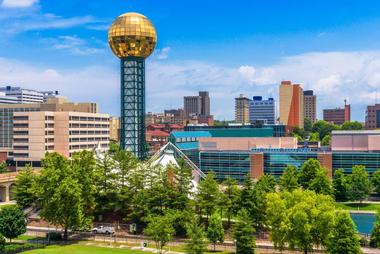 The first settlers arrived on the land that would become Knoxville in 1786 and the city was founded a few years later, in 1791. It became the first state capital of Tennessee and thrived when the railroad arrived in town in the mid-19th century. The city played its part in the American Civil War as well, with Knoxville's population supporting both the Union and Confederate sides of the conflict. When the war was over, the city began to develop even more quickly than before, with marble production being one of the most unique and important industries, along with manufacture and textiles.

The city's growth slowly declined over the years, but it hosted the World's Fair in 1982, which provided a big boost to the local economy and led to strong redevelopments and renovations throughout Knoxville. Nowadays, Knoxville is a great location for people looking for a slice of Tennessee culture, as well as housing the main campus of the University of Tennessee and offering the gateway to the Great Smoky Mountains and Appalachian region. 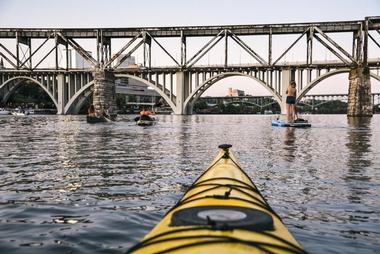 Elevation is the term used to denote how high or low an area is in relation to sea level and is most commonly measured in feet or meters. It’s an important geographical statistic for many different reasons and can directly affect a city’s weather conditions, with higher elevations resulting in lower temperatures on average. The elevation of Knoxville is 886 feet (270 m), which is much lower than the national average of 2,500 feet (760 m), but still higher than many of the biggest cities of the United State like Los Angeles, New York, and Chicago.

You are reading "Knoxville, TN Elevation" Back to Top

3.Climate and Things to Do in Knoxville 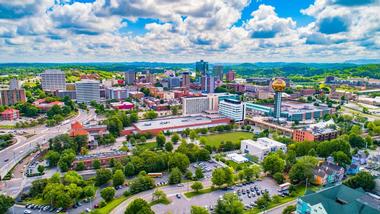 The city of Knoxville has a humid subtropical climate with warm, humid summers and quite mild winters. The hottest period of the year is from June to August, with July being the hottest month of the year and enjoying daily average highs of 88°F (31°C), while the coldest month of the year is January which has average lows of 29°F (-2°C). The city of Knoxville sees over 47 inches of precipitation each year, with several inches of rain falling each month. Some snow can also fall from December through to March.

Knoxville is a lively city with a lot to offer both residents and visitors. The Downtown district is filled with 19th century architecture, while the city is also home to key museums and art centers like the Museum of East Tennessee History and Knoxville Museum of Art. The city also has a zoo and nature center, as well as various green areas for fishing, hiking, scenic trails, cycling, and more. Knoxville also has a lot of live shows and cultural events running throughout the year, including the popular Christmas in the City event in December and the Knoxville Marathon.

You are reading "Knoxville, TN Elevation" Back to Top

The East Tennessee Historical Society (ETHS) is an organization dedicated to the history of East Tennessee. In addition to presenting and preserving the heritage of the area, the ETHS also collects and preserves historically significant artifacts and educates the community on about East Tennessee and its surrounds. Established 1834 just 38 years after the state of Tennessee was founded, the East Tennessee Historical Society (ETHS) recorded, interpreted and presented the history of the development and settlement of the area. The educational mission of the ETHS is also to engage the public and highlight the importance of history.

The Natalie L. Haslam Signature Gallery features the signature exhibit, Voices of the Land: The People of East Tennessee, which tells the story of three centuries of life in the mountain and valley land through an array of artifacts, images, and modern technology. The Rogers-Claussen Gallery features a variety of changing exhibitions throughout the year that explores a variety of historical topics about the local region and further afield.

The Museum of East Tennessee History’s collection features more than 13,000 artifacts and objects of material culture that were either used or made in the region. The Collection aims to interpret, preserve and promote the history of East Tennessee's 35 counties and illustrate life in East Tennessee in the past. Highlights of the Collection include paintings, decorative arts and furniture, textiles, quilts, and Civil War items from both the Confederate and Union armies. Traveling Exhibits at the Museum are presented from time to time and focus on themes with broad, regional appeal, such as ‘Reading Appalachia,' and ‘Made in Tennessee.’

The East Tennessee Historical Society offers a variety of educational and creative programs that aim to inspire and encourage students and visitors with interest in the history of East Tennessee. Programs include workshops, lectures, homeschooling programs, scholarships, and the sponsorship of National History Day.

Back to: Best Things to do in Knoxville, TN

You are reading "Knoxville, TN Elevation " Back to Top

The Muse Knoxville is a not for profit institution and children's museum situated in Knoxville, Tennessee. The museum originally formed in 1960 and was known as the Student’s Museum. Further along the timeline, it changed name to East Tennessee Discovery Center and in 2013 became known as The Muse Knoxville.

Measuring close to 4,000 square feet, the space provides informative, educational and interactive experiences for children of all ages. The Muse runs an extensive range of educational programs and is home to a variety of inside exhibits and an outside play area. The building also contains a gift shop, private meeting room, lunchroom, restrooms, hearing impaired and hearing sensitive resources, and wheelchair accessible public spaces.

Admission fees are applicable for all aside from military personnel, educators, seniors over 65 years of age and children under two enter who enter free of charge. A range of memberships are available to the public with the purchasing of these enabling discounts on a number of services throughout the center. The museum relies on corporate partnerships, capital campaigns, gifts, donations, private events, educational programs, group meetings and community events to maintain the center and raise funds. For private or public events, sign language interpreters can be booked with two weeks notice.

The Planetarium is Knoxville’s only public access Planetarium. Visitors who enter the Planetarium must be aged 4+ and can see shows every hour although times may change due to Field Trip Programs. The shows are played through the Warped Media Full Dome Projection System. Shows are 20 - 40 minutes long and each video has an age certification. An example of this is Rust Rocket’s Last Blast, certified for children of seven years of age and older. Subjects in the videos range from black holes, electromagnetic spectrums, how telescopes work, stars, planets and other space related topics.

A further space exhibit is the Discovery Shuttle which is open to children of all ages. The shuttle has an entry door and once inside children can discover the inner workings of shuttles with interactive displays, hands on buttons, levels and screens. There is a cockpit, foam seating and windows with a view of stars throughout this spacious exhibit.

The Make Space is an exhibit which involves team work, creativeness and parents and children designing together. The exhibit is on rotation and changes crafts and activities frequently. Another creative and construction based exhibit is The Build Space. The Build Space is a soft play area with multicoloured soft shapes and toys which encourages the practice of engineering, balance and design with the shapes. Children can use the area to use a variety of testing areas and construction materials.

The Live Smart! Stay Well exhibit helps children to learn about food, health, the weighing of food on scales and nutrition. Full of grocery items to be felt, picked up and looked at, the area also has a set of large weighing scales to use, a play area, fenced in area for children still crawling and a series of areas with tills and toy money. The STEM station is an obstacle course for children's minds. The area is for children of 8 years plus and involves activities which have multiple outcomes and rely on the inquisitive nature of children to channel learning. The area is on rotation and often changes the activities.

Further attractions are the car lego ramp for children of all ages and a comfy play area for children who want to read and relax. The museum also has baby changing area next to the restrooms as well as hooks for coats and two aquariums with a range of fish, ecosystems and information plaques.Outside is a huge play area with slides, monkey bars, a climbing wall and other features. There is also the Science Garden and a floor map of the solar system.

The muse has a variety of educational programs which run throughout the year. Field Trips can be booked ahead for school groups by an educator. The themes are Garden We Grow, Live Smart! Play Smart!, Be Well and Planetarium on Demand and are suited to specific school grades. The Muse also designs school programs for single classroom groups in the form of its Outreach Program. Homeschool Tuesdays for Grades 5 to Kindergarten allows for a series of lessons taught on certain topics at the museum including STEM exploration and Chemistry of Water. Muse Mondays sees a weekly calendar full of sensory activities, craft projects and stories at Muse Stage too.

A program for families is STEM nights where members of the public can go to The Muse for two hours of programming from the museum’s educators. The event is open to 150 people and has in the past included activities involving art, math, engineering, science and technology. Many other programs are in place as well as Youth Programs involving the Teen Advisory Committee and Youth Service Opportunities.

Back to: Best Things to Do in Knoxville, TN

You are reading "Knoxville, TN Elevation " Back to Top

3 Best Things to Do in Spring Hill, Tennessee

4 Best Things to Do in Shiloh, Tennessee

23 Best Things to Do in Nashville, TN