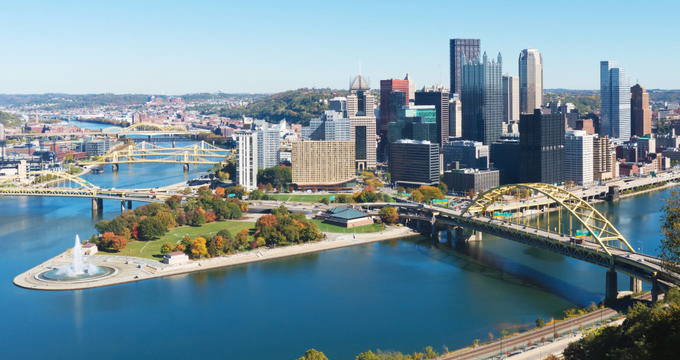 The county seat of Allegheny County, Pittsburgh is a major city in the state of Pennsylvania. The city is located in the western section of the state and is known as 'Steel City' due to its historic steel-related industry. Pittsburgh also has the nickname 'City of Bridges' due to the fact that more than 400 bridges can be found around the city's 58.35 square miles. Pittsburgh has an estimated population of a little more than 300,000 people, with over 2.3 million in the surrounding metropolitan area. CDC information for travelers. Hours/availability may have changed. 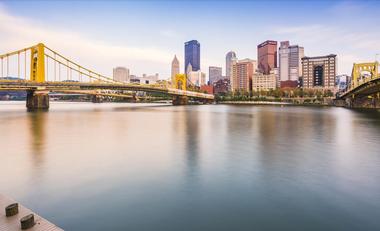 Pittsburgh has a rich history and a lot of stories in its past. The city was under the control of the French Empire for many years, before passing under British control and earning its name of Pittsburgh in 1758 in honor William Pitt, leader of the British government and later the Prime Minister. Pittsburgh was incorporated in 1794 and became an important transportation location due to its situation at the confluence between three rivers: the Ohio, Allegheny, and Monongahela. Pittsburgh served as an important link between the Mid-Atlantic and Midwest regions, with the nearby Allegheny Mountain range offering a lot of mining opportunities.

As time went by, Pittsburgh became a major economic and business hub for the state of Pennsylvania and the entire United States, second only to New York City and Chicago for number of jobs. Steel has always been a big part of Pittsburgh's economy, as well as other industries like petroleum, aluminum, tech, and more. In the modern era, global companies like Apple, Google, Uber, and Microsoft all have major offices in Pittsburgh, with the city also being home to many museums, attractions, art centers, live entertainment, green spaces, and a rich sport culture. 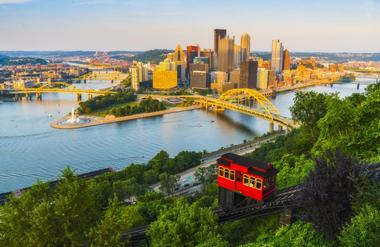 The elevation of a town or city tells us how high or low it is in relation to the mean sea level of Earth. Elevation is an important geographical term that can be important for a variety of uses, and the elevation of an area can influence its weather conditions too, with higher elevations resulting in lower average temperatures. The elevation of Pittsburgh is quite unique in that it varies quite significantly around the city, with a difference of 660 feet (200 m) between the highest and lowest points.

The highest elevation point in Pittsburgh is found at the top of an unnamed hill in the Perry North neighborhood, at a height of 1,370 feet (420 m), while the lowest point is part of the Ohio River that is situated at an elevation of 710 feet (220 m). This means that Pittsburgh's general elevation is much lower than the national average of 2,500 feet (760 m), but isn't too far away from the mean elevation of Pennsylvania, which is 1,100 feet (340 m).

You are reading "Pittsburgh Elevation" Back to Top

3.Climate and Things to Do in Pittsburgh (Pittsburgh Elevation) 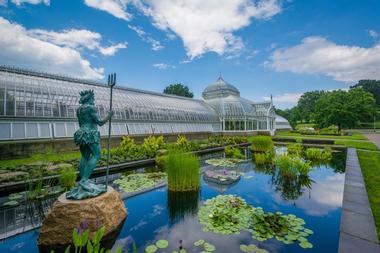 Whether you're interested in sport, history, art, live entertainment, or recreational activities, you'll find plenty of options to enjoy in and around the city of Pittsburgh. The city is broken up into various districts, each with their own unique bars, restaurants, architecture, parks, museums and more. The Golden Triangle is one of the most impressive areas of the city, containing 30 skyscrapers and old historic buildings that have been converted to residences, while the North Side features a lot of key attractions including the Andy Warhol Museum, Carnegie Science Center, and Heinz Field stadium.

You are reading "Pittsburgh Elevation" Back to Top

The Frick Art & Historical Center is complex of historic buildings and museums formed around the Frick family's 19th-century residence known as ‘Clayton’ in the heart of Pittsburgh. Glorifying the Gilded Age the Art Center features a collection of buildings, including an Italian Renaissance-style museum with an array of works that focus on the life and times of art collector and industrialist, Henry Clay Frick, who lived from 1849 to 1919.

The Frick Art Museum began as an 1860s-built Italianate-style house bought by the Fricks shortly after they married in 1881 and served as their primary residence from 1883 to 1905. The mansion was maintained and remodeled by several architects before being opened to the public in 1990. The Car and Carriage Museum was converted in 1997 from the original 1950s carriage house, and the Frick Collection, which was established by the Fricks when they moved to New York in 1905 was transferred to the Center.

Set on 5.5 acres of beautifully manicured gardens and lawns in the vibrant Point Breeze neighborhood, the complex features the Frick’ 19th-century mansion known as ‘Clayton,’ the Car and Carriage Museum, the Frick Art Museum, the Frick Children’s Playhouse, the Greenhouse, and The Café.

Located in the heart of the Frick’s 5.5-acre campus is the 3,000-square-foot Grable Visitor Center, where visitors can learn about the Frick family and Pittsburgh history, the collections of the Museum and schedule a tour of the Center. There are friendly and welcoming Museum Experience Associates are on hand to help with questions and information about the Frick, along with an iPad bar and touch table for interactive and immersive experiences, Learning and Reading Rooms, and a gift shop and Museum Store. Designed by Schwartz/Silver and Associates, the building features Pennsylvania sandstone, wooden ceilings, and a porcelain tile and herringbone patterned floor.

The meticulously restored 22-room mansion home of the Henry Clay Frick family (1882–1905) is known as ‘Clayton’ and features an impressive array of fine and decorative art objects purchased by the Fricks through their lifetime. When it was acquired, the mansion was an 11-room, Italianate-style building set on just over an acre of land and fronted Penn Avenue in the residential neighborhood of Point Breeze. After outgrowing the family home and moving to New York in 1891, architect Frederick J. Osterling transformed Clayton into the 23-room chateau-style mansion it is today. Visitors can enjoy docent-led tours of the mansion and gain an insider’s look at life at the turn of the 20th century and a better understanding of Pittsburgh during the Gilded Age.

An excellent automobile collection features a Brougham from 1881, a 1903 Baker Electric, a Bailey Electric Phaeton and a Keystone Sixty-Six Roadster dating back to 1909, and a 1914 Rolls-Royce Silver Ghost Touring Car. Other cars include DaimlerLaudaulet from 1912, a 1914 Ford Model T, a 1924 Auto Red Bug Flyer, and an American Bantam Convertible Coupe from 1940.

The Frick’s 5.5-acre site is home to lush manicured gardens filled with a diverse selection of trees and a newly renovated active greenhouse. The first greenhouse served the Frick family from 1897 through the 1970s and was used to grow flowers, tropical plants, and vegetables year-round. The original greenhouse was rebuilt in 1897 by architects Alden & Harlow, and many of the vegetables and fruits are used in the cuisine served at the café.

Designed by Alden & Harlow architects in 1897, the Playhouse was a center of activity for children of the Frick children and featured a bowling alley, a dark room used for photography. Today, the building houses offices and are not open to the public.

The Education Center is a dedicated learning space with three classrooms, which are equipped with modern technologies that enhance the variety of high-quality, artifact-based programs.

The Frick Art & Historical Center is located at 7227 Reynolds Street in Pittsburgh and is open Tuesday through Sunday from 10:00 am to 5:00 pm daily and from 10:00 am to 5:00 pm on Fridays. Admission to the Frick Art & Historical Center and the Gardens is free, however, Clayton tours and special exhibitions require a small fee.

Back to: Best Things to do in Pittsburgh

You are reading "Pittsburgh Elevation " Back to Top

Exuding an air of style and sophistication and boasting a seamless blend of urban chic and cultural cool, the Renaissance Pittsburgh Hotel is one of the most unique hotels in Pittsburgh's Cultural District. Located in the historic Fulton Building in downtown Pittsburgh, the 14-story architectural gem, which is listed on the Register of Historic Places, offers luxurious accommodations, deluxe amenities and unparalleled service to provide both business and leisure travelers a comfortable and stylish urban retreat.

The Renaissance Pittsburgh is conveniently located in the heart of the central downtown district with easy access to many of the city's top attractions such as the Rivers Casino, PNC Park, and Heinz Field, home of the Pittsburgh Steelers, as well as numerous restaurants, bars, museums, galleries, theaters, and shops.

The Renaissance Pittsburgh Hotel offers 300 elegantly appointed guest rooms and suites that boast an irresistible blend of style, sophistication, and comfort. Each room is a haven of tranquility and peaceful escape away from the hustle and bustle of downtown Pittsburgh with deluxe beds dressed in plush beddings and imported linens, contemporary decor in soft, neutral hues, exceptional amenities and in-room entertainment and breathtaking views of the Allegheny River or downtown Pittsburgh.

Guests can choose from several unique rooms and suite types, from stylish King rooms with city or river views to luxurious Club Level suites, all of which are beautifully decorated and comfortable furnished. Modern amenities are standard in every room and include luxurious, imported bedding with custom duvets, down comforters and pillows, and cotton-rich linens, flat-screen LCD televisions with cable/satellite channels (including ESPN, CNN, and HBO), Internet browser and Web TV, Sony alarm clocks and iPod docking stations, mini-fridges, coffee and tea-making facilities, and complimentary wireless Internet. Private en-suite bathrooms have shower-over-bath combinations, plush bathrobes, and deluxe bath products, and rooms feature individual climate control with heating and cooling, in-room safes, electrical adapters, hairdryers and iron and ironing boards. Additional room extras include baby cribs and rollaway beds, which can be arranged on request.

City View King or Queen Rooms are 250 square feet in size and can accommodate up to three guests. These rooms feature king or queen-size beds, en-suite bathrooms with shower-over-bath combinations, plush bathrobes, and deluxe bath products, and a spacious sitting area with armchair, ottoman, and gorgeous city views.

City View Queen Rooms are 312 square feet in size and can accommodate up to five guests with two queen size beds, one rollaway bed and en-suite bathrooms with shower-over-bath combinations, plush bathrobes, and deluxe bath products. Sitting areas have ottomans and armchairs and look out over downtown Pittsburgh.

19 Best Things to Do in Lehigh Valley, Pennsylvania

7 Best Things to Do in Wayne, Pennsylvania

23 Best Things to Do in Pittsburgh, Pennsylvania