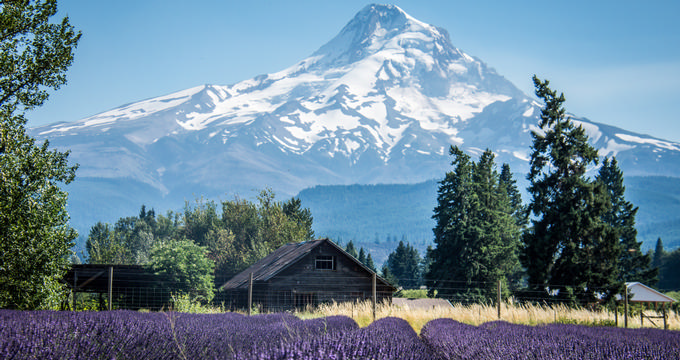 Mt Hood, also known as Wy'east by the Multnomah tribe of Chinookan people that live in Oregon, is a volcano in the Cascade Volcanic Arc that also includes a dozen other volcanoes including Mount Rainier, Mount Baker, Mount Garibaldi, and Mount Adams. Located less than an hour away from Portland, Oregon, Mt Hood sits on the border between the two Oregon counties of Hood River and Clackamas. CDC information for travelers. Hours/availability may have changed. 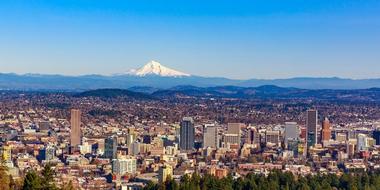 Mt Hood is the highest mountain and highest point in all of Oregon, as well as being one of the most prominent peaks in the United States. Despite being a volcano, Mt Hood is currently considered dormant and hasn't really shown any activity for the last two centuries. However, geological experts do still estimate that there's between a 3 and 7% chance of an eruption occurring over the next few decades.

The Multnomah name for Mount Hood, Wy'east, comes from an old legend involving two sons of a great spirit that fell in love with a beautiful maiden and battled for her heart, destroying land and forests in the process. When he saw the damage done by his sons, the great spirit killed them, and the women they loved, and made three mountains, including Mount Hood, to honor the deaths of all three. 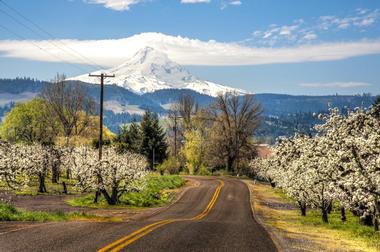 Elevation is an important geographical term that refers to how high a location is in relation to sea level. The elevation of Mt Hood has actually changed quite a lot over the years as different surveys have taken place and the technology and methods used to determine the elevation of mountains and other high points have changed. The official elevation of Mt Hood is 11,249 feet (3,429 m), which was calculated by a United States National Geodetic Survey in 1991, using the NAVD 88 system.

For a long time, Mt Hood was believed to have the highest elevation of any point in North America, but this quickly changed when it was discovered that the mountain was nowhere near as high as first believed. The actual highest point in North America is Denali, which has an elevation of 20,310 feet (6,190 m) above sea level, making it almost twice as tall as Mt Hood. Hundreds of other mountains around the continent are taller than Mt Hood, but it is still the point of highest elevation in its native state of Oregon and, due to its high prominence, it can be seen from distances of up to 100 miles away.

You are reading "Mt Hood, Oregon Elevation" Back to Top 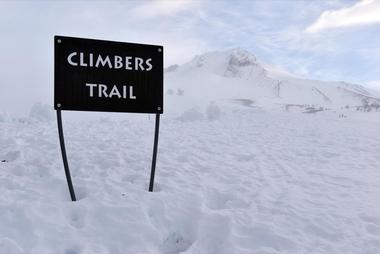 Since Mt Hood has the highest elevation of any point in Oregon, it represents a popular challenge to climbers and mountaineers. There are several routes to the top and the climb is relatively less technical than other major mountains around North America, but does still require skill and experience and can be very dangerous, with dozens fo people needing to be rescued each and every year. Around 10,000 people attempt to climb Mt Hood on an annual basis, but many have died along the way. Climbing Mt Hood is very popular, but it isn't the only way to enjoy this mountain, with various other options available for people who are less active or physically fit, or simply not interested in climbing all the way to the top.

One clear example is the Timberline Trail. This is a very popular hiking trail that goes all the way around Mt Hood. At its highest point, the Mt Hood Timberline Trail has an elevation of 7,300 feet (2,200 m). It was constructed back in the 1930s and is one of Oregon's most popular outdoor recreation spots. It runs for over 40 miles and provides outstanding views of Mt Hood and the surrounding landscapes. Along with hiking, skiing is also popular in the Mt Hood area, with six different ski areas nearby. The nearby Mount Hood National Forest is also filled with beautiful hiking trails of all kinds, so there are plenty of ways to stay active around Oregon's highest point.

You are reading "Mt Hood, Oregon Elevation" Back to Top

Located in Hood River, Oregon, the Western Antique Aeroplane and Automobile Museum showcases a collection of antique North American aircraft, automobiles, motorcycles, and artifacts related to the transportation industry. The Western Antique Aeroplane and Automobile Museum was created to display the collections of airplane collector Terry Brandt, whose parents served as fixed base operators at Marysville, California’s airport and later operated a fight school in the area.

As a child, Brandt grew up with a love for flying and aircraft, learning to fly a plane at the age of 12 and purchasing his first collector airplane at the age of 19. In 2006, when faced with the prospect of needing to parse down his collection at auction, Brandt formed a nonprofit organization for the creation of an aviation and transportation museum. The museum’s collections were initially formed with a donation of 42 airplanes by Brandt, along with 20 vintage North American automobiles to be displayed. In 2007, the museum opened to the public within a 95,000-square-foot gallery space. Subsequent additions were made to the building in 2009, 2013, and 2016 to accommodate growing collections, including the addition of extra hangars for display space.

Today, the Western Antique Aeroplane and Automobile Museum showcases more than 315 airplanes, automobiles, and other aviation and transportation-related memorabilia. The museum is operated as a nonprofit organization committed to historic vehicle preservation and public education regarding the aviation and automobile industries and the history of transportation technology in North America. It is open to the public daily, with the exception of major national holidays, and is regarded as the second-highest-rated attraction in the Hood River area by TripAdvisor.

WAAAM’s collection is one of the largest collections of still-operated antique airplanes and automobiles in North America, showcasing a variety of rare, unique, and historic models. The museum’s Curtiss JN-4D "Jenny" barnstormer aeroplane is considered to be the “crown jewel” of its collection, acquired by the museum’s chief pilot, Ben Davidson, from dismantled storage in an Ohio barn. The aircraft was designed by B. Douglas Thomas and Glenn Curtis and was the preferred trainer used by the United States and Britain in World War I, with an estimated 95% of American and British forces using them throughout the war. Following the war, the plane’s manufacturer repurchased many of the crafts and remarketed them as civilian planes, which popularized the practice of acrobatic touring “barnstorming.” The machines were also used to deliver air mail flights throughout the early part of the 20th century.

Other planes in the museum’s airplane collection include several Piper J-3 Cub and WACO Taper Wing planes, as well as antique planes by manufacturers such as Aeronica, Stearman, and Stinson. Automobile collections focus on the “Golden Age of Transportation” from the 1920s through the 1940s, including a 1923 Model 48 Sportif Locomobile, a luxury line produced by Ford in the early 20th century. Other classic Fords on display include the Model A and Model T cars. A 1909 and 1929 Franklin are also showcased, along with a 1914 Detroit Electric and a number of Packard and Studebaker models.

Nearly 30 antique and classic motorcycles are displayed, including vehicles produced by Harley Davidson, Indian, Cushman, and more. Many motorcycles are integrated into larger airplane and automobile displays and are often missed by visitors, so WAAAM encourages visitors to play a “hunt the motorcycle” game and check in with information desk staff with their results after touring the museum. A collection of antique military vehicles features equipment from the World War II, Korean War, and Vietnam eras, while other collections showcase gliders, tractors, bicycles, and transportation-related memorabilia. A special museum section is also dedicated to historic women in aviation and transportation fields, and a children’s area provides safe activities for younger visitors.

Group rates and tours are available for small groups and organizations, including field trip opportunities for elementary and secondary school groups. Every second Saturday, drives in the museum’s antique cars and military vehicles are offered, with veterans encouraged to share their war stories with drivers and docents. Indoor demonstrations and activities for visitors are also offered. A variety of courses are offered for amateur vehicle enthusiasts, including Model T driving lessons and a driving school program oriented toward operating and understanding classic cars of the 1930s, 1940s, and 1950s. A historic vehicle restoration program also offers a five-level certificate training, and a youth summer camp introduces aviation principles to students ages 9-12. Public special events throughout the year include a Traffic Jam Car Show, a Hood River Annual Fly-In, and a WAAAM Parts Swap event.

More Things to Do in Oregon

You are reading "Mt Hood, Oregon Elevation " Back to Top