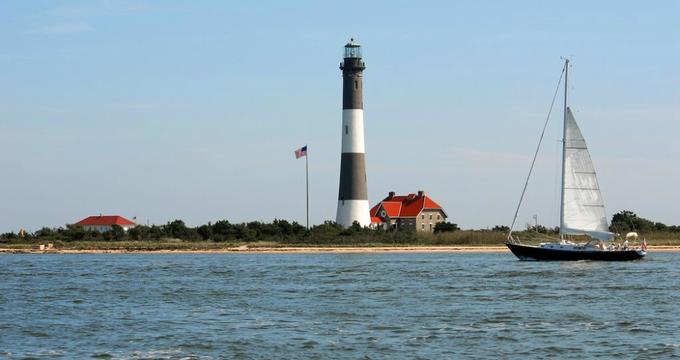 The Fire Island Lighthouse is located on the Fire Island National Seashore, a barrier island landscape just a 60-mile drive from New York City, in Long Island. A visit to the lighthouse offers miles of hiking trails, a glimpse of the keeper’s quarters, and exhibits on the history of the park and lighthouse. The 180-foot stone and brick lighthouse began operating in 1858 and was temporarily decommissioned by the U.S. Coast Guard in 1974. Certain attractions may be temporarily closed or require advance reservations. Hours/availability may have changed. 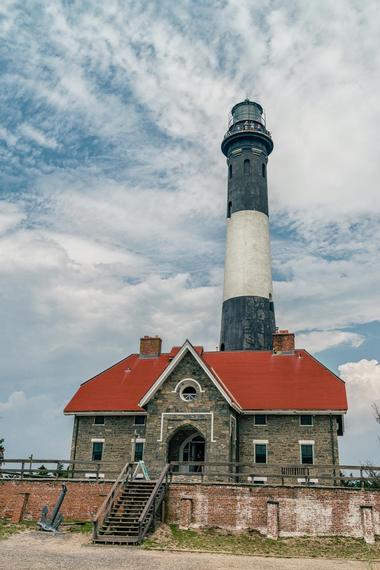 Originally built to mark the western end of Fire Island, the lighthouse now stands approximately 5 miles from the inlet, due to the island’s infill from sand accumulation over the years. The lighthouse is built on a foundation of Connecticut River Blue stone and the conical tower is painted white with four black bands. Its original first-order Fresnel lens was installed in 1857 and replaced in 1933. The original lens is on display in the lens building, adjacent to the tower. The Fresnel lens was developed in the early 1800s for lighthouses by a French physicist to allow lighthouses to be visible from greater distances with much smaller equipment. First order refers to the size of the lens, which stands at 12 feet tall and 6 feet wide. Today, two counter-clockwise rotating 1,000-watt bulbs light the tower. The rotation gives the appearance that the light flashes every 7.5 seconds, and the light is visible for over 20 miles. Visitors can climb the 182 steps to the top of the lighthouse tower and see views of Fire Island, Long Island and, on a clear day, the New York City skyline.

A boathouse onsite displays U.S. Coast Guard artifacts, including a surfboat used by the United States Lifesaving Service. The USLSS, or “surfmen” as they were known, were first stationed on Fire Island in 1848. They rescued over 7,000 people between 1871 and 1915 alone. Additional exhibits illustrate the daily life of lighthouse keepers through photographs, memorabilia, and artifacts as well as the history of the lighthouse and its preservation. The lighthouse has been on the National Register of Historic Places since 1981. 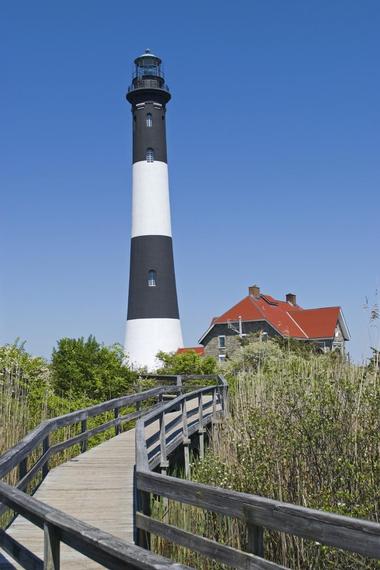 Fire Island is a significant landmark for those arriving to the New York Harbor, and was often the first sign of land for immigrants making the trans-Atlantic journey at the turn of the 20th century. Originally built as a 74-foot tower in 1826, the lighthouse was ineffective due to its lack of height. The structure was demolished and the stone was used to rebuild the current lighthouse in 1857. Originally, the red brick tower was painted a creamy yellow color; the black and white striped markings were painted in 1891. After the lighthouse was decommissioned in 1974, the site was declared to be within the boundaries of the National Seashore. However, the Parks Service did not have the funds to properly preserve and maintain the site.

You are reading "Things to Do on Fire Island, NY: Fire Island Lighthouse" Back to Top 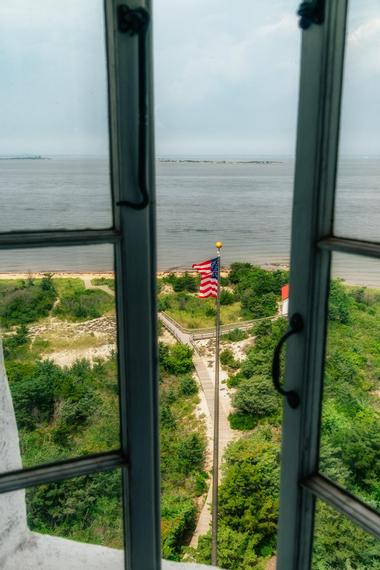 Tours of the lighthouse are available daily. Visitors must be at least 42” tall to climb the tower stairs. Special tours may be arranged in advance for groups, including sunset tours. School group tours offer three 45-minute segments based on a tour of the lighthouse tower, a U.S. Lifesaving Service lecture and demonstration, and a nature walk, which includes the boathouse and lens house. Special events are ongoing at the lighthouse and keeper’s quarters. Events have included live music performances and happy hour sunset tours, car shows, art shows, and tours for veterans and other special groups. A Lightkeeper’s Behind the Scenes tour takes place monthly, as do special evening tours. During summer months, the site offers historical re-enactments of the U.S. Life Saving Service’s beach apparatus drills.

More Things to Do on Fire Island

You are reading "Things to Do on Fire Island, NY: Fire Island Lighthouse" Back to Top

How to Get to Fire Island, NY

There are many things to do in and around New York City, especially on Long Island. Home to a diverse range of landscapes and areas, from the bustling downtown streets of Brooklyn and Queens to the luxury residences and upscale resorts of the Hamptons. Long Island is a great place to visit and it's also conveniently located near one of New York's most popular summer retreats: Fire Island.

Fire Island is the long, centrally located island of the Long Island barrier islands. It runs for around 31 miles in total and is very narrow, measuring just 160m across at its thinnest points. The island is part of Suffolk County and is home to various little villages and hamlets. Thousands of people flock to Fire Island when the sun starts shining and the summer months come along, and if you're interested in visiting Fire Island too, you'll need to know how to get there. Best Things to Do on Fire Island, New York

Getting to Fire Island

Getting to Fire Island is relatively easy as there are several different methods available to you. It's important to note that cars are not allowed to actually drive on the island, so you'll need to travel by foot, bicycle, or boat during your stay on Fire Island.

Getting to Fire Island by Car

Despite cars not being allowed on the island, Fire Island is connected to Long Island by two long bridges that can be driven on. These bridges are found off Sunrise Highway. One of them leads to the eastern part of the island and offers access to Smith Point County Park, while the other is located at the western end and offers access to Robert Moses State Park. You can drive over these bridges and pay to park your car in either location, but you'll have to leave it there and won't be able to drive any further around Fire Island itself.

Getting to Fire Island by Boat

Getting to Fire Island by Ferry

Taking the ferry is the simplest and most popular way to get over to Fire Island, and there are various services connecting Long Island to Fire Island and the various other barrier islands. The Davis Park Ferry, for example, offers services to Watch Hill for $9 one-way. The Sayville Ferry Service, meanwhile, offers ferry trips to various locations around Fire Island including Water Island, Cherry Grove, and Sailors Haven. This company has been in operation for over a century, so is one of the most trusted names in the business. It's also the cheapest ferry to Fire Island, with tickets costing just over $8 in the summer months and a little extra in the winter.

There's also Fire Island Ferries, which focuses on the west side of Fire Island and provides easy, convenient access to multiple communities. Ferries from Fire Island Ferries run on an hourly basis, costing $10 for a one-way trip. It's important to note that ferries to Fire Island operate on different schedules at different times of year. The summer is the most popular period for Fire Island tourists, so there are more ferries at this time of year and far less during winter or autumn.

Things to Do on Fire Island

When you get to Fire Island, it's good to have a few ideas of how you plan to spend your days. There are various open spaces and landmarks to visit around Fire Island. Read on for some information on the best things to do.

Located at the far west end of Fire Island, Robert Moses State Park covers almost 900 acres of land and offers all sorts of outdoor recreation opportunities that nature lovers will adore. The park has been in existence since the early 20th century and provides some stunning views of the Atlantic Ocean, with the various wildlife and wilderness here helping you feel a million miles away from the noise and lights of Long Island and New York City. The park features an 18-hole golf course, picnic areas, fishing piers, sports courts, hiking trails, and lots of soft sandy beaches too.

The Fire Island Lighthouse is actually located within Robert Moses State Park on the western side of Fire Island. It's one of the island's most visited landmarks and was originally constructed way back in 1826, before undergoing major renovations in 1858. The lighthouse was in operation for decades, before going out of use in 1974 and being replaced by a light atop the Robert Moses water tower. The lighthouse is on the National Register of Historic Places and is fully open to the public. You can explore this lighthouse at your leisure, but be prepared to climb up almost 200 steps if you want to get to the top.

One of the most beloved and beautiful spots on Fire Island, Sailors Haven is a gorgeous sandy bay on the Fire Island National Seashore. It's found roughly around the center of Fire Island and is easily accessible by boat or foot. There's a pretty marina here and easy access to the famous 'Sunken Forest' nearby too, but the real star of Sailors Haven is the wonderful sandy beach. Lifeguards are on duty during the summer and there are various local amenities including snack stands, picnic areas, grills, and a bathhouse.

You are reading "Things to Do on Fire Island, NY: Fire Island Lighthouse " Back to Top

12 Best Things to Do in Naples, New York

25 Best Things To Do in Brooklyn, NY

17 Best Things to Do in Montauk, Long Island

25 Best Things to Do in Queens, New York