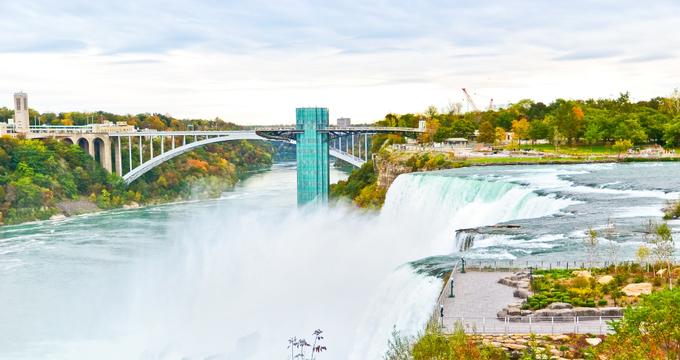 Straddling the international border between U.S. and Canada is the famous Niagara Falls, as well as a whole range of vistas, boat rides, and other activities that visitors can look forward to when they visit. It’s roughly a seven-hour ride away from New York and although it’s a bit challenging to travel to Niagara Falls from NYC and back in one day, it is quite possible. There are, however, many reasons to stay there, whether as a group or alone. Either way, you’re going to want to know how to get there first.

How to Travel from New York to Niagara Falls

You can get to Niagara Falls either by car, train, bus, or plane.

If you’re not the type to fuss over long car rides you can try renting a car in New York and take a 400 mile drive to Niagara Falls. The whole trip will take seven hours but it may take a bit longer if you get stuck in traffic. The best way to beat the time is to leave the city as early as possible.

There’s an Amtrak service in New York that will take you all the way to Niagara Falls. It takes approximately nine hours to get there this way, although you won’t have to worry about having to drive there yourself and you can even sleep on the train.

The bus is a lot slower. The whole trip would be about 9 hours but can sometimes extend to 11. But just like the train, this beats driving if you don’t feel like it, and it’s a lot cheaper compared to the alternatives.

Flights from New York to Niagara Falls are estimated to be only 45 to 60 minutes, but you also have to consider the travel time to the airport and getting through airport security. Overall, however, this is by far the fastest way to get the Niagara Falls even when the whole thing stretches out to three hours. It’s the most convenient too. The only downside is that it’s also the most expensive way to travel, but if you’re lucky you can bag yourself some discounted fares if you plan your trip ahead and book early.

If you plan on flying to Niagara Falls, you might want to consider taking up a one-day tour offered by agencies in New York City. The tour will involve air travel, so it may be well worth the added cost if you want to make the most of your trip.

One important thing to note with these kinds of tours is that they will go to both the Canada and America sides of the falls, which means that you will need a passport and, if applicable, a visa to participate.

As mentioned before, you don’t really have to make your visit to Niagara Falls a one-day affair. If you can fit it in your schedule, try spending a night in the place - after all, you’ve earned it after making it after driving for seven hours straight.

Those tours also have a multi-day counterpart, where you can book a tour that lasts for 2 to 3 days. Some agencies will give tourists an opportunity to shop, see the Thousand Islands, and other attractions. You’ll also have accommodations for the nights.

Things to See in Niagara Falls

Obviously you’re going to Niagara Falls to see it, more than anything. But that doesn’t mean that you can’t make the most of your trip, especially when you’re there for a couple of days. There are a lot of things that are worth seeing just as much and are must-sees in their own respect.

Hornblower Boat Tours: If seeing the falls isn’t enough, why not try to get closer by getting on a Hornblower Boat Tour? This boat will take visitors to the foot of the American Falls before moving towards the Canadian Horseshoe Falls. Don’t worry about getting wet. You’ll be given a disposable rain jacket. If you’re interested, you might want to book a seat online because it may be too late to get one when you’re already there, especially since they get filled up fast during the summer. They operate from May to October.

Journey behind the Falls: As the name suggests, you’ll and some other visitors will be guided through a tunnel which leads to a place behind the waterfalls. So if you think the Hornblower Boat Tours aren’t enough for you, this is what you should try. This is as close as it gets, really.

Skylon Tower: Want a bird’s eye view of Niagara Falls? You’re going to love the Skylon Tower. It has an observation deck that’s 775 feet or 236 meters above the falls itself. Once you’re through taking in the breathtaking view, you can enjoy dinner at either the Revolving Dining Room or the Summit Suite Dining Room.

Whirlpool Aero Car: Equally breathtaking is the Niagara Gorge, a chasm that will overwhelm you even before you see the falls themselves. Get a good look at this with the Whirlpool Aero Car, an attraction that’s been taking people across the gorge on six sturdy cables since 1916. This is open seasonally so long as the weather permits.

Niagara Fallsview Casino: There’s a 2.5 million sq. ft. complex that’s home to more than 150 gaming tables, 3,000 slot machines, a five-star hotel with 368 rooms, lots of fine dining restaurants, and more. Like most attractions, the place is also located in a way that it overlooks the Niagara Falls, giving the best views possible.

Clearly, there’s a lot to do there, so you’re going to want to try to leave early and make the most of the trip. Better yet, take a multi-day trip. Don’t forget to take pictures! The breathtaking views of the falls are just way too beautiful to pass up.

Things to Do in Brooklyn: The Wyckoff House

Best Things to Do in Brooklyn: Building 92

Mohonk Mountain House, a Family Vacation in the Catskills

25 Best Things to Do in Syracuse, NY

12 Best Things to Do in Hudson, NY