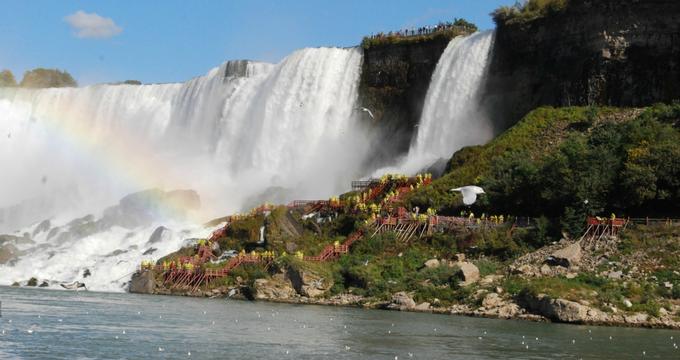 People everywhere are strongly attracted by the mysteriousness of the caves, and New York caves are very popular tourist attractions. Some no longer exist, like the Cave of the Winds, while others, like Clarksville Cave, are very difficult to explore. One of the most interesting and the most popular is Howe Caverns, which has a number of tours and is even used for weddings. Some caves, such as Ellenville Fault Ice Caves, are formed by the fallen debris from the surrounding fault. Some caves are manmade, like the Lockport Caves, but are no less fascinating and attractive.


1.Cave of the Winds 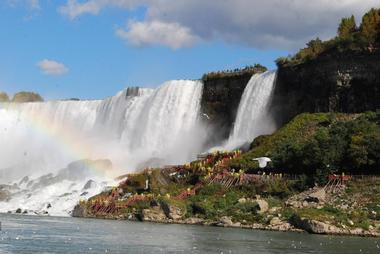 The Cave of the Winds used to be a cave in the rock behind Bridal Veil Falls at the Niagara Falls. The cave, 130 feet high, 100 feet wide, and 30 feet deep, was closed after a massive rock fall. A visit to the cave had been a popular tourist attraction since 1841. After the closure, it continued from 1924 in a different form, bringing visitors to the spot close to where the cave existed, as close to the waterfalls as anyone can get. The visitors come via an elevator from the area roughly between the American and Canadian Falls, descending down to the Niagara River level at the very base of the American Falls. They walk along a series of wooden decks and platforms until they reach the base of the Bridal Veil Falls, close to where the original Cave of the Wind was. It is quite an experience with the water falling all around them, ending under the decking, and is not for the faint of heart.

Clarksville Cave is a 4,800-foot-long horizontal cave system in Clarksville, New York, with three main entrances. The cave is popular but is not for average tourists. The most popular entrance is the Gregory entrance, which is very narrow, in fact it is just a hole in the ground. While the cave tunnels go fairly straight, they are not easy to explore. The low ceiling means banging your head is a possibility if you are not careful. The corridors can get fairly narrow, so visitors often have to squeeze through. It quickly gets quite cold as well as muddy and wet, as the tunnel runs along an underground river. The visitors are provided with helmets and lights for safety. The river and underground pools are attractive to adventurous cave divers, with proper scuba equipment.

The Ellenville Fault Ice Caves are located in the 4,600-acre Sam's Point Preserve on the 2,289-foot-high Shawangunk Ridge in New York. It is the largest open fault in the States, with a series of ice caves that were formed from fault’s falling debris. The caves are up to 100 feet deep fissures in the quartz rock, with a very cold microclimate that supports several northern species such as black spruce, mountain ash, hemlock, and dwarf pitch pine. There are several hiking trails leading to Sam’s Point and the ice caves. The trail, steep in places, leads down the caves, winding around large boulders, with ice trapped in places. There are bridges, wooden steps, and ladders in parts of the caves. The trail continues up stone steps, under low exposed rock outcroppings, and by high, scenic cliffs before coming back to the surface.

Howe Caverns, located in the town of Howes Cave, lie 156 feet underground and are composed of two types of limestone deposited hundreds of millions of years ago. The cavern contains a lake named the Lake of Venus and features many speleothems. The 2-hour Signature Rock Discovery Tour mimics real cave exploration. The guides take visitors to a section of the cave not previously open to the public. There is no electricity and no light. It is very cold and muddy. Another expanded tour passes by the remains of the original tourist boat, points out the signatures written on the rock by the early explorers over 100 years ago, and enters a cave named Music Hall, which has great acoustics. The tour ends at the Lake of Mystery, where the visitors have to crawl through a low water-logged passage. The caverns have a cave with a heart-like formation that is a popular spot to hold weddings.


Lockport Cave is a man-made hydraulic raceway built between 1858 and 1900 to supply water from the Erie Canal to local businesses. It is located in Lockport, New York, on the Erie Canal, not far from Niagara Falls. The cave is the site of the popular tourist attraction, the Lockport Cave and Underground Boat Ride. The tour starts with a walk through the water tunnel blasted from the solid rock, passing stalactites, interesting geological formations, and objects left behind by the men who constructed the tunnel in the 1800s. The tour continues with an underground boat ride that takes almost 70 minutes, about 40 feet underground, with very little light, creating a spooky, wet, and muddy atmosphere.


Natural Stone Bridge and Caves is a tourist attraction in the Adirondack mountains in upstate New York, close to Lake George. The pretty, scenic riverside area contains a huge stone bridge or arch and a massive ¾ mile wide marble cave entrance. The cave is located mostly above ground and has natural stone steps and a trail. The cave contains some of the oldest marble in North America in the caves, which were formed during the last ice age. The cave contains interesting marble features such as grottos, portholes, a gorge, and a waterfall. This geological wonder is a popular location for earth science classes.

The Tory Cave is a small, shallow limestone cave close to the top of the Helderberg Escarpment. It is part of the popular Thacher State Park near Albany, New York. There is a story linked to the cave and its name about Jacob Salsbury, a loyalist, or Tory as they were called, who was a spy and reported on the movement of rebel troops to the British during the American Revolution. He spent some time hiding in the cave, which must have been very uncomfortable because the cave offers very little shelter. It does contain ice stalagmites in the spring, what is rare in the local caves. The cave is off limits to tourists.