5 of the Largest Cities in North Carolina 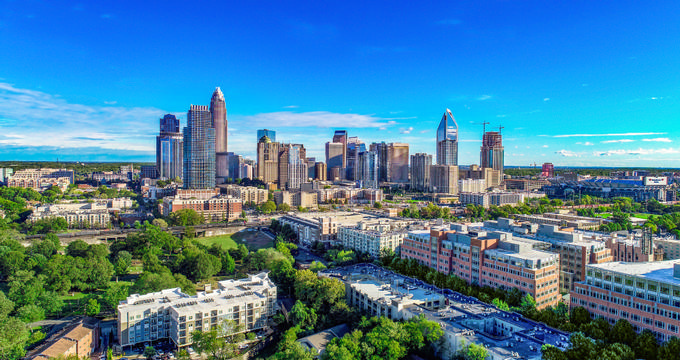 North Carolina is the 28th largest and 9th most populous of the United States. It is situated along the eastern coast, having borders with South Carolina, Georgia, Tennessee, and Virginia. Nicknamed the 'Old North State' and 'Tar Heel State', North Carolina has a large variety of landscapes, including coastal plains to the east and mountainous area to the west. The state covers an area of 53,819 square miles and is made up of 100 counties. 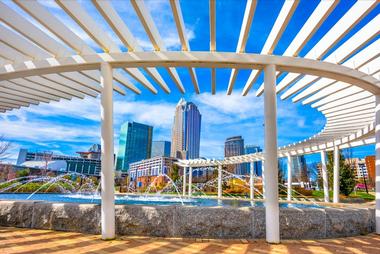 Located in Mecklenburg County in the south-central part of North Carolina, Charlotte is the state's most populous city. It's also the 17th most populous city in the entire United States. Charlotte has an estimated population of around 859,000 people, with 2.4 million living in the surrounding metropolitan area.

The Greater Charlotte metropolitan area is the 22nd largest in the United States. As the largest city in North Carolina, Charlotte covers an area of 305.4 square miles. It is nicknamed 'Queen City' or 'QC' due to the fact that it was named after a German Princess named Charlotte of Mecklenburg-Strelitz, who later become Queen Consort of Great Britain. The city is well-known for being home to successful sporting teams and being one of the biggest banking centers in the nation. 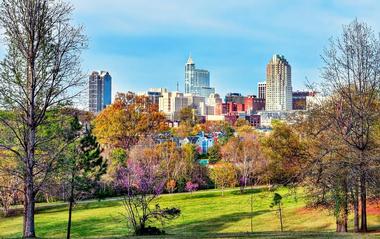 Raleigh is the capital city of North Carolina and is situated in Wake County, in the central part of the state. Raleigh has an estimated population of around 464,000 people, with over 1.3 million living in the surrounding metropolitan area. This large North Carolina city covers an area of 144.8 square miles.

Raleigh has earned the nickname 'City of Oaks' due to the fact that hundreds of oak trees can be found all around the city, and it was named after Sir Walter Raleigh, the English writer and explorer. The city is home to the famous Research Triangle Park, which is the biggest research park on the planet, along with North Carolina State University. Statistically, Raleigh is one of the fastest growing cities in all of the United States. 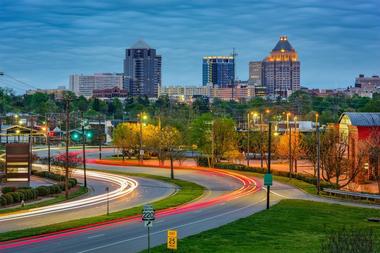 Situated in Guilford County in the Piedmont region, which is in the central part of North Carolina, Greensboro is the third largest city in the state. Greensboro has an estimated population of around 287,000 people, with over 720,000 living in the surrounding metropolitan area. This city was established back in 1808 and has grown over the years to cover an area of 131.8 square miles.

Greensboro is nicknamed 'Tournament Town' due to the fact that it hosts a large amount of sporting tournaments each year, particularly at the Greensboro Coliseum Complex. It is also known as 'Gate City' due to its status as a key transportation hub. The city's name was originally spelled Greensborough and was named after Major General Nathanael Greene, an officer in the American Revolutionary War.

, OH -- You are reading "5 of the Largest Cities in North Carolina" Back to Top 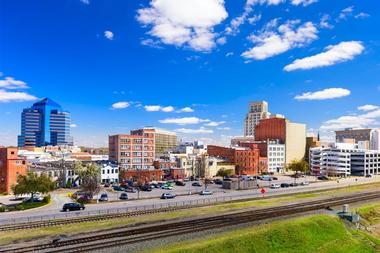 Located in Durham County in the northern central part of North Carolina, Durham is the fourth largest city in the state. This city has an estimated population of around 263,000 people, with over 540,000 living in the surrounding metropolitan area. Durham covers an area of 108.3 square miles and was named after Bartlett S. Durham, an American doctor and entrepreneur who donated the land on which the city was built. 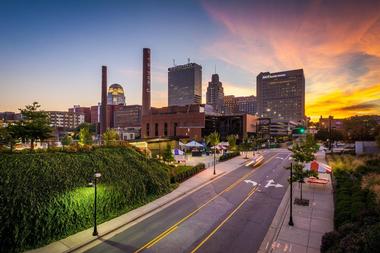 
Situated in Forsyth County in the northern central part of the state, Winston-Salem is the fifth biggest city in North Carolina. This city has an estimated population of 242,000 people, with over 667,000 in the surrounding metropolitan area.

As the name suggests, Winston-Salem was formed by the conjunction of two towns. Salem was founded first, in 1753, and a northern section of the town's land was eventually sold off in the mid-1800s and made into a new town called Winston. Since the two towns were so closely connected, people began referring to the area as Winston-Salem. The city is classed as a great place to retire and ranks high for quality of life.

5 of the Largest Cities in North Carolina

Reynolda House Museum of American Art is a small museum that features one of the country's finest collections of American paintings that dates back to the colonial period. Established in 1917 by the founders of the Reynolds Tobacco Company, Katharine and R.J. Reynolds, the house which the museum currently occupies was set in the center of a 1,000-acre estate in the Reynolda Historic District in Winston-Salem, and was opened to the public in 1967.

Designed by renowned architect of the time, Charles Barton Keen, Reynolda House was completed in 1917 by Katharine and R.J. Reynolds and was the home of two generations of Reynolds to follow. Remaining in the family for over 50 years, Reynolda House was established as an institution dedicated to the arts and education in 1965 and opened to the public in 1967.

Located on Reynolda Road in the heart of the Reynolda Historic District in Winston-Salem, the Reynolda Estate features the main house and museum and a village consisting of 28 of the original 30 buildings that occupied the estate grounds, which are now occupied by boutiques, shops, and restaurants. The property is also home to beautifully restored formal gardens filled with weeping cherry trees and Japanese cryptomeria, and a tranquil 16-acre lake known ‘Lake Katharine’ which has been converted to lush wetlands that provide a home for a diverse array of wildlife.

Traveling exhibitions are held in a modern gallery space in the Mary and Charlie Babcock Wing twice a year, and other exhibits are displayed in the Northeast and West Bedrooms in the house throughout the year. Exhibitions include ‘Grant Wood and the American Farm,' ‘Reynolda at 100: Reynolda Farm’, ‘Off the Wall: Postmodernism Art at Reynolda.’

Reynolda House is an institution with education at its core and offers a variety of educational programs, lectures, workshops and classes for learners of all ages, from first-time visitors to advanced scholars. Aimed to make meaningful connections with the Museum collections, adults programs include American Arts Discovery, Portals of Discovery, Volunteer Programs, Research the Collections, and Guided Tours. Programs designed for families and children include K-12 Field Trips, Visiting with Children, Reynolda Sketch, Summer Adventures, Family First Day Workshops, and Community Days.

Reynolda House is located at 2250 Reynolda Road in Winston-Salem. The Museum offers a wealth of behind-the-scenes docent-led tours throughout the year for all ages and group sizes. Tours range from exploring the historic main house to delving into the original farm buildings in Reynolda Village and are approximately 90 minutes long.

Reynolda House offers a variety of exclusive packages for visitors to enjoy all that the Museum and Estate have to offer, including overnight and holiday packages.

The Brookstown Inn package explores the 1837 historic Brookstown Inn and includes one night stay at the Historic Brookstown Inn, two adult admission tickets to Old Salem Museums & Gardens including the Gardens of Old Salem, the Museum of Early Southern Decorative Arts (MESDA) and the Gardens of Old Salem, and two general admission tickets to Reynolda House Museum of American Art, including access to Reynolda Gardens of Wake Forest University. The package also includes a welcome gift, a complimentary hot Southern breakfast daily, cheese and wine receptions in the evening with live jazz in the Parlor, and freshly baked cookies and milk at bedtime. The Hawthorne Inn Package includes overnight accommodations for two adults, a complimentary gourmet breakfast, free parking and complimentary wireless Internet.

Back to: Best Things to Do in Winston-Salem

Where to Stay in Asheville - 25 Best Romantic Getaways