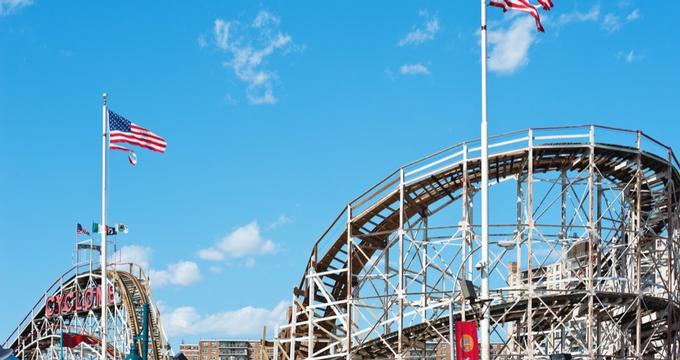 Known as the 'Playground of the World', Coney Island has held a special place in the hearts of many people through several generations, dating all the way back to its establishment as one of America's favorite seaside resorts back in the mid-19th century.

By the end of the 19th century, the Brooklyn neighborhood's distinctive amusement parks had started to open up, with the attractions drawing in countless visitors from far and wide through the early 20th century.

In the wake of World War II, Coney Island's popularity started to decline a little, but the area has seen a real resurgence in recent years, especially with the opening of MCU Park and a whole range of new amusements and rides.

Clearly, Coney Island has a fascinating past, with a lot of interesting stories to tell and many community members and key figures worthy of note and remembrance. The Coney Island History Project works to tell their stories and preserve the neighborhood’s history.

The Coney Island History Project is a 501 (c) (e) not for profit organization that works to preserve the past of Coney Island, honoring the people and stories who made the place what it is today and helped it earn such iconic status over the years.

This organization was founded back in 2004 and works through a range of programming and initiatives include recording and archiving oral history, offering access to historical artifacts through various educational exhibits, providing walking tours of Coney Island, and organizing various events as well.

- Hall of Fame - The Coney Island History Project all began in 2005 with the opening of the Coney Island Hall of Fame, and this is still a big part of the project's work to this day. When we look back into the past, it's fascinating and inspiring to see and learn more about the various visionaries, pioneers, inventors, and leaders who helped to make Coney Island what it is today. People like Granville T. Woods, who helped to invent the electric roller coasters that made Coney Island so popular with families, or Paul Boyton, who constructed Coney's first ever amusement park, are all honored in the Hall of Fame. It's one of the most interesting spots in Coney Island, decorated with colorful banners and interesting information panels.

- Oral History Archive and Coney Island Collection - Additional major parts of the programming and work being done by the Coney Island History Project can be seen in the organization's collections and oral history archive. The collectino is filled with photographs, artifacts, documents, and other historical materials, all sourced, collected, archived, and protected under the car of the project. A range of maps, architectural renderings, black and white photos, color photos, books, and more are kept safe by the project, which also boasts an extensive oral history archive, recording interviews with various members of the Coney Island community and others around Southern Brooklyn.

- Exhibition Center - The many artifacts, photos, and other materials of the Coney Island History Project are on display at the project's Exhibition Center, which is located at West 12th St, right by the entrance to Deno's Wonder Wheel Park, just off the Boardwalk. The center opened up in 2007 and has been offering free admission ever since, with visitors able to see and enjoy the various exhibits, displays, and special events without paying a single dime. You can see some of Coney Island's oldest surviving artifacts, including a Toll House sign from 1823, as well as taking a photo with Coney Island's only remaining original Steeplechase horse.

The Coney Island History Project is doing wonderful work to preserve and cherish the history of one of America's favorite playgrounds, and you can show your support by taking a walking tour, visiting the exhibition center, or even becoming a member. All members get exclusive benefits like free T-shirts, early registration for special events, exclusive invites, a signed copy of Charles Denson's book, and more. website