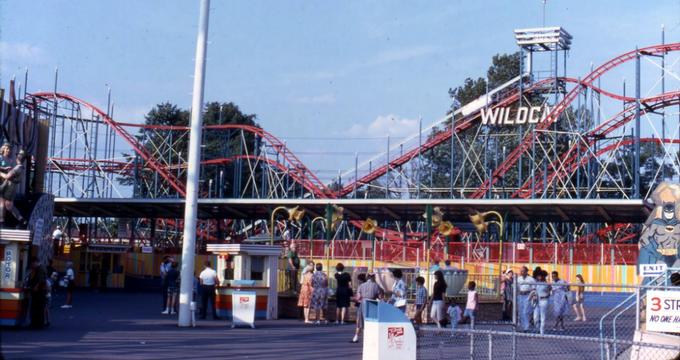 Located in Cliffside Park, New Jersey, Palisades Amusement Park was a historic American amusement park in operation from 1898 through 1971, preserved today with a public park memorial and special event lecture series. Palisades Amusement Park, NJ was opened in 1898 by the Bergen County Traction Company as a trolley park offering evening and weekend entertainment rides, originally referred to as the “Park on the Palisades.”

The park operated on a 30-acre site atop the New Jersey Palisades in the cities of Cliffside Park and Fort Lee, overlooking the Hudson River and the northern end of Manhattan. In 1903, the park was sold to August Neumann and Frank Knox, who added a variety of amusement attractions, including a Ferris wheel and a baby parade. In 1908, the park was rebranded as Palisades Amusement Park, and in 1910, it was purchased by Nicholas and Joseph Schenck, who added a large number of amusement attractions throughout the following decades, including a saltwater swimming pool pumped with water from the Hudson River, the largest in the nation of its kind.

The park’s reputation as a major entertainment destination in the New York City region grew throughout the mid-20th century following its purchase by former Coney Island concessionaires Jack and Irving Rosenthal in 1934. Though the park was plagued by several fires in the 1930s and 1940s, it became one of the most popular youth tourist attractions in the New York-New Jersey region throughout the mid-20th century, in part due to a saturation advertising campaign in comic books and a popular music pavilion rock-and-roll series. Throughout the 1950s and 1960s, the park was brought to national attention because of its racial segregation policies and police brutality cases and was the subject of a popular 1962 rock song by Chuck Barris and Freddy Cannon. As a result of its increased visibility, park attendance surged throughout the 1960s, with peak attendance in 1969 reaching more than 10 million annual visitors.

During the late 1960s, the park created local controversy due to the high-congestion traffic it created, the lack of adequate parking facilities to accommodate its high visitorship, and a number of high-profile ride accidents and deaths due to ride disrepair. Following action by local community groups, pressure to rezone the amusement park site for high-rise housing led to the park’s sale in 1971 to Texas real estate developer Winston-Centex Corporation. The park officially closed to the public on September 12, 1971, and despite attempts to reopen park attractions in following years, remained closed for operations, with rides dismantled and sold to other parks throughout North America.

Due to its sudden closing at the height of its popularity, the amusement park remains an iconic part of American pop culture today, memorialized in a number of film and television programs and popular songs and jingles. Though four high-rise luxury apartment buildings were constructed on the site of the park throughout the 1970s and all former rides were dismantled and sold to other amusement parks throughout North America, a memorial park commemorating the park’s legacy was installed at the site of the former park in 1998 by Winston Towers’ management, commemorating the park’s legacy in American popular culture. The memorial park, entitled “the Little Park of Memories,” is open to the public as a museum exhibit, with names of the park’s rides engraved on bricks throughout the memorial. In 2014, five original cars from the park’s Cyclone roller coaster were also returned to the region and are part of a planned restoration project which will display them publicly as a historical exhibit.

Though no physical museum site is operated other than the public memorial park, the Palisades Amusement Park Historical Society nonprofit organization offers a variety of public programming connected to the history and legacy of the park, including a weekly public lecture series held at libraries and community organizations throughout the greater New York City region. 90-minute presentations regarding the amusement park’s history, demise, and legacy are available for booking at community and private events, presented by members of the Historical Society. A companion multimedia PowerPoint presentation showcases photographs and videos related to the park’s history, including ride operations and former employee and visitor testimonials. A complete archive of materials related to the park’s history is also available on the Historical Society’s website, including multimedia galleries of video and audio connected to the park’s history and an employee memories archive. A number of educational and historical items are sold on the website’s gift shop and bookstore, including limited-edition historic prints and photographs connected to the park. Several publications are also available, detailing the park’s legacy in popular culture and rock music history.

More Things to Do in NJ

16 Best Things to Do in Trenton, New Jersey

5 Best Things to Do in Avalon, New Jersey