Best Things to Do in Louisiana: Houmas House Plantation and Gardens 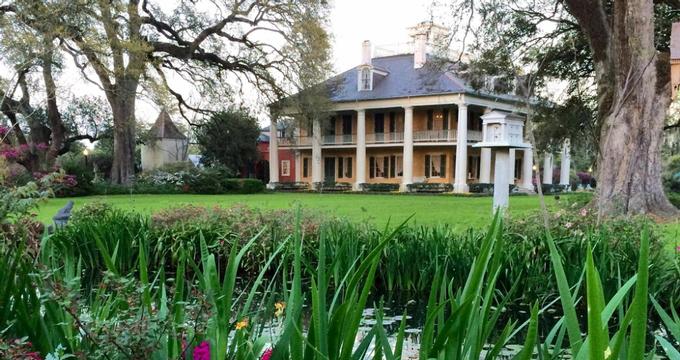 Houmas House is a historic plantation located between New Orleans and Baton Rouge, Louisiana, on the banks of the Mississippi River. The plantation offers an inn and restaurant, beautiful gardens, and guided tours of the main home. The 38-acre site provides guests with a look at what life was like for a wealthy sugar baron of the 1800s. The 1840s mansion has a columned Greek revival exterior topped by a raised turret offering 360-degree views of the surrounding land and river. The home includes twin garconierre, small apartments historically used by teenage boys who would visit the home to court the daughters of the house. The garconierre are a unique feature, not common to plantation homes, and distinguish the exterior of the mansion.

The look of the mansion was “Federalized” in the 1940s, whereby most of the ornate interior and exterior features were removed and indoor plumbing was added. Renovations in the early 2000s have restored much of the original detail to the home. Tours of the mansion teach visitors about the culture of antebellum Louisiana, and point out the home’s antique furnishings and original artwork.

Tours of the landscaped gardens are self-guided. Walking trails and places to sit are located throughout the 38 acres, and the gardens offer a combination of exotic and Louisiana species, with plantings that are renewed each season. Each garden courtyard offers a unique water feature including koi ponds, lily pads, and lotus plants. Three on-site restaurants offer breakfast, lunch, and dinner in fine dining or casual settings. The fine dining rooms echo the glory of the mansion’s 1840s décor, and serve meals on replicas of the sugar baron’s fine china. An inn on the property consists of six small bed and breakfast cottages, designed to mimic an historical structure originally located down the street from the plantation.

The Houmas House Plantation and Gardens are named for the Houmas Native Americans, the original residents of the property. In the 1700s, the Houmas sold their land grant to Alexander Latil and Maurice Conway. Latil built a French provincial home on the land, which is still there today, located behind the mansion. By 1803, the site was in full operation as a sugar-producing plantation. In 1810, the site was sold to General Wade Hamption, a revolutionary war hero, who soon after the purchase began construction on the mansion. Construction was not fully complete, however, until 1828, three years after the general’s daughter, Caroline, and her husband Colonel John Preston had taken over the property. This followed the custom of the time to gradually increase the size and splendor of one’s home over several years. During this time, the sugar plantation was growing, and the Houmas Plantation had increased in size to over 300,000 acres.

After being sold to Irishman John Burnside in 1857, the plantation continued to grow and was soon the largest producer of sugar in the United States. Burnside saved the home from destruction and occupation by Union forces during the Civil War, by claiming that his Irish citizenship offered him immunity. Burnside’s successor, Colonel William Porcher Miles, continued to expand the plantation, which was producing over 20 million pounds of sugar annually, up until the Mississippi River’s “great flood” of 1927. With the Depression to follow soon after, the plantation fell into disrepair. In the 1940s, it was purchased and revived by Dr. George B. Crozat, whose family opened the home for public tours in 1963. Since 2003, the property has been owned by Kevin Kelly, who has restored it to its full glory, highlighting the best of each period in its rich history.USA Today has voted the Houmas House the “Best Historic Mansion” in the United States.

Tours of the property are available in English and French. Guests staying in New Orleans may opt for a tour that includes transportation from the city. The five and a half hour roundtrip excursion includes a luxury bus ride, during which a film is shown describing the site’s history. The tour also includes a guided tour of the home and self-guided tour of the gardens. For guests arriving of their own accord, tours of the home depart every half hour. Special tours are offered throughout the year, one of the most popular being October’s ghost tour, which recounts tales of the staff and guests’ interactions with the well-known ghosts on the property. The plantation and surrounding gardens may be rented for weddings, events, and meetings.

More Things to Do in Louisiana