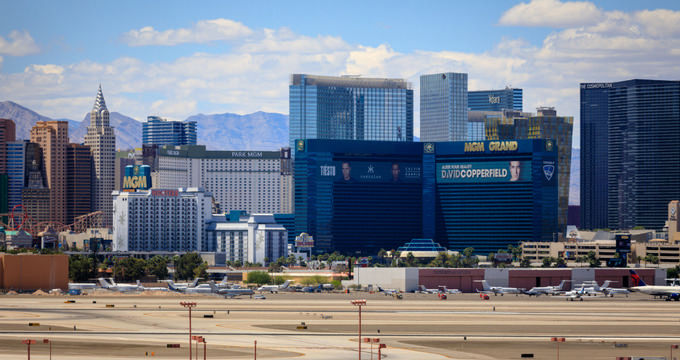 In the center of the state of Nevada, deep in the Mojave Desert, sits one of the most well-known cities on the face of the Earth. Las Vegas, also known under a myriad of other names like Sin City, The Entertainment Capital of the World, and America's Playground, is globally famous for its flashy hotels, incredible casinos, thriving nightlife, and remarkable surrounding landscape. It's one of the most populated cities in the United States and is by far the biggest city in the state of Nevada, being the county seat of Clark County and playing home to around 650,000 people, with more than 2 million living in the greater metropolitan area. Hours/availability may have changed.

Las Vegas is the cultural and commercial heart of the state of Nevada and was settled back in 1905, before being incorporated just a few years later in 1911. Before all of that, a Mexican explorer named Antonio Armijo led a scouting party through the area and named it Las Vegas, which translates to 'the meadows' in English. For many years, Las Vegas was just a small and simple settlement, but in 1931, when the state of Nevada decided to legalize gambling, the city started to boom.

In the wake of World War II, many hotels and casinos started to spring up in Vegas and it developed a reputation for bright lights and exciting entertainment of all kinds. As years went by, Las Vegas grew along with its reputation, with even fancier and flashier hotels being added to the famous 'Strip' and surrounding streets. Nowadays, it’s the premier destination in the United States for gambling and is one of the most visited cities in the nation.

The elevation of a city tells us how high it is above sea level. The city of Las Vegas has an elevation of 2,001 feet (610 m), which is relatively high when compared to many other locations around the United States, especially coastal states, but is quite low when compared to the state average elevation for Nevada. The mean elevation of Nevada is actually 5,500 feet (1,520 m), making it the fifth highest state on average. Anyone in Las Vegas who wants to get higher can visit the city's tallest building, the Stratosphere Tower, which measures up at 1,149 feet (350 m) and is the tallest observation tower in the United States, as well as being a hotel with casinos and various attractions.

When compared to the average elevation in the state of Nevada, Las Vegas is relatively low, but Sin City is surrounded by mountain ranges in all sides, with many peaks in the nearby area reaching elevations of 10,000 feet (3,000 m) or more. Mount Charleston is one of the highest points in the Las Vegas area and has an elevation of 11,916 feet (3,632 m), for example, and several other high mountains can be found and climbed nearby.

You are reading "Las Vegas Elevation" Back to Top

3.Climate and Things to Do in Las Vegas 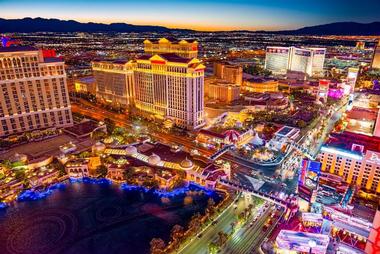 The city of Las Vegas has a subtropical hot desert climate and is well-known for having quite warm weather for much of the year, with very low amounts of precipitation. Nevada in general is one of the driest states in America, and the city of Las Vegas only gets a few inches of rainfall per year. Humidity levels tend to be quite low in this city and the summers tend to last very long, with very hot days through the months of May, June, July, August, and September.

Las Vegas is well known for all kinds of adult entertainment. There are many different hotels and casinos to explore all around the city, including world-famous locations like Luxor, Caesar’s Palace, The Mirage, and The Bellagio. Games of chance of all kinds can be enjoyed in this city, from blackjack to roulette, and many locations also have live shows and entertainment of all kinds featuring musicians, comedians, magicians, circus performers, and more.

You are reading "Las Vegas Elevation" Back to Top

If you think that watching the choreographed routines and stage performances is all there is to Vegas, think again. You’d be surprised to know that watching the fountains of Bellagio “perform” is just as iconic as all the other world-class presentations and attractions. In fact, this is hailed as one of the most popular attractions in the city, because not only are they free, these spectacular waters even dance to the tune of over 30 different songs.

Yes, you read that right – the waters of the fountain literally dance to whatever song is playing. That’s over 1,200 jets of illuminated water that can spurt up to 460 feet into the air. The streams of water twirl, spin, and shimmy with perfect timing in order to create a beautiful display of waterworks, leaving the audience in awe.

Countless people come to Vegas just to witness this attraction. In fact, the 8.5-acre lake starts performing as early as noon and lasts until midnight, every day. Keep in mind the schedule below so you can catch these performances on time:

Considering the frequency and complexity of the show, you can tell that the attraction has to be well maintained. In fact, it’s managed by a staff of 30 members who clean, maintain, and repair the fountains 7 days a week, all year round!

The fountains are literally a huge attraction. Measuring 375,000 square feet, the attraction is as big as eight football fields and can contain enough water to fill up 2,000 swimming pools. If you were to take your typical garden hose and start filling up the fountains, it would take over a year to finish!

There are exactly 1,214 devices that simultaneously shoot streams of water at any given time. The water can be shot up higher than a 24-story building. And these aren’t just little streams of water – 17,000 gallons of water are being shot up in the air.

Over the years, the performances have just gotten better. Bellagio has now added EDM shows, featuring the works of powerhouse DJ Tiesto, to the entire mix. Of course, the playlist also includes timeless classics like songs by Frank Sinatra, Michael Jackson, the Beatles, and Elvis Presley.

So, if you’re going to the Bellagio, make sure you don’t miss out on this amazing attraction. Getting there is easy, as there usually isn’t much traffic, but even if there is, it’s definitely worth the trip. In fact, you’d probably want to stick around watching the fountains perform all day.

You are reading "Las Vegas Elevation " Back to Top

20 Best Things to Do in Las Vegas