12 of the Most Beautiful Kentucky Waterfalls 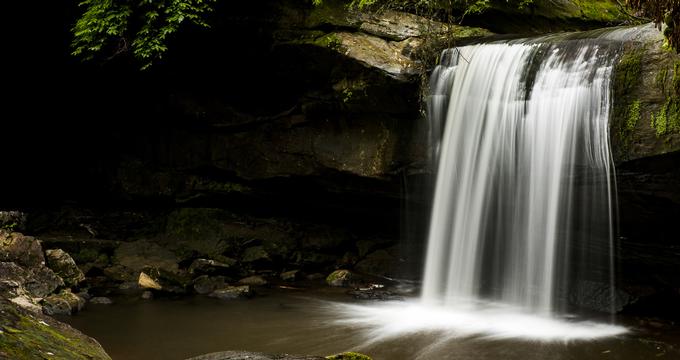 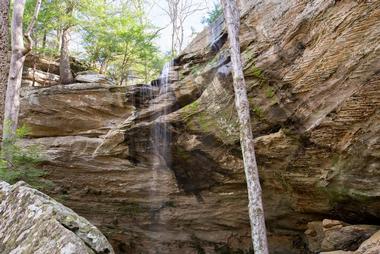 Located in the John B. Stephenson Memorial Forest State Nature Preserve in Rockcastle County, near Berea, Anglin Falls is a pretty 75-foot cascade fed by Anglin Creek that is best experienced after a good rainfall. Surrounded by beautiful landscapes filled with wildflowers, Anglin Falls can be reached on an easy 0.7-mile trail with a slight incline that is located just a few miles from Berea. The path boasts spectacular views of Anglin Falls along the way, and once at the falls, there are beautiful cliff lines and natural scenery to enjoy. Anglin Falls is open year round, however, tend to dry up in the summer months so are best viewed in the spring after the winter snow melts. 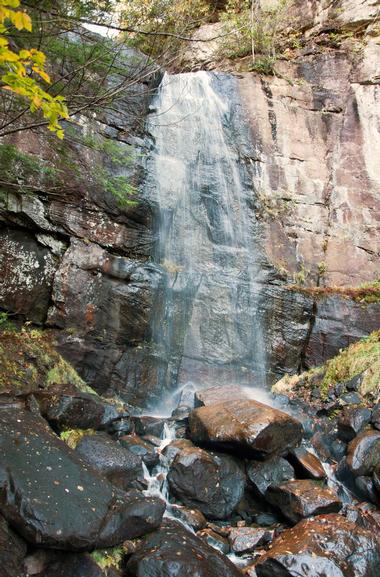 Bad Branch Falls is set within the Bad Branch Falls State Nature Preserve in Letcher County, Kentucky. The 2,639-acre nature preserve is home to the 60-foot Bad Branch Falls, which is nestled in a stunning forested gorge on the south face of Pine Mountain in the heart of the preserve and cascades over sandstone cliffs to create a beautiful natural scene. The falls can be reached by hiking on a trail that follows the stream until the falls, surrounded by verdant forests and woods filled with mountain laurel and hemlocks. The hiking trail is of average difficulty with several strenuous elevations and rocks to scramble over and takes about 2 hours in total. 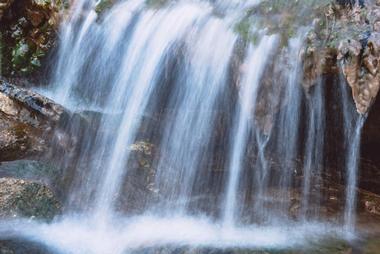 Located in the Daniel Boone National Forest between Wellington and Ezel in Menifee County, Broke Leg Falls features several waterfalls running through a scenic canyon that can be reached by a 0.3-mile moderately trafficked out and back trail. The 60-foot cascade is set in a canyon with clear tornado evidence, such as the debris of several small trees from the destruction caused by the 2012 F-3 tornado that hit the area. Despite this, however, the hike to the waterfalls and the falls themselves are worth a visit, offering a beautiful off-the-beaten-path adventure to enjoy on a sunny day. Broke Leg Falls tend to dry up in the summer months, so are best visited after a good rainfall or post-spring melts. 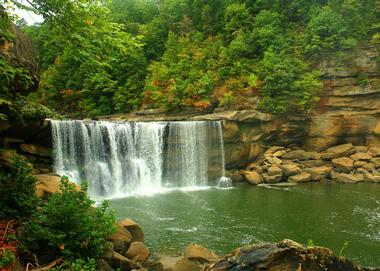 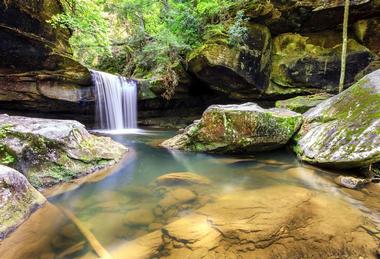 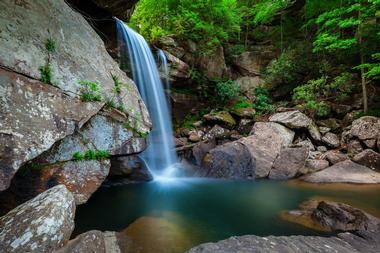 
Eagle Falls is a 44-foot waterfall fed by Eagle Creek in Cumberland Falls State Resort Park. The short, lightly flowing waterfall is set downstream of Cumberland Falls and flows into the Cumberland River. The cascade is located within a beautiful gorge and can be reached on a 3-mile round trip (1.5 miles each way) on Trail 9, which features several hills and inclines, overhanging rocks and boulders to scramble, and beautiful scenery along the way, including spectacular views of Cumberland Falls. Cumberland Falls State Resort Park also offers comfortable overnight lodging, a campground with 50 campsites with utilities, a restaurant with beautiful river views, a modern visitors center and an array of activities, including hiking, mountain biking, horseback riding, and whitewater rafting on the Cumberland River. 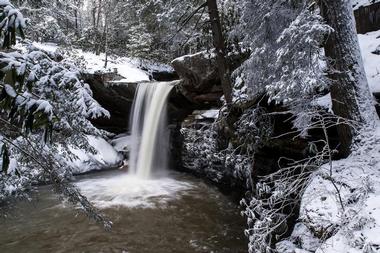 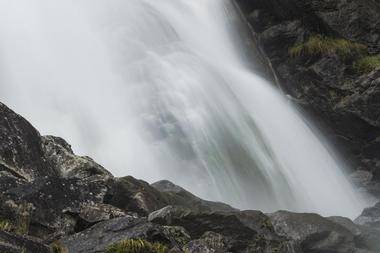 Seventy Six Falls is a plunging 90-foot waterfall set on Lake Cumberland in Albany, Clinton County. Believed to either have been named for the nearby community of Seventy Six or the number of breaks, or small falls, on Indian Creek, Seventy Six Falls is surrounded by a park maintained by the U.S. Army Corps of Engineers. A picnic area with tables, benches, and a blue-roofed shelter can be found at the point where Indian Creek drops approximately 40 feet into Lake Cumberland, creating the Seventy Six Falls. Unobstructed side-views of the falls can be enjoyed by following a path from the picnic area, behind a stone wall and down a narrow trail to the lake shore where beautiful views of the cascading waterfall can be seen. 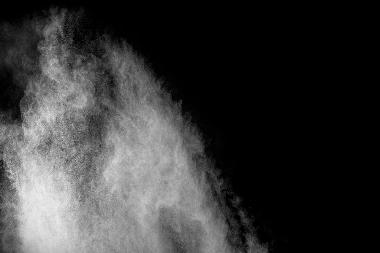 Star Creek Falls is a 50 to 60-foot-high multi-tiered waterfall located in the beautiful Daniel Boone National Forest in Whitley County. The falls can be reached by hiking for about 2 miles along the Sheltowee Trace via Dog Slaughter Trail #414. The Sheltowee Trace is also known as the Moonbow Trail, which runs parallels to the Cumberland River and features several key attractions and interesting rock formations en route, including Godzilla Rock, which is the size of a mansion and boasts an enormous body and elongated neck that stretches out over the trail, resembling a giant lizard towering overhead. Another unusual rock formation worth seeing along the way is Star Creek Arch, which is formed by a massive boulder wedged precariously between two natural stone abutments that have likely stood for centuries. 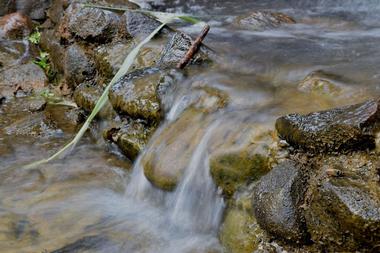 Located in West Point in Hardin County north of Fort Knox and close to Louisville, Tioga Falls is a 130-foot scenic waterfall fed by Tioga Creek and is best after in the spring or after a good rain. The falls are set on land belonging to the United States Army and are sometimes off-limits due to military exercises. Tioga Falls features several drops separated by short sections of the creek, the highest of which is 30 feet tall, while the uppermost a twin fall and can be reached by following a hiking trail for about a mile. 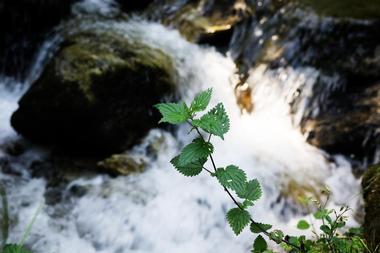 Located the Middle Fork of the Red River next to the Red River Gorge Geologic Area in the magnificent Red River Gorge area, Torrent Falls is a 165-foot waterfall that is one of the tallest in the state along with Yahoo Falls. Set within Natural Bridge State Resort Park in Powell and Wolfe Counties, the falls are surrounded by the Daniel Boone National Forest and part of the Torrent Falls Resort, which also offers a variety of outdoor activities such as hiking, mountain biking, climbing, and birdwatching. 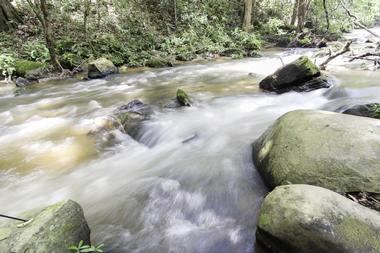 Located in the Big South Fork National Recreation Area in McCreary County, Kentucky, Yahoo Falls is a 113-foot waterfall and the tallest waterfall in the state. Also known as Ywahoo Falls, the seasonal waterfall has a light flow with just a trickle in summer and is best seen after a significant rainfall. Yahoo Falls can be viewed from a scenic trail that winds from the highway along the Red River Gorge to the falls, passing some interesting sights such as the Yahoo Arch, which can be reached by an out and back spur path, adding another 1.6-mile round trip to the existing hike to view Yahoo Falls.

12 of the Most Beautiful Kentucky Waterfalls

13 Best Things to Do in Paducah, KY

25 Best Things to Do in Lexington (Kentucky)

25 Best Places to Visit in Kentucky

25 Best Things to Do in Charlotte (North Carolina)