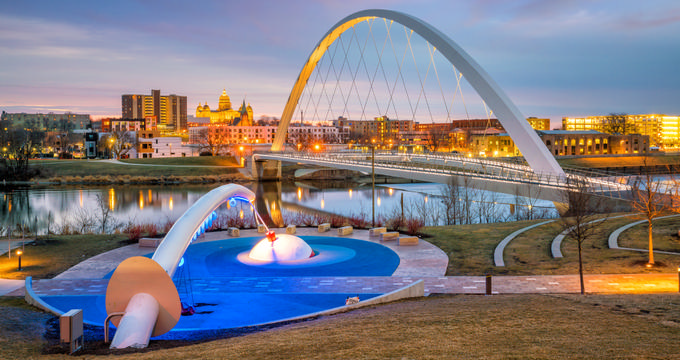 Situated in the Midwest region of the United States, Iowa is the 26th largest state in terms of land area. It has borders with six other states: Wisconsin, Missouri, Illinois, Nebraska, Minnesota, and South Dakota. Iowa has a rich history, having been under the control of both Spain and France until the Louisiana Purchase. Nicknamed the Hawkeye State, Iowa covers an area of 56,272.81 square miles and has an estimated population of 3.1 million, giving it the 30th highest state population.

Iowa's economy was strongly dependent on agriculture in the early days of European settlement, but has grown and developed over the years to include finance, manufacture, technology, and renewable energy. Iowa is regarded as one of the safest states in which to live, with a relatively low crime rate. The capital city of Iowa is Des Moines, which is also its largest city. The Greater Des Moines area is the biggest metropolitan area in Iowa. Here are some details and statistics for the largest cities in Iowa. 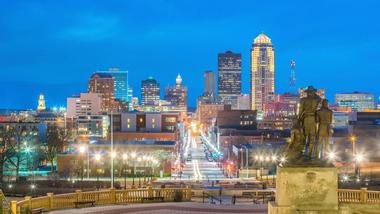 Situated in Polk County, with a small section extending into Warren County, Des Moines is the capital and largest city in the state of Iowa. The city is located on the Des Moines River and was named after this river, with 'Des Moines' translating from French into 'The Monks' in English. The city of Des Moines is located in the south-central part of Iowa and covers an area of 90.65 square miles.

Des Moines has an estimated population of 217,000 people, with over 645,000 living in the surrounding metropolitan area. The city is a major industrial center for the state of Iowa, with key businesses in Des Moines being focused on insurance, financial services, and publishing. Des Moines is regarded as a national leader in the insurance field and is classed as one of the best cities in the United States to set up a new business. 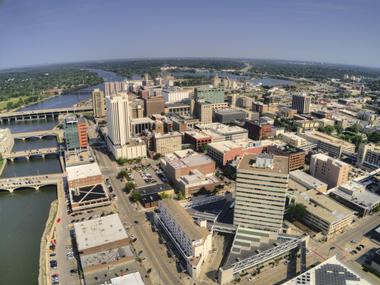 Situated in Linn County in the central eastern part of the state, Cedar Rapids is the second biggest city in Iowa. It covers an area of 72.07 square miles and has an estimated population of 132,000 people, with around 257,000 living in the surrounding metropolitan area.

Cedar Rapids was established in 1838 and originally named Columbus, like several other cities around the nation, but had its name changed to Cedar Rapids in 1841 due to the rapids seen in the nearby Cedar River, which was named after the multitude of cedar trees on either side of it. A major art and culture city, Cedar Rapids is home to many museums and art centers. 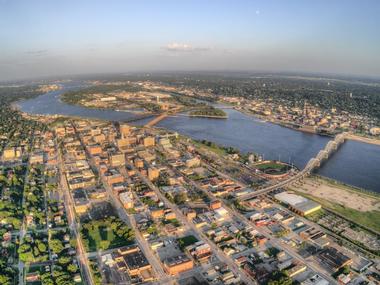 Located in Scott County in the eastern section of the state, Davenport is the third biggest city in Iowa. It is situated on the Mississippi River and is part of the 'Quad Cities' metropolitan area, which also includes Bettendorf in Iowa, along with the Illinois cities of Moline, Rock Island, and East Moline.

Davenport is the biggest city in the Quad Cities region and covers an area of 65.08 square miles. It has an estimated population of 102,000 people. Davenport is regarded as a key transport city due to its equidistant location between Des Moines and Chicago. This city is also known for its educational institutions. 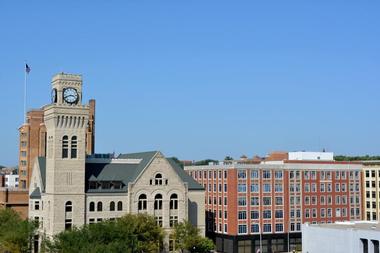 Located on the western edge of Iowa, Sioux City is situated within both Woodbury County and Plymouth County. It is the fourth biggest city in Iowa and is located on the Missouri River. Sioux City covers an area of 59.49 square miles and has an estimated population of 82,000 people, with over 168,000 living in the surrounding metropolitan area.

The city was named after the Sioux Native American tribes that lived in the area when white European settlers arrived. Sioux City was founded in 1854 and incorporated a few years later in 1857. The city boasts several museums and a national historic landmark in the form of the Sergeant Floyd Monument. 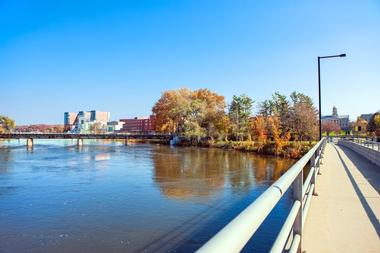 
Located in Johnson County in the central eastern part of Iowa, Iowa City is the fifth biggest city in the state. It covers an area of 25.28 square miles and has an estimated population of 75,000 people, with over 170,000 living in the surrounding metropolitan area.

Iowa City was once the capital of the Iowa Territory and was also the original state capital of Iowa, until being replaced by Des Moines. This city is home to the University of Iowa and is also seen as a popular tourist spot for the state of Iowa due to its history.

25 Best Things to Do in Dubuque, Iowa

20 Best Things to Do in Davenport, Iowa