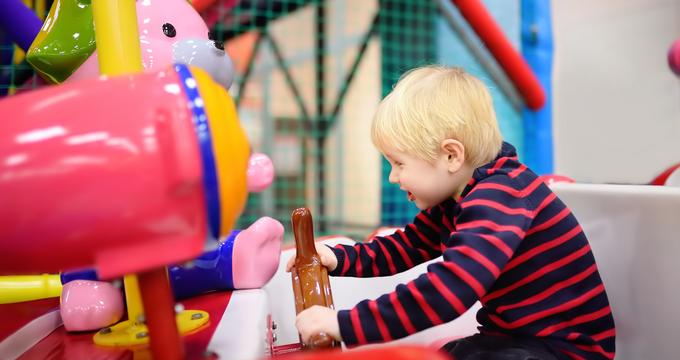 It is easy to entertain kids over the weekend or during a vacation when the weather is warm. But when the rain and snow trap them indoors, keeping them happy is much more difficult, unless you are near one of the fun indoor adventure and amusement parks, where even the largest rides are safely enclosed in a warm space. Las Vegas has the Adventuredome, with 25 attractions under a massive dome. Funplex in Houston has more than 200 rides and attractions. New Jersey has iPlay America, with over 200 rides and games. Cleveland has the 1-week-long annual I-X Indoor Amusement Park with a Ferris wheel and all sorts of other attractions. Wisconsin Dells has its Africa-themed Kalahari Indoor Theme Park, and Bloomington has Nickelodeon Universe, the largest indoor amusement park in the world. Next read: 10 Awesome Indoor Amusement Parks around the world

Located at the Kalahari Resort in Wisconsin Dells, Kalahari Indoor Theme Park offers more than 100,000 square feet of attractions and activities for the entire family. Some of the most popular rides are a six-story Ferris wheel, Revolution 360, and an African-themed carousel. There are also a ropes course, climbing walls, and laser tag games for those who prefer a little more action. The bowling court has 24 lanes, golfers can enjoy the high-definition golf simulator, and the sports bar has a number of flat-screen TVs for those very important games. Still not having enough fun? There are also go carts, arcade and redemption games, mini golf, and much more.

The largest indoor amusement park in the world, Nickelodeon Universe is an indoor amusement park on 7 acres located in the Mall of America in Bloomington, Minnesota. It is the world’s only exclusive Nickelodeon theme park and features 27 fun rides, personal encounters with Nick characters such as SpongeBob, Dora the Explorer, and the Teenage Mutant Ninja Turtles as well as four rollercoasters such as the Avatar Airbender and the Brain Surge. For the small kids, there is the old-fashioned carousel, Big Rigs ride in fire trucks and other huge vehicles, Crazy Cars go carts and much more. Adrenaline junkies love the hair-raising Splat-O-Sphere and Shredders’ Mutant Masher.

Located right on the Las Vegas Strip, the Adventuredome is a 5-acre spectacular indoor amusement park located at the Circus Circus hotel. The hotel and the park are protected by an enormous dome, the world’s largest permanent big top. The park has 25 attractions and rides that include rollercoasters such as Canyon Blaster, a rock climbing wall, clown shows, an 18-hole miniature golf course, the Xtreme Zone, a video game arcade, Pikes Pass, midway games, a virtual reality zone, and so much more. Being enclosed, the park is open all year round as it is not affected by the weather. In October, the Adventuredome becomes the Fright Dome – a Halloween-themed theme park.

Funplex is an enormous 200,000-square-foot indoor entertainment space in Houston that offers fun for all generations regardless of the weather. It is the largest complex of its kind in the States. There are more than 200 attractions and games that include all sorts of rides, bowling alleys, classical and hi-tech modern arcade games, a roller skating rink, go-karts, trampolines, the two-story Playport for children, and so much more. There are also diverse restaurants and a large shopping center. Funplex is a fantastic and very popular place for birthday parties. They organize everything, including food and refreshments; all you have to do is bring a cake.


The I-X Indoor Amusement Park is an annual spring event organized in Cleveland's I-X Center, where for one week, families enjoy dozens of fun rides, live shows, great food, celebrity appearances, and all sorts of special events. One of everyone’s favorites is the 35-foot-tall Ferris wheel, which has its own fantastic glass atrium. From the Ferris wheel, you can see downtown Cleveland in its entirety. Some other popular rides are the Skater – the largest skateboard in the world – an old-fashioned carousel, and a huge rotating swing called the "Freakout." Kidzville is a special area for the little ones with 30 rides and all sorts of activities such as mini IndyCars and the "berry-go-round.”

The bitter Wisconsin winters should not put a stop to family fun. Mt. Olympus Water and Theme Park is an indoor and outdoor entertainment complex in Wisconsin Dells and is divided into four areas. Besides outdoor parks such as Zeus' Playground and Neptune's Water Kingdom, which are closed in the winter, there are The Parthenon theme park and Medusa's Indoor Waterpark, which offer fun all year round. Kids and their parents can enjoy the twirling teacups, bumper cars, and crazy trolley if they want to stay dry, or they can splash in the pools, soak in the steaming whirlpools, and plunge down waterslides in the warm indoor waterpark.

The Tower is an iconic Las Vegas fixture that stands out in the city’s skyline. It is by far the best spot to see the entire city and the valley surrounding it. The Tower is also the site of several unique, adrenaline-pumping adventures. SkyJump is an open-air jump from 829 feet straight down to the neon-lit Strip. At the launching pad on the 108th floor of Stratosphere Casino, jumpers are strapped into a harness and attached to a cable connected to a “descender.” After they jump, moments before they reach the ground, the machine slows down the fall for a safe landing. The Big Shot is another thrill ride in which strapped participants are shot at 45 miles per hour 160 feet into the air from a 921-foot-high platform. Insanity - the Ride is a huge mechanical arm that extends 64 feet at a height of over 900 feet over the edge of the Stratosphere Tower. It then turns its strapped riders upside down, offering them truly unique views of Las Vegas.

Where can you get away, luxury resorts & family weekend hotels to visit around me: Portland, Martha's Vineyard, Miami, WA, MN , From D.C., Destin, MA, AK, Wilmington, Salem

15 Best Things to Do in Laughlin, Nevada

21 Best Places to Visit in Alaska