By VacationIdea Staff on January 4, 2023 - Updated 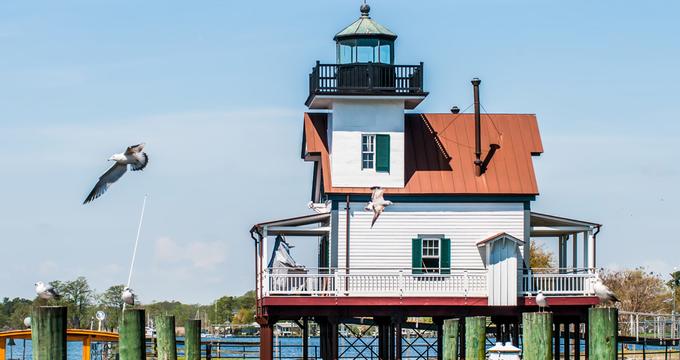 Whether you are a fan of historical lighthouses or looking for a romantic idea for your next weekend break, North Carolina is home to many beautiful lighthouses that are fun to explore. Start your journey at the Roanoke River Lighthouse which includes the Maritime Museum where you can learn about daily life during the mid-1800s. Here are the best North Carolina lighthouses. 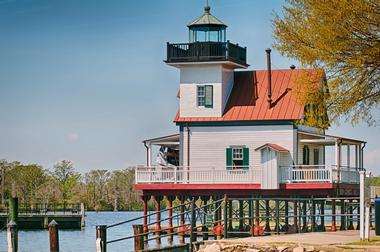 The Roanoke River Lighthouse is actually a collection of light stations that stand high above the Roanoke River. The main lighthouse is a replica of the structure that stood on the banks of the river for more than 100 years. The Maritime Museum is a great place for visitors to learn about the lives of fishermen, merchants, soldiers, and farmers who lived in the area during the mid-1800s. The museum also contains an aquarium, an in-depth boat building exhibit, and a large collection of original photographs. To get a better view of the light stations and the museum, guests can walk along the nearby Rail Switch Nature Trail. Several other museums and important historical sites are located along the path.

Visitors can also tour the beautiful 1886 Roanoke River Lighthouse, which has been moved from the mouth of the Roanoke River to Edenton and restored.

2.Lighthouse Near Me: Cape Lookout Lighthouse

The Cape Lookout Lighthouse stands 163 feet above the Outer Banks of North Carolina. Similar in construction to the Bodie Island Lighthouse and the Currituck Beach Lighthouse, Cape Lookout is distinguished by its diamond-patterned daymark and the fact that its light flashes throughout the day instead of only flashing at night.

The flash guides ships from as far as 19 miles away. The original structure from 1859 still stands, and visitors can access Cape Lookout by private ferry. Guests can also climb the 207 steps leading to the top of the lighthouse from mid-May to mid-September each year.

As the oldest standing lighthouse in North Carolina, Old Baldy has led sailors to the Cape Fear River entrance for nearly 200 years. Although the light inside the lighthouse works, Old Baldy no longer operates as a navigational beacon for ships around the Outer Banks.

Visitors can take a look at the Old Baldy Museum, which includes the Old Baldy lighthouse, the keeper's cottage, and an oil house. Guests can also climb the 108 steps that lead to the top of Old Baldy. Children can make the climb too if they have an adult with them. Keep reading for more lighthouses in NC.

The Bodie Island Light Station stands 165 feet above Bodie Island in the Outer Banks of North Carolina. Erected in 1847, the lighthouse was destroyed and rebuilt in 1859 and 1872 due to Civil War conflicts. The structure was also renovated between 2009-2013 to add a spiral staircase visitors could use to climb to the top.

The lighthouse is distinguished from other lighthouses in the area by its black and white daymark, and since it is part of the Cape Hatteras National Seashore, it is easily accessible to locals and tourists. Things to Do in North Carolina


Located on the Outer Banks of North Carolina, the Cape Hatteras Lighthouse is known for being the tallest brick lighthouse in the United States. At 210 feet tall, it is also among the top 30 tallest lighthouses in the world.

Unlike most lighthouses in the Outer Banks, the Ocracoke Lighthouse isn't available for tourists to climb, and there is no museum, gift shop, or information center at the site. However, there are areas for getting photos of the lighthouse and the surrounding seashore. Guests who would like to pick up some Ocracoke Lighthouse memorabilia can visit gift shops in town.

7.Lighthouse Near Me: Oak Island Lighthouse

The Oak Island Lighthouse is one of the newest lighthouses in America. Finished in 1958, the lighthouse stands 153 feet tall and bears a black, white, and grey daymark. Its light can be seen from a distance of more than 16 nautical miles.

Guests can pay a visit to the lighthouse on Wednesdays and Saturdays from Memorial Day to Labor Day, and tours are also available year-round for guests who want to climb the 131-rung ladder to the top of the lighthouse. The ship ladder-style steps are nearly vertical so the tour is restricted to able-bodied people ages nine and up.

The Currituck Beach Lighthouse sits on the cliffs above Corolla Village in Eastern North Carolina. The redbrick lighthouse has guided ships and boats in the area for nearly 145 years. At 160 feet, the Currituck Lighthouse contains 220 steps that visitors can climb for a panoramic view of the village and the Atlantic Ocean.

The high-powered beam of light emitted from the structure can be seen from a distance of nearly 20 nautical miles. Guided tours are available for visitors who want to learn more about the history and purpose of the Currituck Beach Light Station.

The light in the lighthouse was destroyed by Confederate forces who wanted Union troops to become disoriented in battle. Although only the shell of the lighthouse remains, visitors can go inside, walk up the old stairs, and take pictures of the tranquil area. It is also possible to view the lighthouse by boat if you're traveling along Price Creek.