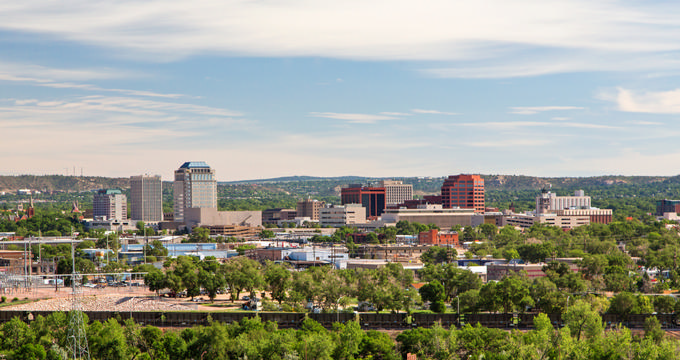 The county seat of El Paso County in the center of Colorado, Colorado Springs is actually the biggest city in the state in terms of its surface area. The city is situated about an hour's drive south of the state capital, Denver, and is nicknamed 'Olympic City USA' due to its strong sport culture and the fact that it houses the United States Olympic Committee and United States Olympic Training Center. Fountain Creek runs through Colorado Springs, with the city being located near the Southern Rocky Mountains and covering an area of 195.11 square miles. It has an estimated population of around 465,000 people, with over 700,000 in the surrounding metropolitan area.

The land that would eventually become Colorado Springs was inhabited by various Native American peoples over the years, including the Ute, Cheyenne, and Arapaho. The territory was included in the Louisiana Purchase of 1803, when the United States bought a large part of land from France for the sum of fifty million francs ($11,250,000). The first settlement was founded in 1859 and was a strong mining town due to its very close proximity to Pikes Peak, which was a key location in the Pikes Peak Gold Rush of 1858-1861.

World-famous scientist and inventor Nikola Tesla set up a laboratory in Colorado Springs in 1899 as well, and the area played a part for the United States military during World War II and the Cold War. In the modern era, the defense industry is still a big part of Colorado Springs' economy, along with technology and tourism. Sport, as mentioned previously, is also a big part of the city's culture. It is home to the headquarters of 24 of the United States' national Olympic sports federations, with many other non-Olympic sports organizations having headquarters in the city too.

Climate and Things to Do in Colorado Springs, CO

The elevation of Colorado Springs has an effect on its weather conditions, with the city having a semi-arid climate with quite cool, dry winters and mild to warm summers. The hottest month of the year is July, which has average highs of 85°F (30°C), while the coolest month is December, which has average low temperatures of 18°F (-8°C). Up to 40 inches of snow can fall in Colorado Springs per year, with most of this snow falling from October through to April.

Colorado Springs has always been a popular tourist destination to its proximity to the Rocky Mountains and particularly Pikes Peak. Over 4 million visitors come to the city each year, with a lot of different attractions all around include the Garden of the Gods, Cheyenne Mountain Zoo, Old Colorado City, and more. Lots of recreational activities can be enjoyed all around Colorado Springs including hiking, cycling, mountain biking, mountaineering, and more.

21 Best Things to Do in Telluride