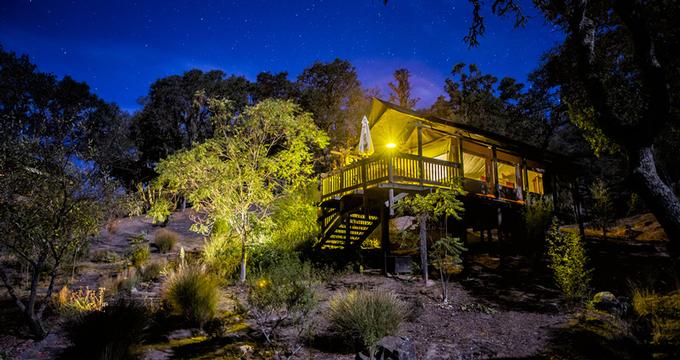 Safari West is a unique African wildlife experience in Santa Rosa, near Sonoma, California. The wildlife preserve, situated in the heart of Napa Valley wine country, is owned by Peter and Nancy Lang, and is one of the very few privately-owned institutions to have full accreditation by the Association of Zoos and Aquariums.

Nancy Lang has a Ph.D. in zoological biology, and specializes in bird life, particularly in raptors, which are birds of prey. Under her direction, Safari West is successfully breeding birds native to Africa. Peter Lang is a lifelong wildlife lover and has been interacting with exotic animals since his childhood. He is also a builder and designer, and has created most of the buildings and hand-hewn furniture at Safari West. The couple met while they were on a safari in Africa, and it was love at first sight.

They dreamed together of conserving wildlife and teaching others about the importance of the animal kingdom and how best to preserve it. To further that dream, they opened Safari West together in 1993; it now spans more than 400 acres, and contains approximately 900 animals of 90 different species. The Napa Valley has a Mediterranean climate, which is ideal for African wildlife, and its mixture of grassland and forest mimics the environment of sub-Saharan Africa. There is also abundant water, which is necessary to support the many animals under the care of Safari West. Peter and Nancy call their haven ‘The Sonoma Savannah,’ and have dreams for it that extend beyond their own lifetime.

The Safari West Wildlife Foundation has been established to care for the animals at Safari West in future years. A non-profit foundation, it looks at the future, and how Safari West is to be preserved as the Lang's age and can no longer fully participate in the day-to-day running of the organization.

Safari West has a savannah-like safari park for African-style wildlife, an open-air aviary, a special preserve for primates, and another for large cats. Those interested in visiting Safari West must make reservations, whether they are coming for one of the three-hour safari drives, or if they are planning to stay overnight in one of Safari West’s authentic African tents. 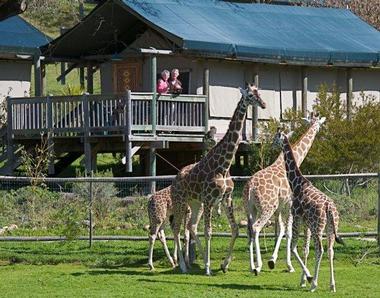 The aviary teems with sound and color. Visitors to the open-air bird center will enjoy the scarlet ibis, a resplendent red bird; the cattle egrets who live by eating insects from the backs of grazing mammals; the multicolored Lady Amherst Pheasant; three different species of hornbills; the iridescent Nicobar Pigeon; and the oddly-beaked African spoonbills. In the safari park there are many other species of bird such as three different types of flamingo, in shades of pink, white and cream; lovely rainbow lorikeets; several species of cranes; graceful black-necked swans; and the ostrich, a perennial favorite among animal lovers.

The safari park is home to hundreds of animals. Zebras, giraffes, wildebeest, Cape buffalo and white rhinos are among the best-known of the park’s residents. There are many more animals to see, particularly ungulates (hoofed mammals), including eland, oryx, Watusi cattle, gemsbok, gazelles, kudu and impalas. The primate zone of the park houses two different types of lemurs, as well as colobus monkeys, De Brazza’s monkey, and the Patas monkey. The wild cat enclosure is home to cheetahs, caracals and servals.

The cheetah is perhaps the most popular animal at Safari West. The sleek form of the cheetah, its beautiful spotted fur and its adorable cubs make it a favorite of many animal lovers. The word “cheetah” is derived from a Hindi word meaning “spotted one.” The fastest of land animals, the cheetah can reach speeds of up to 85 miles per hour. Cheetahs hunt by running, unlike other felines, who use the stalk and leap style of hunting. Although it is a majestic creature, the cheetah is not considered a “big cat” like lions and tigers, as the cheetah is unable to roar. In order to roar, a cat must have a floating hyoid bone in its throat, and in the cheetah, the hyoid bone is fixed in place, leaving it unable to produce the loud vocalizations of other large felines. The cheetah is most at home in grasslands, and today mostly survive in Namibia. Due to the encroachment of farms in Namibia, almost all of the country’s remaining cheetahs live on cultivated land, and are in grave danger of loss of habitat. As a rule, cheetahs do not breed well in captivity, and so their future is uncertain.

Giraffe are wildly popular animals on game drives, and guests respond to them with shock and awe. It is not until guests are close to giraffes that it can be appreciated how truly enormous these animals are. Safari West has two different kinds of giraffes: Reticulated Giraffes and Masai Giraffes. Masai Giraffes, particularly the males, are taller than Reticulated Giraffes, and there is a vast difference in the markings of the two sub-species. Masai Giraffes have uneven dark brown spots that most resemble oak leaves, while Reticulated Giraffes have markings that are almost geometrical, like polygons, with smooth, straight sides. Giraffes are the tallest animal in the world; even infant giraffes are taller than most humans. Giraffes eat, sleep and give birth standing up, although they do not sleep very much. Unusual in the animal kingdom, giraffes sleep only two hours a day, sometimes less. 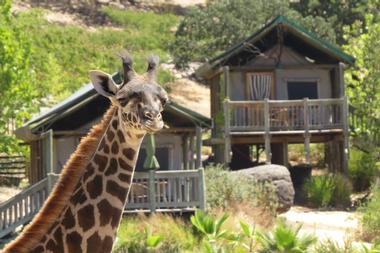 Standard Safari adventures involve a three-hour tour of the savannah. Two-thirds of that time is spent driving through the acreage of the wildlife preserve, the remaining time is spent in the aviary, and at the big cat and primate enclosures. Children under the age of four are not permitted on the safari drive but are most welcome in the walking part of the tour.

Nerdy safaris are designed for those who have a background in biological or zoological science, or have a strong interest in the area. These tours are led by trained biologists, who give safari-goers information on a technical level, and who teach guests about bio-geography and evolutionary theory. Guides will talk about the set of circumstances that has led to animals existing as they do today, and look at the future, and how natural and artificial changes in the world environment may lead to change in animal species.

Private safaris can be arranged with the Safari West staff. Interested people might enjoy The Ultimate Private Safari, in which the guests can choose where to spend their time, and on which animals they choose to focus. Photographers are particularly fond of this tour, as it allows them to take pictures of their chosen animals when the light suits them best.

The Brews and Buffalo Safari includes a game drive and beer sampling along the way from beers originating in Sonoma County. Savory snacks are included. The guide for this tour has background knowledge in beer brewing and tasting as well as a wide knowledge of animals in the park. Similarly, the Winos and Rhinos Safari is led by a guide knowledgeable about wine making and tasting. This safari includes a game drive, and then a picnic on the vehicle on a hilltop under live oak trees, overlooking the Sonoma savannah. Guests are served South African wines and vintages from the Francis Ford Coppola winery nearby, in addition to a hand-selected array of local artisan cheeses and breads. This tour also includes admission to a tasting at the Francis Ford Coppola winery in the Alexander Valley. The Cheetahs and Chardonnay tour allows guests to get up close to Safari West’s cheetahs and their handlers, while drinking selected local and South African wines and enjoying African ranch barbecued food.

Another popular private tour is the Serengeti Twilight Private Safari and Dinner. Seated at African-made safari tables on the shores of Lake Watusi, guests of this safari are able to overlook the safari grounds from a hilltop and watch silhouetted wildebeest wander the park and stop to drink. Although the food served is typical African barbecue food, it is set out on white linen cloths with elegant place settings, and accompanied by local beers and wines, as well as South African vintages. 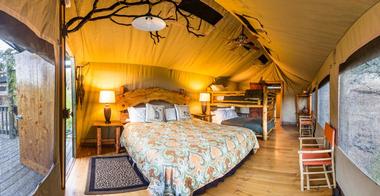 An overnight stay at Safari West brings together the wild of the safari drive with the luxury of genuine South African safari tents. Imported from Ladysmith, South Africa, these sturdy canvas tents house plush beds, a hot shower, polished oak floors and hand-hewn furniture. The tents are built upon high wooden platforms, and have wide decks for wildlife viewing. Overnight guests are far enough away from animals for safety, but close enough to see wildlife walking about, feeding and socializing. At nighttime, guests may be disturbed happily by the fantastic sounds of the African wild at night such as grunting, movement, conversation and the loud cries of the flamingos and the Sarus Crane. When morning comes, a continental breakfast is available for overnight guests.

A special bonus for overnight guests is the availability of massage in the privacy of their tent. A Registered Massage Therapist is available to give Swedish pressure-point massages if arranged in advance. 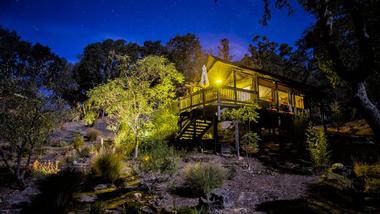 The Savannah Grill is the best place in California for authentic South African barbecue cuisine. Open for lunch and for dinner, guests may eat indoors, among authentic African handicrafts, or outside on the veranda, at custom-made wooden tables, set near a fire pit and vine-covered arbors.

Back to: Best Birthday Vacation Ideas and 18 Best Things To Do in Santa Rosa

-- You are reading "Best Things to Do in Sonoma, California: Safari West this Weekend with Friends" Back to Top

You are reading "Best Things to Do in Sonoma, California: Safari West " Back to Top