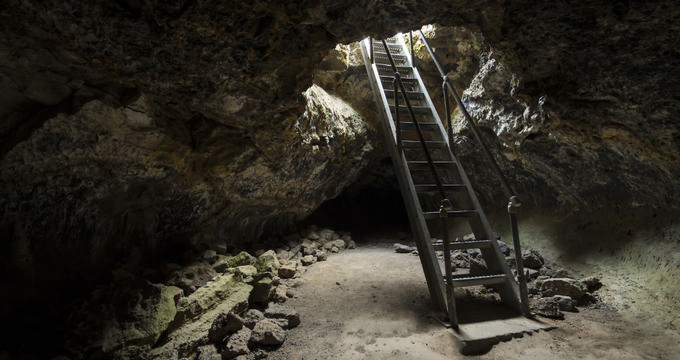 California has it all. From sprawling cities to beautiful beaches and everything in between, the Golden State has some of the prettiest landscapes in all of North America. Above ground, natural and man-made landmarks like redwood forests, breathtaking beaches, and city skylines in places like Los Angeles and San Francisco capture the hearts of millions of visitors, but California has a lot of beauty below the surface of the Earth as well.

Formed by volcanic activity thousands of years ago, a huge network of caves and lava tubes stretch out beneath the ground. There are plenty of lava tubes to explore all around California, with each one offering its own unique, winding passageways and rock formations. Exploring lava tubes can be a lot of fun with friends and family, or even as a solo adventurer, and California is one of the best states for this kind of activity.

If you’re looking to do some lava tube exploration in the Golden State, there are a lot of options available to you. Here are some details and overviews on the top lava tube sites in California.

Attracting tens of thousands of visitors per year, the Lava Beds National Monument is the number one spot for lava tubes in California. This location can be found in the northern part of the state, not far from the border with Oregon. There are more than 700 lava tubes at this location! Visitors can't check out every single one of them at will, but at least 20 of the most-developed lava tubes are usually open for exploration throughout the year.

Guided tours can also be reserved to help you learn more about the cave systems, and all guests are encouraged to visit the national monument's visitor center and speak to staff to learn more. The easiest lava tubes to explore at this location include Big Painted, Mushpot, Sentinel, and Heppe, while the more challenging caves like Labyrinth and Lava Brook may involve some crawling and a certain level of physical fitness.

Down in Southern California, the Pisgah Lava Tubes can be found at the Pisgah Crater. There are quite a lot of lava tubes to discover in this area, with the best and largest example being SPJ Cave, which runs for approximately 1,300 feet. There are no staff on site at this location and it's not as heavily visited as a place like the Lava Beds National Monument, so if you arrive on a good day, you might have the whole place more or less to yourself.

This lava tube can be found in Lassen National Forest in the northern part of California, not too far from the Lava Beds National Monument. Subway Cave is a large, open lava tube that runs for around 1/3 of a mile. It features quite a bumpy floor and some very interesting rock formations, making it a must visit for lava tube lovers in California. Guided tours run at this location in the summer.

This is actually one of the smallest and easiest-to-miss lava tubes in California, but it's a must-visit location for any caving enthusiast. Why? Well, the first advantage of this lava tube is that it has a full stairway installed and has a nice flat floor, making it easily accessible for visitors of all ages and fitness levels. But the real advantage of this California lava tube is its unique beauty. Due to the way the cave formed, a beautiful ray of light shines down into it, creating a stunning visual effect that needs to be seen to be believed.

If you’re planning a lava tube expedition in California, there are several important things to bear in mind. First of all, note that even on sunny days with 90 degree weather, the air inside the caves is always quite cold. Temperatures rarely go above 40 in the lava tubes, so you’ll need to pack some coats and layered clothing to keep warm. Strong footwear is essential too as the caves can often have slippery surfaces. You might need to bend down or even crawl in certain locations, so covering up with jeans and jackets is a good idea to avoid any accidental scrapes or cuts on the rocky walls and floors, and don’t forget to bring flashlights as it can get very dark inside a lava tube.