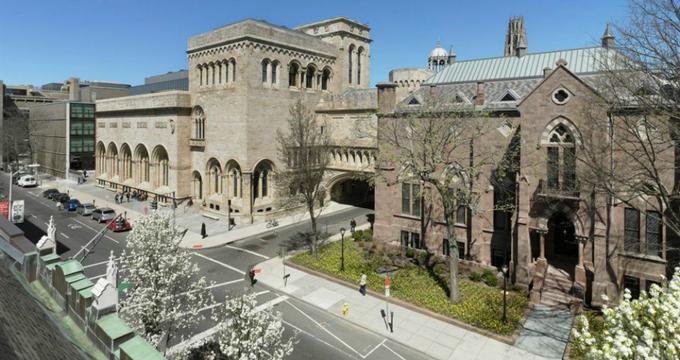 The neoclassical building that the initial collection was housed in was designed by history painter and portraitist, John Trumbull. He designed the building to house the 88 paintings and portraits that he sold to Yale University. The Trumbull Gallery became the first college art museum in the United States. Sadly, the Trumbull Gallery is no longer standing and Yale University's Art Gallery collection is currently housed amongst three historic structures: Street Hall (1866), Old Yale Art Gallery Building (1928), and the Louis Kahn Building (1953).

Street Hall was opened originally opened in 1866 and was known as the Yale School of Fine Arts. The building was designed by Peter Bonnett Write and was named after Augustus Russell Street, a local businessman who donated the funds for the building's construction. It was the first art school on an American college campus and one of the first to allow classes to be attended by both male and female students simultaneously. Street Hall has classrooms and studios on the first floor, galleries for exhibiting the collection on the second floor.

The Old Yale Art Gallery Building was designed by architect Egerton Swartout and was meant to unite the University's art collections. Construction took approximately two years and the building was finally opened to the public in 1928. A bridge was built between the new building and Street Hall to achieve this goal. There are a variety of architectural personifications on this bridge symbolizing architecture, drama, painting, and sculpture.

The Louis Kahn Building was opened in 1953 and is the first modernist building at Yale University. It resides beside the other two gallery buildings, which feature the neo-gothic designs. The Kahn building is constructed of masonry, concrete, glass, and steel, and presenting a windowless wall along its most public facade. Kahn's design has been celebrated for its beauty and its structural innovations.

The three buildings consisting of the Yale University Art Gallery have undergone quite a bit of renovation and remolding in the last few decades. In 1998, the Gallery was asked by then Yale President Richard Levin and his staff to produce a plan that would enhance the mission of the teaching museum and its galleries. The Gallery staff came up with a goal: To provide easy access to the collection, through increased public exhibition space and dedicated classrooms. As a result, the Gallery began a major renovation of all three buildings in 2004.

The renovations were completed in 2012 and included: Additions to the upper level of the Old Yale Art Gallery that created room for a rooftop sculpture terrace. Eight new classrooms, the development of the Nolen Center for Art and Education. The renovations enhanced the Gallery's ability to remain one of the nation's most prominent institutions.

The Mission of the Yale University Art Gallery is to "encourage appreciation and understanding of art and its role in society through direct engagement with original works of art". Through the organization of exhibitions, the Gallery hopes to engage and stimulate a deeper appreciation and understanding of art within not only their students, faculty, and staff, but amongst the community as a whole. The dedicated staff at the Gallery and the University believe that the continued maintenance, education, and preservation of these priceless works is important for future generations.

There are 13 major collections at the Yale University Art Galley consisting of more than 200,000 objects representing Eastern and Western cultures and ranging in date from ancient times to the present day.

There are thousands of rare and exciting objects spread throughout 3 architecturally brilliant buildings for visitors to explore at the Yale Art Gallery. The collections include: African Art, American Decorative Arts, American Paintings and Sculpture, Ancient Art, Art of the Ancient Americas, Arts of Islam, Asian Art, Coins and Medals, European Art, Indo-Pacific Art, Modern and Contemporary Art, Photographs, and Prints and Drawings.

The African Art collection contains approximately 2,000 objects that represents more than3,000 years of African history. A variety of objects can be found in this collection, including masks, figures, utilitarian objects, jewelry, ceramics, and textiles from throughout the continent. Highlights from this collection include ritual figures and masks from West and Central Africa, and terracotta antiquities from the Sahel area.

The American Decorative Arts collection ranges in date from the 17th century to the present. Highlights of this collection include the Mabel Brady Garvan Collection, it is the core of the collection and is renowned for rare examples of American silver.

The American Paintings and Sculpture collection is considered one of the greatest public collections of American art in the nation. The Yale University Art Gallery has been collection American art for approximately 250 years and currently, the collection contains prominent pieces from almost every period in American history. These are representative in a variety of objects, including paintings, miniatures, and sculptures.

The Ancient Art collection comprises over 13,000 objects from the ancient Mediterranean world, including places like Egypt, Greece, Etruria, and Rome. Highlights from the collection include important finds from Yale University's own personal excavations in the 1920s and 1930s in Syria and Jordan.

The Art of the Ancient Americas collection comprises approximately 1,500 objects and spans more than 3,000 years. Highlights of the collection features pieces from the Maya tribe and their predecessors. The collection also includes ancient pieces from Costa Rica, West Mexico, and the Andean regions.

The Arts of Islam collection contains works on paper, ceramics, textiles, metalwork, coins and medals, and architectural elements dating between the 7th and 20th century. The Coins and Medals collection contains approximately 100,000 pieces, making it the largest and most diverse held by any American university.

The Asian Art collection comprises approximately 6,700 works from East Asia, continental Southeast Asia, South Asia, Iran, and the Near East and spans the Neolithic period to the 21st century. This collection includes Chinese ceramics and paintings, Japanese paintings and prints, and Indian and Persian textiles and miniature paintings.

The Indo-Pacific Art collection represents the art of maritime Southeast Asia and includes about 1,900 objects. Highlights of the collection include Javanese gold from the prehistoric to the late medieval period, and Indonesian textiles.

The Modern and Contemporary Art collection contains exemplary works from the 20th century and the 21st century. Highlights of this collection incuded vibrant works by Pablo Picasso, Georges Braque, and Wassily Kandinsky.

The Photographs collection spans the medium's entire history, with large holdings of work made in America during the 20th century. One particular highlight of the collection is the complete sets of master prints by Robert Adams and Lee Friedlander.

The Prints and Drawings collection comprises approximately 28,000 prints and over 10,000 drawings and watercolors from the 15th century to the present. Highlights of this collection include more than 800 post-war prints obtained quite recently.

The Yale University Art Gallery hosts a variety of ongoing programs mainly focusing on the education and awareness of art within the local community. There are plenty of resources for educators and parents to get children involved and interested in artwork. The goal of the Gallery's staff is to engage and educate all members of the community on their diverse and prominent collection.

The Yale University Art Gallery if free, open to the public, and offers a variety of touring options for visitors. Group tours, student tours, and self-guided tours are all available at the Gallery.

As for food, there is no cafe on the Gallery property, but there are plenty of restaurants and coffee shops within walking distance. There is discounted parking nearby if visitors are attending the gallery, however, street parking is metered. The Gallery is located at 1111 Chapel Street between York and High Streets.