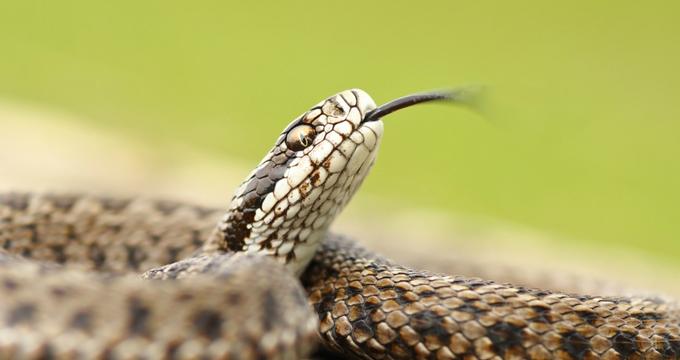 Ilha de Queimada Grande, also known as Snake Island, is located in the Atlantic Ocean, 90 miles off the coast of the city of Sao Paolo, Brazil. Access to the island is prohibited by the Brazilian government, as the deadly island is home to between 2,000 to 4,000 of the world’s most poisonous snakes. With just 110 acres of land, that’s potentially 1 snake for every square meter.

The island’s main inhabitant is the golden lancehead pit viper, an endangered species that thrives on this isolated strip of land where the predators are few to none. The golden lancehead uniquely evolved on this island from the jararaca pit viper and carries a much more potent venom than its mainland cousins. Named for its golden color and the shape of its head, the golden lancehead carries the unique characteristic of the genus Bothrops: An elongated head that comes to a point at the nose. Due to the snake’s isolation, there have been very few reports of humans being bitten.

However, the snake's venom has been extensively studied, and has the potential to kill humans in less than 1 hour via kidney failure, brain hemorrhaging, necrosis of muscular tissue, and intestinal bleeding. Analysis of the venom confirms that it is the deadliest and most fast-acting of the genus Bothrops. Due to habitat loss, a decline in available prey, and the inbreeding of the island-bound species, the species is considered endangered and is currently listed on the International Union for Conservation of Nature's Red List. The island itself has a temperate climate and rises approximately 700 feet above sea level in places. The varied terrain ranges from bare rock and open grassland to rainforest. Temperatures stay fairly steady throughout the year, between 65°F and 80°F.

History: Local lore has it that the snakes were put on the island by pirates, who wanted to protect their gold. However, the snakes more likely evolved on the island over the course of the past 11,000 years when the island was first isolated from mainland Brazil due to a rise in sea levels. The lack of predators on the island allowed for the proliferation of the creatures, especially as the snakes themselves evolved to expand their prey, learning to climb trees and nab migratory birds. It was the transition to birds as the primary diet that encouraged the evolution of the deadly venom. Without the ability to track their prey while the slow-acting venom did its work, the snakes that survived over time were those with the stronger venom, whose prey succumbed more quickly to a bite. This has led to the unique behavior by which the snakes keep their prey in their mouths after the bite.

Lighthouse keepers lived on the island alongside the snakes from 1909 until the 1920s. It was during this period that the island got its name; quiemada means to slash and burn, and the island was undergoing a process of deforestation to be used as a banana plantation. When a lighthouse keeper and his family were killed by the venomous snakes in the 1920s, the Brazilian Navy closed off the island, and automated the lighthouse. The snake’s habitat continues to decline, however, due to ongoing reduction of the rainforest by the navy.

Ongoing Programs and Education: The island is off-limits to tourists due to an ordinance from the Brazilian government, and any trips made to the island must be accompanied by a doctor due to the danger posed by the snakes. The Brazilian Navy visits annually to maintain the lighthouse, which has been automated since the 1920s. Scientists, biologists, and researchers from the Chico Mendes Institute for Biodiversity Conservation, the Brazilian federal conservation unit, occasionally go to study the snakes, which are close cousins of the lancehead viper, the snake responsible for 90% of snakebite deaths in Brazil. Researchers must be vetted by the government before access is granted. The ban on travel does not stop wildlife smugglers, who illegally visit the island to capture the snakes for sale. Now endangered due to degradation of their environment, inbreeding, and disease, a single golden lancehead viper can earn a smuggler as much as $30,000 on the black market. Snakes are sold on the black market to collectors and overzealous scientists.

17 Best Things to Do in Deerfield Beach, Florida

Things to Do in Alaska: Alaska Wildlife Conservation Center