Things to Do in Mesa, AZ: Arizona Museum of Natural History 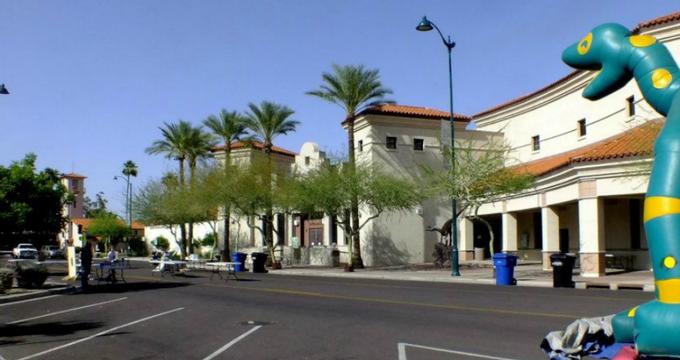 The Arizona Museum of Natural History, dedicated to showcasing and preserving the cultural and natural history of Arizona and the surrounding American Southwest, was founded in the Mesa, in 1937. The museum was named Mesa Southwest Museum at the time and houses a small collection of artifacts relevant to Arizona history. The building was originally the mesa city hall and housed the municipal courts, police and fire departments, the jail and the city library. Arizona Museum of Natural History, AzMNH, underwent several renovations over the last two decades, including adding an entirely new wing in 2,000 and a research facility in 1995.

The museum currently contains over 60,000 artifacts from research and donations that are housed in the 74,000 square foot building. Arizona Museum of Natural History is partnered with The Southwest Archaeological team to support the archaeology and anthropology section of the museum. Made up of volunteers, this award winning team conducts research on Native American culture in the southwest and develops the exhibitions in this area. Many of the artifacts are found in active excavation site, Mesa Grande. The Paleontology section of the museum is the primary objective of the AzMNH. Researches work directly for the museum and are also involved in many projects throughout the southwest. The natural history section of the museum is in charge of the excavation, research, and preservation of the fossil collections at the museum and work with several universities and state and local agencies in this effort. 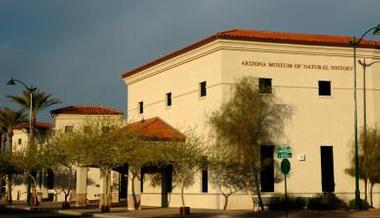 The Cenozoic Lobby is the main entrance to the AzMNH. Guests are welcomed in to the museum by creatures from over three million years ago up until about 10,000 years ago known as the Pliocene-Pleistocene Epochs. Some of the animals are a Columbian mammoth, a mastodon, ancient horses, the American lion which has been extinct for 10,000 years and the megalodon jaws. All of the animals are displayed as giant fossils. The megalodon jaws hang over the interior museum entrance.

The Natural History Exhibit features a collection of five different exhibitions as focusing on an aspect of the natural history of the American Southwest. Origins, studies the universe and discusses the history of planet earth and its place in the cosmos, how it has evolved from the big bang theory and some of the different space explorations that America has been completed. Many NASA satellite images decorate this space and also the use of computer generated images of what the earth would’ve looked like in all its many stages from conception through present time are plotted throughout the display. Origins also showcases the origins of Humans and what our evolutionary process looked like.

Arizona Through Time exhibition takes visitors from the first bacteria to the great T-Rex, while the early history of Arizona is plotted out. See the landscape change from a more tropical climate, to the arid desert that Arizona is today after the fall of the dinosaurs and the Ice Age.

The Paleo Dig Pit is a truly interactive experience where people can dig for fossils and dinosaur eggs. The pieces dug up in this area are not authentic fossils, but are life size replicas that make children feel like paleontologists themselves. This is a great space for the kids to play while adults take a little rest. 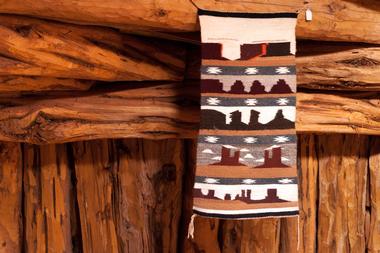 Southwest Cultural Exhibit is the primary focus of the Archaeology program at the museum. This exhibit is dedicated to Native Peoples of the Past in and around the southwest. The exhibit begins with the Paleoindian hunters who first came to the area almost 13,500 years ago and travels through the hunter gatherers who moved across the area and the Hohokam, Anasazi, and Mogollon Native American people. There are replicas of their homes, the landscape and the pottery that the later prehistoric people are now known for. Visitors also will learn about how these cultures were pushed aside when miners and conquistadors came to the land.

The Mesoamerica and South America Exhibit is home to a collection of four exhibitions. This section of the museum links the ancient cultures of Mexico and South America to the ancient peoples of the American Southwest. The Ancient Cultures of Mexico exhibition explores the colossal heads of the Olmec, the Tlatilco people who were known for their figurines, and the ceramic traditions that are still in use today from the western Mexico cultures. The Classic Mayan exhibition showcases some pieces of Mayan architecture and ceramics and discusses the rise and fall of the Mayan empire. The last culture presented is the North Coast of Peru. This exhibits some of the oldest ceramics in the Americas.

The last permanent exhibit is the Fun with Arizona History section of the AzMNH. Spanish conquistadors and priests were among the first people to come to the area that is now the state of Arizona. History of Arizona is explored from the Coronado days through becoming a territory and then state. Visitors can experience what mining was like in the Lost Dutch Mine replica and see the stage coaches from the old west. There are stories of infamous bank robbers and looters, the old west rivalries and other well-known myths and stories from the old west days.

The Exploration Station is a special room in the Arizona Museum of Natural History where people of all ages can explore the different exhibits in a scaled down version full of hands-on interactive learning. This exhibit is only opened when staff coverage is optimal and is also rented out for private groups, school field trips and parties. When staff are present, there are many demonstrations and child friendly lectures that take place. 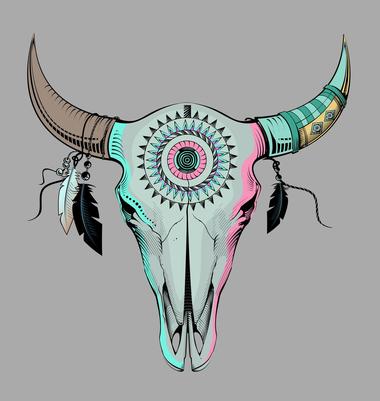 Because the Arizona Museum of Natural History is home to thousands upon thousands of artifacts, there are three exhibit stations that are used as rotating spaces. Sometimes the current exhibits may be displayed for a year, or they may be changed for special occasions

The Cultures of Ancient Americas is currently on display and focuses on the three eras of ancient peoples in the American Southwest. Many Native American cultures such as the Navajo, Hohokam, and Apache are explored in this exhibition. From the first Paleoindian peoples all the way through the plains people and what modern people think of when they learn of Native Americans in the area. Replicas of pit houses and other abodes are on display along with ancient ceramics including pottery.

Cretaceous Seas is a part of the Arizona through Time exhibit that specifically focuses on the transitions prehistoric animals had from sea onto land and the evolutionary process associated with it. Journey back to before the dinosaurs to the first creatures to ever walk on land. There are even plants that made a sea to land transition and 11 other species besides fish to amphibians that visitors can learn about in this exhibition.

Rulers of Prehistoric Skies features the biggest animals to ever take to the skies, the Pterosaurs. These ancient animals were not dinosaurs or birds and ruled the skies over 65 million years ago. Often times mistaken for Pterodactyls, replica bones of these creatures hang from the ceilings and over the tree top in this larger than life exhibit.

One of the unique things about Arizona Museum of Natural History is that it is also a research center for paleontology and archeology. Researchers and those with the proper credentials such as professors, can set up an appointment to spend time in the collections that are in storage. These items are occasionally on display in the rotating exhibit and only viewable by appointment when not being featured in the Exhibits.

Mesa Grande Cultural Park is an excavation site in the middle of the city that is home to a Hohokam temple mound. Listed on the National Register of Historic Places, the Mesa Grande has been open since the 1980s in an effort to preserve the culture. It is open to the public and volunteers with many different universities and agencies in Arizona work with museum staff to preserve these ruins. Mesa Grande Cultural Park is not on the Arizona Museum of Natural History grounds and does require a separate admission price.

The Arizona Museum of Natural History is a popular location for birthday parties, corporate functions and weddings. Even high school proms have been hosted at the AzMNH. Birthday parties are a blast at the museum with private rooms for the party and then exploration time until the museum closes.

Things to Do in Mesa, AZ: Arizona Museum of Natural History

Best Things to Do in Mesa, Arizona: T.C. Eggington’s

14 Best Things to Do in Cornville, Arizona

19 Best Things to Do in Lake Havasu City, Arizona