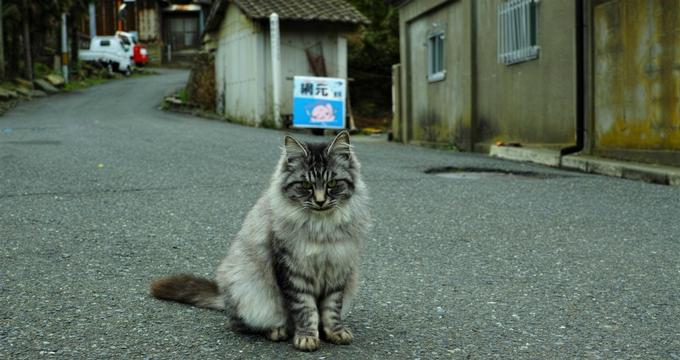 Islands around the world tend to have fluctuating populations, generally either decreasing or increasing in size due a slew of contributing factors. One of the Japanese islands, lying off the coast of the city of Ishinomaki, is Tashirojima. Although this island has been diminishing in population, it has not lost its beauty and is today also known as "Cat Island," and for good reason, too: It is home to numerous cats.

The main industries on the island of Tashirojima are fishing and tourists, but for hundreds of years, the island was also known for its silk production. During the 18th century, the locals on the island raised silkworms, making some of the finest silk off the coast of Japan. In order to keep their silkworms and silk safe, the locals thought that cats would be a good solution to keep the local mouse population from ruining their silk. Now, cats outnumber the human population by six to one. Today, tourism has become a huge part of the island’s economy, as tourists from around the world come here to catch a glimpse at all the amazing feline communities. After the devastating Tohoku earthquake and resulting tsunami in 2011, the islanders believe that the feline community helped to warn them, thus saving the island from further destruction, and today the locals think of the cats as their good luck charms. Despite the depleting number of humans, this island is still full of life and culture.

In a world dominated by humans, Tashirojima is an exception as the island has slowly been taken over by felines. Over the past 50 years, the human population decreased significantly from 1,000 to 100 inhabitants, with an average age between 60 to 70 years old, meaning that future human habitation of the island is looking increasingly unlikely. Nevertheless, the remaining humans stick by their feline companions and the people of this island are very superstitious about their cats and there are many legends and myths surrounding them. For example, local fishermen believe that by feeding the cats every day they have a good chance to catch more fish. They also believe that by monitoring the cats’ movements and actions, they can predict the weather and fish movement patterns.

When a member of the feline community dies, the locals believe that it is their duty to protect and preserve their bodies. Between the two villages of the island lies the Nekokamisama cat shrine, which was originally built due to the accidental death of a cat that was hit by a falling rock. A local fisherman, who felt responsible for the death, decided that a shrine should be built to honor the fallen cat and save the island from evil spirits. There are at least 10 shrines devoted to sacred cats that have died on the island as well as over 50 dedicated stones in the shape of a cat.

The island of Tashirojima is only accessible by boat or ferry and is located 15 km from the city of Ishinomaki on a 40-minute ferry ride. Guesthouses have been built on the island, offering overnight stays. The ferry can either take visitors to Odomari Port on the northern part of the island or to Nitoda Port located on the southern part.

25 Best Things to Do in Phuket, Thailand