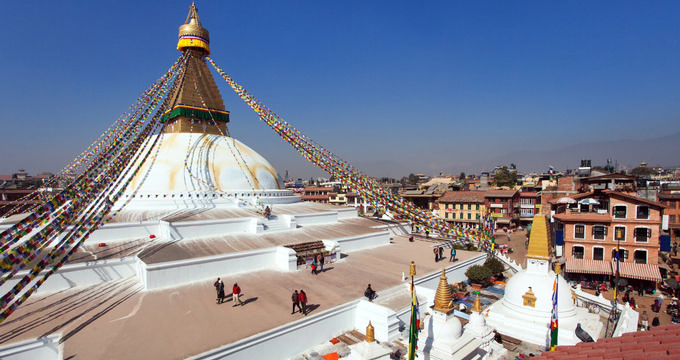 The cultural and economic heart of the nation of Nepal, Kathmandu is also the country's capital and largest metropolis. The city is located in the eponymous Kathmandu Valley, which also houses the cities of Bhaktapur, Kirtipur, Madhyapur Thimi, and Lalitpur. Kathmandu has a population of around 1.5 million people, with approximately 3 million in the surrounding Kathmandu Valley area. 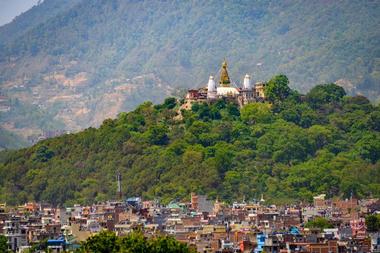 The city is seen as the gateway to the Himalayas and has an incredible history behind it, being settled many centuries ago. Historians and archeologists exploring Kathmandu have found evidence of civilizations dating back several millennia, with various peoples migrating to the valley and inhabiting the area over time. There are a lot of stories to be heard in Kathmandu and the city's streets are lined with mixtures of old and new buildings as a testament to its rich history.

With unique sights, smells, and other sensory experiences all around, Kathmandu is a highly popular touristic destination and one of the most visited capital cities in all of Asia. Especially over the last few decades, tourism has skyrocketed in the area, with hundreds of thousands of visitors flocking to Kathmandu each and every year. Many new hotels, restaurants, and stores have opened up to cope with the influx of tourists, and the city boasts a huge array of sights and attractions like its historic Old Town district, the 'Garden of Dreams' area, and various old temples and monuments. 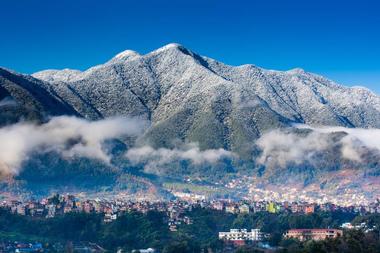 Whenever we talk in detail about a town or city, elevation is an important factor to mention. Elevation is a geographical term relating to the height of an area in relation to sea level and can be important and influential in a variety of ways, like having an effect on the climate, for example. The elevation of Kathmandu is particularly interesting as Nepal is known for being one of the highest countries on the planet.

Statistically speaking, the nation of Nepal is second only to Bhutan in terms of elevation, with Nepal's average elevation being 10,712 feet (3,265 m) above sea level, while Bhutan's mean elevation is just slightly higher at 10,761 feet (3,280 m). The elevation of Kathmandu is 4,600 feet (1,400 m), making it much lower than the nation's average, but still immensely high when compared to the majority of cities all around the world. Many major towns and cities are built in low-lying coastal areas with elevations of 500 feet (152 m) or less, so Kathmandu’s elevation towers above many other places and it’s one of the highest capital cities on Earth.

Nepal is famously home to the Himalayas, which are just nearby Kathmandu and are also the highest mountain range in the world in terms of elevation. There are 14 mountains on Earth with elevations of 26,247 feet (8,000 m) or higher and Nepal is home to eight of them, including the world-famous Mount Everest, which has an elevation of 29,029 feet (8,848 m) and is the highest mountain on Earth. Nepal is also home to the 3rd, 4th, 5th, 6th, 7th, and 8th highest elevation points on the planet as well, and all of these enormous mountains help to give the country its high average elevation.

3.Climate and Things to Do in Kathmandu 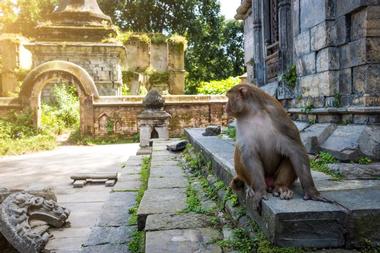 The elevation of Kathmandu plays a big part in its climate. The climate all around the Kathmandu Valley can actually vary greatly due to differing elevations and conditions. This means that the city of Kathmandu technically has two different climates depending on which part of the city you're in. The lower elevated areas have a humid subtropical climate, while the higher areas show signs of a subtropical highland climate. This means that the weather can be quite unpredictable in Kathmandu, but temperatures tend to stay relatively warm all year long and are even quite mild in winter. The city has a monsoon season from June to August, with huge amounts of rainfall occurring at this time of year.

Kathmandu is an incredible city with a lot to offer. It's the cultural and commercial heart of Nepal, with incredible architecture and an unparalleled atmosphere in every street and alleyway. Shopping, sightseeing, cuisine, and spirituality can all be explored in this beautiful city. Some of the key sights in Kathmandu include the UNESCO World Heritage Site of Durbar Square, the Old Town district, the Swayambhunath Buddhist temple, and the Pashupatinath Hindu temple. The Himalayas can also be tackled from this area, with Kathmandu being a key base for mountaineers, adventurers, and explorers of all kinds.