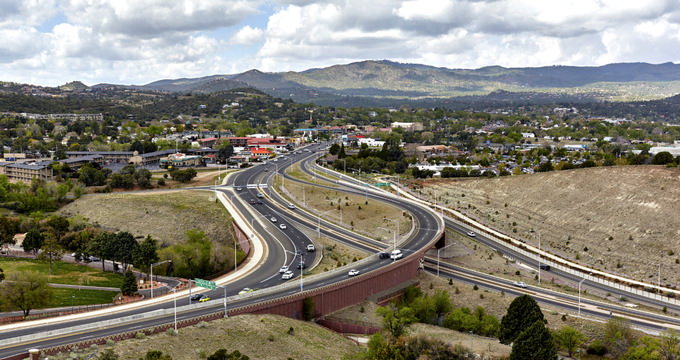 Sitting in the center of Arizona in Yavapai County, Prescott is a relatively big and fascinating city with incredible history behind it. It's the county seat of Yavapai County and has an estimated population of around 43,000 people. Prescott covers an area of over 45 square miles and forms the Quad-City area with neighboring towns Prescott Valley, Chino Valley, and Dewey-Humboldt. In the past, Prescott was twice named as the capital city of the Arizona Territory.

The Arizona Territorial Governor, John Noble Goodwin, surveyed the land and selected the site for Prescott to be built. The town was named after historian and author, William H. Prescott and was the territory's capital from 1864 through to 1867, when the title was given to Tucson. Prescott became the capital once more in 1877 and held the honor until 1889, when Phoenix was made the capital. In its early days, Prescott served various mining camps and areas nearby, but grew over the years into something more than a simple mining town, boasting various museums and points of interest for residents and visitors.

Nowadays, Prescott is well known for these key historical locations, with more than 800 buildings in the city listed on the National Register of Historic Places. Prescott, AZ is home to the tallest house in North America and is also famous for its Whiskey Row district, an iconic street with old Western saloons and buildings all along it. The city is also well-known as a top rehabilitation location, leading the way in detoxification with many rehab and recovery centers.

The elevation of a town or city tells us how high or low it is in relation to the mean sea level of Earth. The city of Prescott, AZ has an elevation of 5,368.23 feet (1,636 m), which is exceptionally high when compared to the majority of other towns and cities all around the United States, especially major coastal locations like Los Angeles or New York City. The nearby towns of Prescott Valley, Chino Valley, and Dewey-Humboldt have elevations of 5,026 feet (1,532 m), 4,707 feet (1,435 m), and 4,581 feet (1,396 m), so Prescott, AZ, has the highest elevation of the four cities that make up the 'Quad-City' area.

Arizona residents are used to living at relatively high elevations in general as the state is one of the highest in all of America. Arizona has a mean elevation of 4,100 feet (1250 m), so the elevation of Prescott is significantly higher than the state’s average. . The highest point in the state of Arizona is Humphreys Peak, which stands at a very high elevation of 12,633 feet (3,851 m) and can be found a short drive from the city of Flagstaff. Meanwhile, the lowest point in the state of Arizona is a section of the Colorado River which is situated just 70 feet (21 m) above sea level.

3.Climate and Things to Do in Prescott, AZ 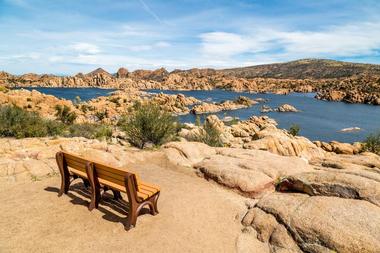 Due to Prescott's location and high elevation, it has quite dry and cold weather for large parts of the year, but temperatures can start to rise through June, July, and August in particular. The hottest month of the year is July, which has average highs of 89°F (32°C), and the summer is also the wettest time of year, with almost half of Prescott's annual rainfall occurring in July, August, and September. The coldest month of the year is usually January, with snow also falling at this time of year and running through to March.

One of the best reasons to visit Sedona is to simply walk around and appreciate the various historical sites and architecture. There are plenty of Victorian houses, along with Old West style buildings and saloons along Whiskey Row. Prescott is also home to the tallest house in all of North America, which is called Falcon Nest and has a height of 124 feet (38 m). There are also many live events and festivities in Prescott each and every year, including The World's Oldest Rodeo, which has been running since 1888, and various festivals for occasions like Easter, July 4th, and Cinco de Mayo.