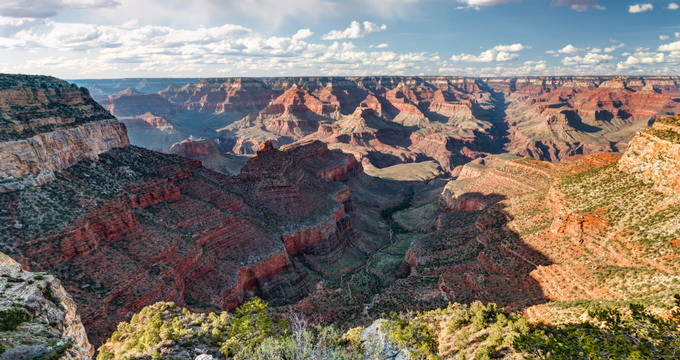 A true natural wonder of the world, the Grand Canyon is one of the most famous sites in all of North America. Located in the state of Arizona, the Grand Canyon runs for 277 miles (446 km) in length along the Colorado River and has a maximum width of around 18 miles (29 km), as well as a maximum depth of just over a mile (6,093 feet / 1,857 m). Historically inhabited by Native Americans, who created many settlements among the canyon, the Grand Canyon has been seen as a holy site for some people and an inspiration to others. CDC information for travelers. Hours/availability may have changed. 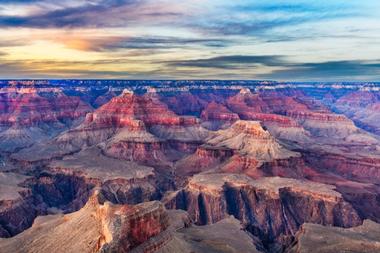 The Grand Canyon has an estimated age of between five and six million years and is one of the most visited natural sites in all of North America. The impressive beauty and overwhelming nature of the Grand Canyon have earned it a place as one of the world's must-see locations, with around five million visitors arriving at the Grand Canyon each year. Around 80% of those visitors are from the United States, but many more come from other countries all around the globe.

2.Elevation of the Grand Canyon 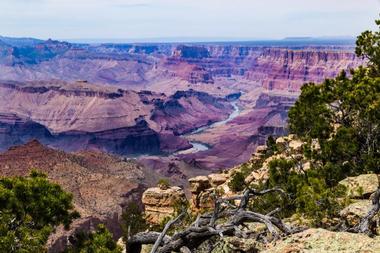 The vastly different elevations all around the Grand Canyon have a big impact on the local weather. The highest points have colder temperatures and can receive snowfall, for example, while the low areas down along the Colorado River tend to be warmer and drier. The average annual precipitation on the North Rim is much higher than the South Rim due partly to its higher elevation.

You are reading "Grand Canyon Elevation" Back to Top

The South Rim tends to be the most-visited part of the Grand Canyon and all sorts of activities can be enjoyed at this location. The simplest way to enjoy the Grand Canyon is to observe it from above, snapping photos and appreciating the beauty of this natural wonder of the world from an area like Lipan Point, not far from Grand Canyon Village. If you want to take a more active look at the Grand Canyon, it's possible to hike own to the canyon floor, but due to the distance and difficulty of this hike, it can take a full day to get all the way down.

Various campgrounds can also be found around the North and South rims for people who want to spend more than one day at the Grand Canyon. Rafting, running, cycling, and other activities can also be enjoyed at the Grand Canyon, with helicopter tours also being a fascinating and exciting way to see it from a thoroughly unique angle. Due to the high elevation of the Grand Canyon, it’s important for visitors to wrap up warm and remember that the air is colder and thinner at high altitudes along the North and South rims.

You are reading "Grand Canyon Elevation" Back to Top

You are reading "Grand Canyon Elevation " Back to Top

19 Best Things to Do in Bisbee, Arizona

20 Best Things to Do in Kingman, Arizona

20 Best Things to Do in Flagstaff, Arizona

22 Best Things to Do in Mesa, Arizona

21 Best Things to Do in Tempe, Arizona