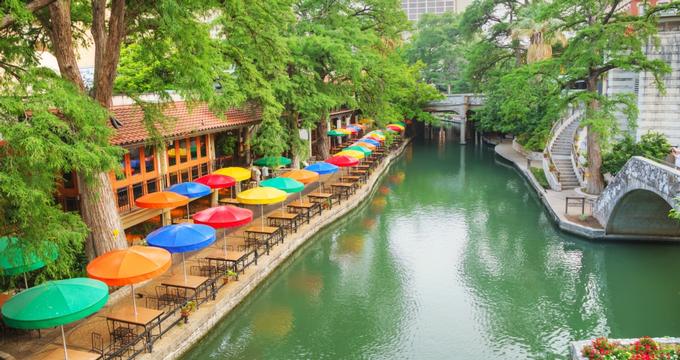 Located in San Antonio, Texas, the San Antonio River Walk, also referred to as the Paseo del Río, is a system of pedestrian walkways lining the banks of the San Antonio River. Situated one level down from automobile traffic, the River Walk connects many of the city’s major tourist destinations and is home to a vibrant network of shops, restaurants, bars, and public art installations.

The plan for the River Walk stems back to September 1921, when a flood along the San Antonio River claimed 50 lives and caused extensive damage to the area. Plans to control the river’s flooding were proposed, including the construction of an upstream dam, bypass channel, and storm sewer. While work on the dam began in 1926, protests of the sewer option caused the proposal of a new plan by architect Robert Hugman, which involved the integration of commercial development into a system of floodgates and smaller dams.

More Things to Do in San Antonio

The project was initially poorly received, with many public concerns expressed about incorporating public business activity into the area after the 1921 flood, but business and government funding support soon outweighed the flood risk concerns. Beginning in 1939, 17,000 feet of walkways, including 20 bridges, were constructed along the riverfront. A major 1496 flood stood as a first test for the burgeoning business district, but the completed Olmos Dam, along with the other bypass channels and floodgates, proved to be a successful protection system.

Subsequent expansions of the River Walk have connected many of San Antonio’s major tourist destinations, spanning a 15-mile stretch that includes five miles of the city’s downtown area. Starting just north of downtown and stretching south through the city’s historic mission district, the River Walk consists of two parallel sidewalks on either side of the river, providing striking views as it winds and loops under a number of bridges. The River Walk is divided into three main sections: the Museum Reach, the Downtown Reach, and the Mission Reach.

The Museum Reach, an expansion completed in 2009, is a 1.33-mile stretch of walkways connecting several major cultural attractions north of downtown. The River Walk begins at Brackenridge Park, a 343-acre public park which is home to the world-famous San Antonio Zoo and the Japanese Tea Garden. The renovated Pearl District, the former home of Pearl Brewery, has been transformed into a vibrant, hip district filled with unique restaurants and independent retailers. Three museums are located along this stretch of the walk: the Witte Museum, a science and natural history museum; the children’s science center DoSeum; and the San Antonio Museum of Art.

The Downtown Stretch is the River Walk’s most high-profile area, with a canopy of lush greenery covering a busy tourist district filled with shopping, dining, nightlife, and entertainment. Built for the 1968 World’s Fair, the iconic Tower of the Americas, a 750-foot observation tower with a lounge and revolving restaurant, rises over the River Walk skyline as part of HemisFair Park. A number of cultural attractions are accessible from this portion of the River Walk, including the Majestic Theater, San Antonio’s largest and oldest theater, and the La Villita Historic Arts Village, which is home to the Arneson River Theater riverfront performance venue. Also nearby is the popular Shops at Rivercenter mall, built around the grounds of the historic St. Joseph Catholic Church, is home to more than 100 stores, restaurants, and hotels. Visitors can explore the area on foot or travel along the water on the city’s famous flatbed riverboats.

As the city’s cultural hub, River Walk is home to many festivals and special events, including the annual summer arts festival Fiesta Noche del Rio, which presents music and dance performances along the riverfront from May through August. In November and December, the River Walk is vibrantly lit with a famous holiday light display, featuring more than 100,000 brightly-colored lights hung from the downtown stretch’s cypress trees and an annual Fiesta de las Luminarias illuminating the walk’s pathways. An annual floating holiday parade is held the day after Thanksgiving and is televised across America, syndicated to more than 200 stations nationwide.

Maintained as a public park, the River Walk is open 365 days a year and is free of charge to visitors. The pathways are open 24 hours a day, although businesses are individually maintained and individual attraction hours vary.

More Things to Do in San Antonio

Best Things to Do in Texas: Fort Worth Stockyards