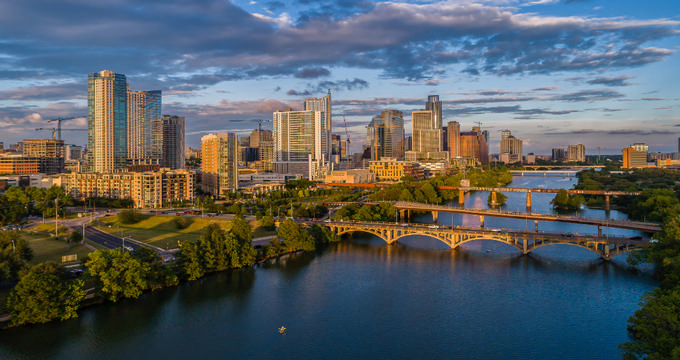 The seat of Travis County and the state capital of Texas, Austin is the 11th most populous city in the entire United States and is well-known for its stunning skyscape and beautiful Texas Hill Country location. The city of Austin is located relatively far inland and covers an area of just over 305 square miles, with more than 7 square miles of waterways to be found throughout the city. Austin has a population not far from 1 million people, over 2 million living in the surrounding metropolitan area.

The area on which the city was founded has been inhabited for thousands of years. At the time of colonization, the Native American Tonkawa tribe were living in the area. The town was originally called Waterloo. At the time, Houston was the capital of Texas, but then-Vice President Mirabeau B. Lamar visited the region and suggested that a new location be chosen. Waterloo was the ideal spot and it was renamed Austin in honor of Stephen F. Austin, also known as the 'Father of Texas'.

The new capital quickly began to grow, despite being right in the middle of various conflicts between Texas Rangers and Comanche Native Americans, as well as tensions with Mexico. Through the early 20th century, the city saw a lot of growth and quickly established itself as a commercial and cultural hub for the state of Texas. It may not be as large or populated as the likes of Houston or San Antonio, but it still has a lot to offer and is the home for the headquarters and major offices of various Fortune 500 companies, including globally-known names like Amazon, Intel, Dell, and Apple.

The elevation of any city is the term given to denote how high the location is in relation to sea level. Austin, Texas, has an elevation of 489 feet (149 m), which is typical of most major cities around the United States, many of which are situated at elevations of 500 feet (152 m) or less. For example, the three biggest cities in the United States – New York City and Los Angeles– have elevations of 33 feet (10 m) and 285 feet (87 m), respectively.

Texas isn’t one of the highest states in America in terms of elevation, but it isn’t one of the lowest either. It covers a very large area, with lots of different landscapes and terrain styles, meaning that the elevation in some parts of Texas can be very different to other areas. The mean elevation for the state is 1,700 feet (520 m), so the capital city of Austin is at a significantly lower elevation than the mean reading. Texas’ highest point is Guadalupe Peak, which has an elevation of 8,751 feet (2,667 m), while the lowest point is the waters of the Gulf of Mexico, which are technically at sea level.

3.Climate and Things to Do in Austin, Texas Due to Austin's unique location and surrounding ecological areas, it has quite a unique, variable climate that mixes together different factors from desert, wet, and tropical locations. It's officially classed as a humid subtropical climate with long, hot summers and short, relatively mild winters. Rain falls throughout the year in Austin, Texas, with the rainiest periods occurring in spring and fall. Temperatures reach their peak in August, with average highs of 97°F (36°C) and drop down to their lowest point in January, which has average lows of 42°F (5°C)

There are lots of things to do in Texas' state capital. The Capitol Building is a must-see landmark for any visitor to Austin, and the city is filled with lakes, pools, and green spaces. The Barton Springs Municipal Pool and Zilker Metropolitan Park are two very popular areas for recreational activities of all kinds. The city's nickname is 'Live Music Capital of the World' and Austin is very popular for country music shows and festivals. The South by Southwest media festival is also held in Austin, Texas each year and is mostly focused on films, but also includes awards and exhibits for other kinds of media like video games and interactive entertainment.

25 Best Free Things to Do in Houston, Texas Year Round

25 of the Largest Cities in Texas