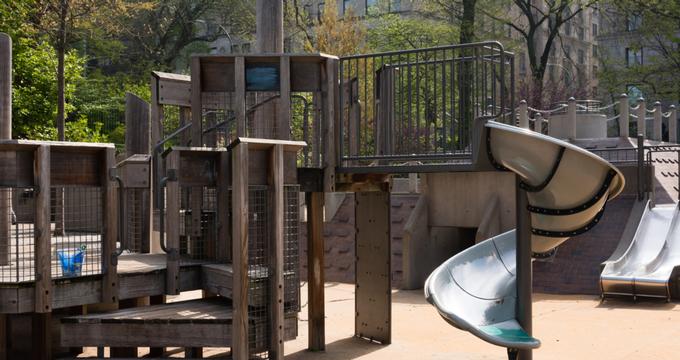 There are a total of 21 playgrounds found in New York City's Central Park, subdivided into four areas, namely the North and South Ends, the Center, and the Great Lawn. CDC information for travelers. Hours/availability may have changed. 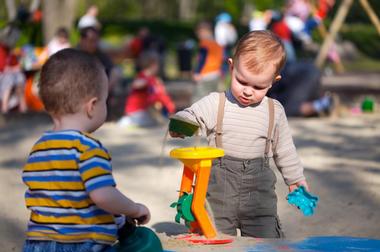 - East 11th Street Playground: This is Central Park’s northernmost playground. Rebuilt by the Conservancy back in 2013, this park was is frequented by school-age children. The place is made up of four circular sections, each having its distinct play space with swings, water features, and facilities for children with special needs.

- Bernard Family Playground: found across Harlem Meer, this playground is considered one of the most beautiful spots in Central Park. It has bucket swings, a huge play structure with sliding poles, bridges, and slides, and an enclosed sandbox. The park also has a number of platforms and a sprinkler. The park is mainly meant for younger children.

- Tarr Family Playground: this one’s west of 100th Street and is divided by a bridge across a huge patch of sand. There, you’ll find a water feature, a number of climbers, tunnels, slides, and a variety of swings for kids of different ages. There’s also a concrete maze.

- Robert Bendheim Playground: east of 100th Street is the playground dubbed as the “playground for all children.” The space was designed in a way that it was accessible to all kids, including those with disabilities. The space is also home to a play structure with ramps and water feature that’s handicap friendly.

- Rudin Family Playground: alongside 96th street is a playspace whose main attraction is a huge trellis that offers people shade. There’s also a sandbox, three play structures for climbing, and bucket and tire swings. There are also tables for chess and checkers, although they can also be used for picnicking. 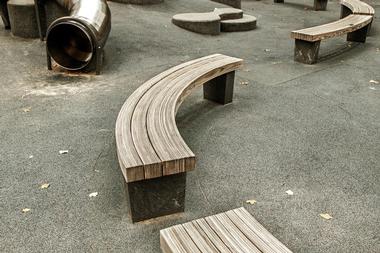 - E. 72nd Street Playground: this one just got reopened after an eight month long renovation. Since then, it’s featured push button fountains, a brand new sandbox, new slides, and a pyramid climber. The place has definitely become a playground for kids who are looking for adventure.

- Adventure Playground: The Conservancy had recently revamped this playspace, and has since had better infrastructure and accessibility. The changes preserved the park’s original playground features while adding new features for kids of all ages to enjoy. New paths have also been built and plants have been planted to beautify the place.

- Tarr-Coyne Tots Playground: This part of the park was part of the Conservancy’s Central Play Campaign. The playground features equipment meant for the Park’s younger visitors, such as the sprinkler, two sandboxes, swings, landforms, and sand tables. The place is ideal for toddlers to crawl, climb, and explore.

- Billy Johnson Playground: This playground happens to be the result of a competition to create a more rustic playground setting. The design includes a granite slide embedded on a rocky hill. It also features bucket swings and a mini-amphitheater. It can be found within the park at Fifth Avenue and 67th Street.

- Heckscher Playground: This is the oldest playground in the Park. More importantly, it’s the largest, spanning three acres. Like the other playgrounds, the place has slides, seesaws, and swings. But in addition to those, the playground also has a water fixture as well as a lot of giant rocks for kids to climb on. 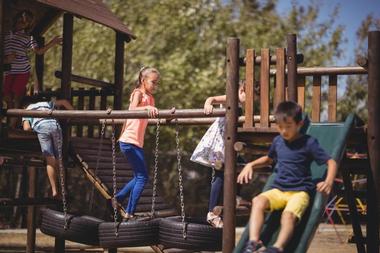 - E, 96th Street Playground: This is also one of the Park’s biggest playgrounds, found at the northeast of the Reservoir. The spot has an open space as well as a wide variety of equipment. It also features bridges, picnic tables, swings, climbing structures, and more.

- Tarr-Coyne Wild West Playground: As the name of the place suggests, this is a western-themed playground. It features wooden structures that give off a rustic vibe. The place can be found on 93rd Street. Since its reopening in 2015, the playground has been remade to have more space and accessibility.

- Safari Playground: This one is sitting on top of a hill by 91st Street at Central Park West. Because of its location, the playground feels very secluded and features a lot of space for children to run around. There are also hippo sculptures, tree houses, water spray features, and a canoe. 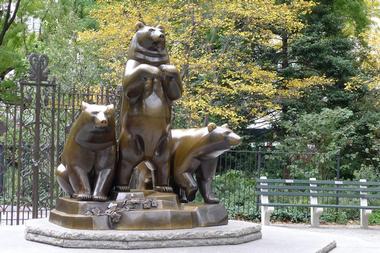 - Abraham and Joseph Spector Playground: Spector Playground is also one of the larger playspaces in the Park. It’s got a wide and open space for kids to run around in. The place is also riddled with oak trees, giving ample shade to the park’s visitors. There are also a lot of wooden and metal climbers that have slides, poles, bridges, etc. The playground also has ample sand patches as well as an enclosed sandbox.

- Arthur Ross Pinetum Playground: Found within the Arthur Ross Pinetum, the park is home to many pine trees. In fact, it’s got the most pine trees in the Park. The open setting allows for children and adults to roam around and explore or even have picnics on the open lawns.

- Ancient Playground: Don’t let the name fool you. The Ancient Playground is actually one of the Park’s newer play spaces. North of the Metropolitan Museum of Art, some of the playground’s equipment such as the climbing pyramids, sundial, and obelisk were inspired by the Museum’s Egyptian Art pieces.

- Mariner’s Playground: As the name suggests, this is a nautically themed playground. It’s found north of Summit Rock and has play structures, steering wheels, ladders, slides, and decks. The seahorse spring rockers and wooden boat sandbox add a nautical touch to the place.

- Diana Ross Playground: The playground was named after its donor, the famous singer, Diana Ross after she had a concert there in 1983. The playground is filled with interconnected play equipment, perfect for adventure-seeking kids.

- James Michael Levin Playground: This one is known for having a fountain which features characters from the classic Alice in Wonderland.

You are reading "20 Best Playgrounds in New York City's Central Park this Weekend with Friends" Back to Top or More places to see near me today, what to do, weekend trips

23 Best Things to Do in Dumbo, Brooklyn

25 Best Places to Visit in NYC on a Date

20 Best Things to Do in Chelsea, New York City