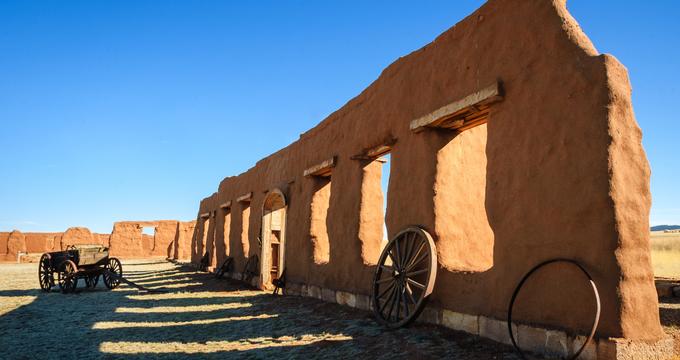 New Mexico’s Pueblo indigenous people cultures are known for their unique apartment-like dwelling villages constructed of adobe, which were often constructed on rock ledges or steep-sided mesas. Today, a large number of national parks, monuments, and heritage sites preserve the ruins historic indigenous villages and Spanish missions throughout the region. 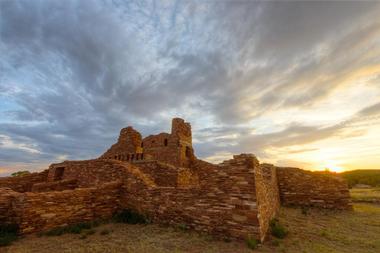 Abó Ruins are part of Salinas Pueblo Missions National Monument, which preserves a complex of three historic Spanish missions near the city of Mountainair. While use of the site is believed to date back to the 14th century as a major trading station, its first recorded use was in 1583, when it was visited by Spanish explorer Antonio de Espejo. In 1622, the site was designated for use as Mission of San Gregoiro de Abó, which was constructed seven years later and served a population of more than 1,600 Pueblo indigenous people at its peak. Today, the site features a visitor center showcasing museum exhibits and two educational trails offering access to important ruins. Ranger-led petroglyph tours are available with advance reservations. 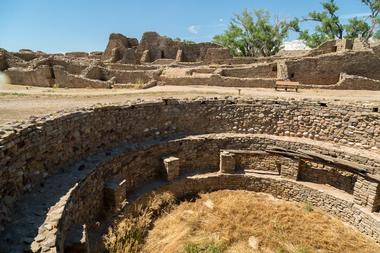 Aztec Ruins National Monument is located near the Animas River and the city of Farmington, approximately nine miles from the Salmon Ruins. The ruins date back as far as the 11th century and showcase Ancestral Puebloan structures. Their name is derived from their discovery in the 19th century by European settlers, who mistakenly believed they had found an ancient Aztec site. Today, the site is included as part of the Chaco Culture UNESCO World Heritage Site and is a stop on the Trail of the Ancients Scenic Byway. A visitor center is offered, along with a self-guided visitor educational trail touring site reconstructions, a heritage garden and native plants walk, and a pedestrian river bridge designated as part of the Old Spanish National Historic Trail. 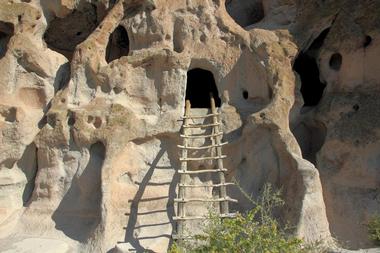 Bandelier National Monument preserves more than 33,000 acres of canyon and mesa terrain surrounding a former Ancestral Pueblo settlement that was inhabited between 1150 and 1550. Following droughts that exacerbated the lack of arable land in the region, the Pueblo moved to the Rio Grande region, where their descendants became known as the Cochiti Pueblo. Today, the monument preserves village site excavations and petroglyphs at Frijoles Canyon and Tsankawi, which are accessible via several self-guided nature trails. A visitor center offers exhibits and a short documentary film, and ranger-led programming provides further information in the form of walk and talk events, campfire gatherings, and night sky programs. Single and multi-day backcountry hiking permits are also available upon request. 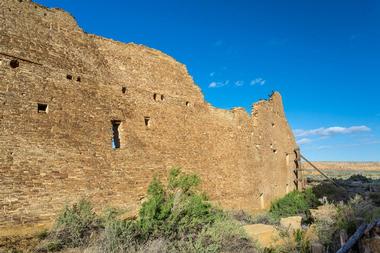 Chaco Culture National Historical Park preserves a major Ancestral Puebloan cultural center within Chaco Canyon that flourished between 850 and 1250. A large number of great houses were constructed throughout the ninth century, and by 1050, the site had become the central ceremonial and economic site of the San Juan Basin region. Though the exact purpose of many of its structures is not known, the site is viewed by modern Southwest indigenous people as an important spiritual site. The site was established as a National Historical Park in 1907, and in 2013, the park was designated as an International Dark Sky Park. A visitor center is offered, along with a self-guided Canyon Loop Drive trail showcasing six historic sites and four backcountry trails leading to more obscure sites. A campground and ranger-led astronomy, solar viewing, and walk and talk programming is also available. 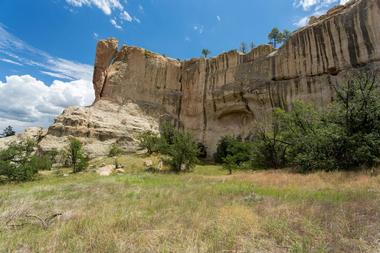 
El Morro National Monument preserves a historic watering hole that served as a campsite for Ancestral Puebloan, Spanish, and American travelers throughout the American Southwest. Petroglyphs and carvings at the monument highlight more than 2,000 signatures, messages, and dates marking travels. Today, the site offers a visitor center that showcases a 15-minute documentary and historical exhibits on the cultures of the Southwest. An Inscription Trail showcases the site’s carvings, while a two-mile Headland Trail provides access to the Ancestral Puebloan ruins of Atsinna, which were constructed in 1275 by ancestors of the Zuni indigenous people and stand high above the monument atop a nearby cuesta. 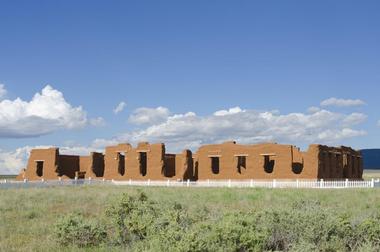 
Fort Union National Monument is located in Mora County near the city of Watrous and preserves the historic Fort Union, which was constructed in 1851 as the second of three forts that stood in the region. Ruins of the third fort are also preserved, along with a network of ruts from the Cimarron and Mountain portions of the former Santa Fe Trail. The National Monument, which was established in 1954, offers a visitor center with museum exhibits and a documentary film about the history of the Santa Fe Trail. 0.5 and 1.25-mile self-guided interpretive trails are available, showcasing the fort’s adobe ruins, and park interpretive programming is offered regularly, including guided talks and tours and night sky star parties. 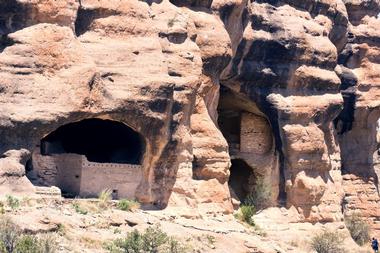 Gila Cliff Dwellings National Monument preserves the Mogollon cliff dwellings at the Gila Wilderness, located near the Gila River and Silver City. Two Mimbres Culture ruins sites, Cliff Dweller Canyon and TJ Ruins, are showcased throughout the monument, which also protects 553 acres of surrounding wilderness. The park was established in 1907 following the ruins’ discovery in 1878 by Silver City resident Henry B. Ailman. A museum showcasing Apache and Mogollon artifacts is offered at the park’s visitor center, along with a mile-long trail loop providing visitor access to the ruins. A mummified infant body discovered at the site, known as Zeke, is also on display at the Smithsonian Museum. 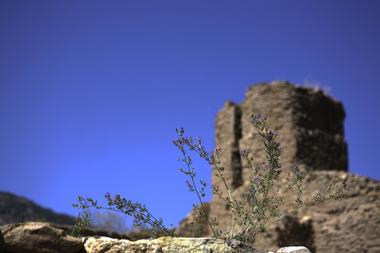 Jemez Historic Site is located near the cities of Albuquerque and Bernalillo and preserves the stone ruins of the Jemez Pueblo village of Giusewa, which dates back at least 500 years and was named in honor of the region’s hot springs. The remains of the short-lived San José de los Jemez Spanish Catholic mission, which was constructed in 1621, are also preserved at the site. Though the church was abandoned in 1640, its remains are noted for their massive size, unique octagonal bell tower, and colorful frescos. A heritage center at the site showcases the history of the Jemez people through a variety of exhibits, while a 1,400-foot interpretive trail offers access to the site’s ruins. 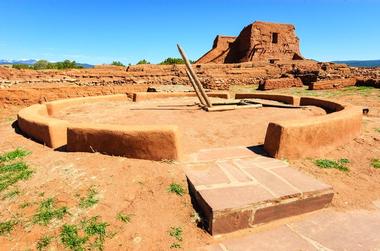 Pecos National Historical Park is located within San Miguel and Santa Fe Counties, approximately 17 miles east of the city of Santa Fe. It protects an area of more than 6,600 acres of historical significance, including the ruins of the Pecos Pueblo village, which housed more than 2,000 people at its peak in 1450. The 17th-century Spanish Catholic Mission Nuestra Señora de los Ángeles de Porciúncula de los Pecos is also preserved, and both sites are accessible via a 1.25-mile self-guided interpretive trail. Other sites preserved include the 1920s-era Forked Lightning Ranch, the Civil War-era Glorieta Pass Battlefield, and portions of the Old Santa Fe Trail. 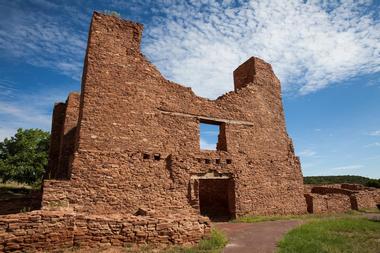 Quarai Mission Ruins, which are also referred to as Quarai State Monument, are incorporated as part of the larger Salinas Pueblo Missions National Monument, which preserves three historic mission ruin sites near Mountainair. The site was designated as a National Historic Landmark in 1962 and preserves the archaeological remains of a Quarai Pueblo settlement that is believed to have been constructed around 1300. By the arrival of European settlers in the area, large pueblo compounds had been constructed at the site, which are visible as ruins today. The site also preserves the Nuestra Senora de la Purisima Concepcion de Quarai Spanish Catholic mission, which was constructed in 1632 and abandoned in 1675 following attacks by Aztec groups. 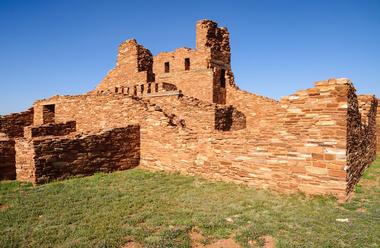 Salinas Pueblo Missions National Monument preserves three historic Spanish Catholic missions that were constructed in the Mountainair region between 1622 and 1635. It was established in 1909 as Gran Quivira National Monument to preserve the ruins of the historic Gran Quivira mission, one of the most celebrated mission ruin sites in the American Southwest and the largest Christian church ruin site in the United States. Today, the park’s Abó unit also preserves the Mission of San Gregoiro de Abó, while its Quarai unit centers on the Nuestra Senora de la Purisima Concepcion de Quarai mission. Several visitor centers and interpretive trails are offered throughout the park, providing historical context and access to ruin sites. 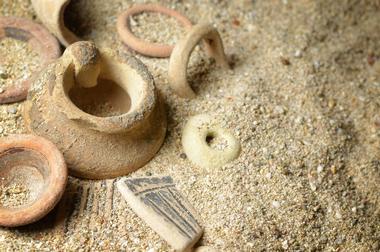 Salmon Ruins Museum preserves an important Chacoan and Pueblo archaeological site that was constructed around 1090 and occupied until the 1280s, when it was severely damaged by fire. It is located along the banks of the San Juan River near the city of Bloomfield and was excavated as part of a series of archaeological efforts in the 1970s supported by Eastern New Mexico University and the San Juan County Museum Association. Today, the Salmon Ruins Museum showcases a variety of permanent and temporary rotating exhibits related to Chacoan and Pueblo culture, including important artifacts discovered as part of excavations. A heritage park also showcases replica indigenous dwellings, sweat lodges, and trading posts, and an amphitheater is available for private special event rental.

Free things to do near me known for tourists & historical must see attractions for adults in April, May, June, July, August 2020, January, February, March, restaurants that deliver: UT, WV

25 Best Things to Do in Las Cruces, New Mexico