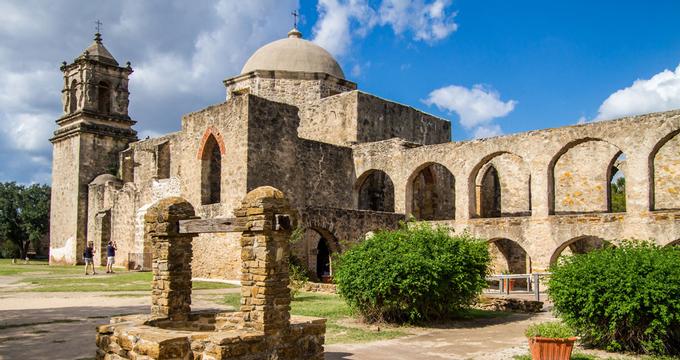 The San Antonio Missions in San Antonio, Texas consist of four 18th century churches and grounds that began as an outreach of the Kingdom of Spain and the Catholic Church. Supervised by the National Park Service, the mission churches still have religious services and are a vibrant part of the parochial life of the Archdiocese of San Antonio.

Visitors to the missions have a unique opportunity to view not just historical buildings, but also artifacts of an important period in Texan history and in the history of the Catholic Church. Tourists may attend mass or simply enjoy the beauty of the churches and the abundant wildlife that lives on the mission grounds.

In the late 17th and early 18th centuries, Franciscan Fathers from Spain and Mexico traveled to Texas, then part of New Spain, to minister to the needs of the Native American people and to spread their religious message. The missions, in addition to serving as religious centers, also became economic trade hubs and were widely involved in agricultural production and the ranching of cattle and other livestock. All four of these missions were home to priests, soldiers, and native people who had converted to Christianity and who served the church with farm work or by learning a trade. In 1824, the mission system was abandoned, as the church could no longer fulfill its role due to the increasing demand of ranchers and other business interests regarding the control of the church’s lands.

Before the mission system ended in 1824, the missions played a crucial role not just in religion, trade, and agriculture, but also as strong community centers and places of refuge. Throughout the 18th century, the people of south Texas battled such ills as disease, drought, flooding, and Apache raids from the north, and the missions became safe places offering shelter and medicine. Those people who called upon the missions for sanctuary were required to become subjects of the Spanish king and needed to convert from tribal religions to the Catholic faith. Certain attractions may be temporarily closed or require advance reservations. Hours/availability may have changed. 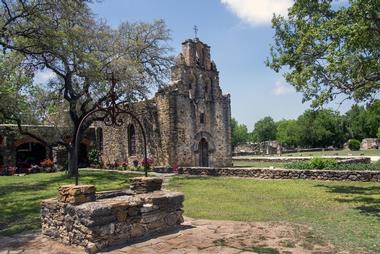 Mission Espada is the oldest and the southernmost of the four San Antonio Missions. Properly called San Francisco de La Espada, the mission broke ground in 1690, and held its first mass in June of that year. The mission was a remote one, but well placed for maximum agricultural benefit on the shores of the San Antonio River. It made use of the materials of the French fort and settlement of Saint Louis, which had been abandoned several years earlier. The Franciscan Fathers who served at Espada worked with the Caddo people, who showed an interest in Christianity.

The first three years of Mission Espada’s existence were extremely difficult. It was plagued first by flooding, and then drought, and finally with an epidemic that killed more than half of the Native American people in the surrounding area. The Hasinai people suspected that the conversion to Christianity, and by extension the Franciscan Fathers, were responsible for the spread of the disease. Fearing attack, the friars bolted from the mission, burying its bell and setting fire to the buildings, finally retreating to the safety of Mexico. Mission Escada lay abandoned until 1716, at which point it was rebuilt and restored as a religious house.

Mission Espada was the center of craftsmanship for the missions in the region, and Native peoples who lived and worked at the mission were taught trades such as carpentry, masonry, and stone cutting. It is the only one of the missions to have made bricks, and original brickwork can still be seen there today. 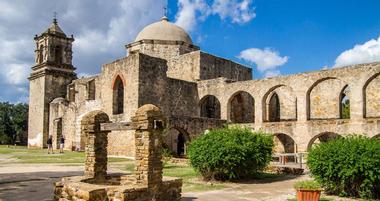 Mission San José was established in 1720. Its full name is Mission San José y San Miguel de Aguayo. It was founded by friar Antonio de Jesús, and under his leadership, the mission, famed for its beauty, became a major social center for the religious order. The mission was built with a specific purpose: many of the missions in East Texas had closed, and the Coahuiltecan Indians who lived in them fled to Mission San Antonio de Valero, which could not hold the number of refugees who knocked on their doors.

Mission San Juan, which dates to 1731, was the center for the agricultural work of the missions. Its rich earth, large orchards, and vast pastures provided the San Antonio missions with produce and animal products. Peaches, peppers, corn, grapes, pumpkins, sweet potatoes, beans, and squash were all grown at the mission. A count made of livestock in 1762 enumerated the mission’s herds at 3,500 sheep and 3,000 cows. Franciscan Fathers and the soldiers who guarded the mission lived in the stone mission buildings, while the two hundred resident Native peoples lived in adobe structures along the mission’s walls. Despite the presence of soldiers, Mission San Juan frequently fell victim to raids by the Apache.

Mission Concepción’s full name is Mission of Nuestra Señora de la Purisma Concepción. It was the center of religious activity of the San Antonio missions and was founded in 1716. The current church building was completed in 1755. The church is the oldest unrestored stone church in the United States, and is built in the shape of a cross with walls 45 inches thick. Abandoned in 1794, the church was used as a cattle barn until 1855, when it was given to the Brothers of Mary, who cleaned it up and began church services there once again.

You are reading "Places to Visit in San Antonio: San Antonio Missions" Back to Top 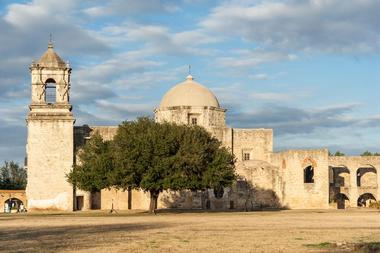 The San Antonio Missions draw bird watchers and animal lovers due to the rich wildlife proliferating on mission grounds. Over two hundred bird species live in the lands around the missions, including migratory songbirds, Green Kingfishers, Multicolored Herons, the Scissor Tailed Flycatcher, and the Crested Caracara. A vast array of reptiles and animals live on the mission properties, and visitors will often come face to face with armadillos, deer, lizards, frogs, and toads.

Back to: Best Things to Do in San Antonio, TX.

You are reading "Places to Visit in San Antonio: San Antonio Missions" Back to Top

You are reading "Places to Visit in San Antonio: San Antonio Missions " Back to Top