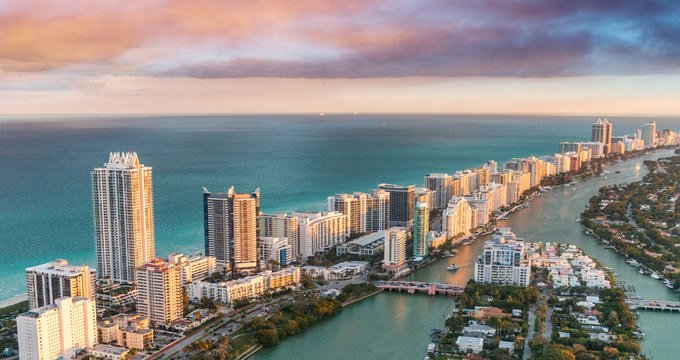 One of the major cultural and commercial hubs of Florida, Miami is the biggest city in the southern half of the state and the county seat of Miami-Dade County, the most populous county in all of Florida. Located on the Atlantic Coast of the Sunshine State, Miami covers an area of around 56 square miles and has an estimated population of over 460,000 people, with more than 6 million in the surrounding metropolitan area, making it the seventh most populous metropolis in the United States. CDC information for travelers. Hours/availability may have changed. 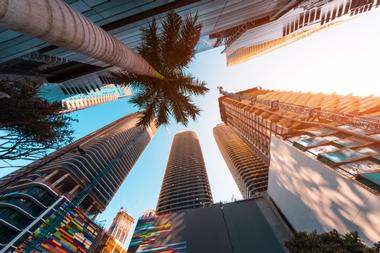 Various Native American tribes lived around the Miami area for several millennia before European settlers arrived. The area was claimed by Spain back in 1566, with Spain and Great Britain holding control of Florida until it eventually became part of the independent United States. Miami is generally classed as the only major American city that was founded by a woman. Julia DeForest Tuttle owned the land on which Miami was built and was known as the "Mother of Miami" for her contributions to the city's development.

Miami was incorporated in 1896 and was very small at the time, but rapidly grew into a major city due to its hot climate, beautiful beaches, ideal import/export location, Latin American immigration, and various other factors. Nowadays, Miami is a city known far and wide. It has appeared in many TV shows and films, with its stunning skyline and sunny weather attracting many residents and visitors each year. All sorts of activities can be enjoyed in and around Miami, with the city boasting a thriving nightlife, dozens of outdoor activities, and some of the best beaches in the Sunshine State. 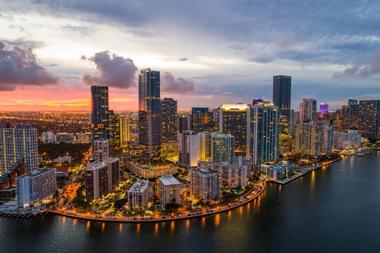 The elevation of a city tells us how high or low it is in relation to sea level. Many major cities around the United States, like Miami, are situated in coastal locations, so tend to have relatively low elevations of less than 500 feet (152 m). Miami's elevation is just 6 feet (2 m), with its highest point reaching 42 feet (13 m). This is in line with much of the rest of Florida, which is the third lowest state of all in terms of mean elevation. Only Delaware and Louisiana have lower mean elevations than Florida, which records a rating of just 100 feet (30 m) in this statistic.

Florida also has the unique distinction of being the flattest state of all, with the smallest difference between its highest and lowest points. The highest point in the entire state of Florida is Britton Hill, a relatively small high in Walton County on the Panhandle, which has an elevation of 345 feet (105 m). The state of Florida’s lowest point is the waters of the Atlantic Ocean and Gulf of Mexico, which are at sea level. Due to the fact that Florida has such a long coastline and is generally very flat, without any big mountain ranges or high areas, most of its towns and cities have low elevations.

You are reading "Miami Elevation" Back to Top

3.Climate and Things to Do in Miami (Miami Elevation) 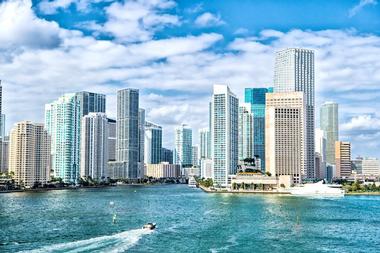 The city of Miami is well-known for its huge amount of sunshine and immensely warm weather. Miami has a tropical monsoon climate, with its low elevation, latitude, and proximity to the ocean playing key roles in its typical weather. Temperatures are high all year long. Even in the coldest months of the year like December and January, temperatures can reach highs of 78°F (26°C) very easily, with those temperatures rising up to 95°F (35°C) and beyond in the hottest months like July and August.

As one of the major cities in one of the most touristic states of them all, there's naturally a lot to do in Miami. The city is famous for its nightlife, boasting a lot of clubs, bars, and other locations for friends and families to hang out in the evenings. In the daytime, the beaches are often crowded with sunbathing tourists and the Atlantic Ocean waters are great for sailing, fishing, surfing, and more.

You are reading "Miami Elevation" Back to Top

Located on the heart of Downtown Miami , the soaring marble of the historic Alfred I. du Pont Building is one of the city’s most famous national historic landmarks and provides distinctive venues for special celebrations from wedding ceremonies and receptions to social galas. An integral part of Miami's history, the magnificent building was built like a bank vault in the 1930s, went onto to serve as the headquarters to the 7th Naval fleet in World War II and survived Great Depression to become one of the city’s most recognized and iconic structures. Beautifully restored to its former glory, both inside and out, the spectacular beauty now hosts exclusive, and history-making events in what is one of the country's most sought-after venues.

Exuding a timeless grace and charm, the beautifully preserved the Art Deco skyscraper features over 22,000 square feet of flexible event space comprised of two elegant ballrooms, each with 30-foot beamed and hand-painted wooden ceilings, Tennessee marble floors, and a built-in private bar set behind an original hand-wrought bank teller window dating back to the 1930s. The North Ballroom can accommodate up to 150 guests for seated dinners and features a unique stage for bands, DJs or speeches, while the South Ballroom can host up to 550 people for seated dinners or gala balls.

The Alfred I. du Pont Building features over 22,000 square feet of flexible event space comprised of two elegant ballrooms, namely the North Ballroom and the South Ballroom. The North Ballroom is 6,500 square feet in size with distinct features such as an original iron-wrought bank teller window, a unique, elevated stage set over the former security vault boasting a 50,000-pound door, and a dance floor in the original bank vault. The North Ballroom can accommodate up to 150 guests for dinner and dancing in this one-of-a-kind space.

The South Ballroom 6,500 square feet of spectacular open-plan space with luxurious marble flooring and breathtaking city views of the Miami skyline from several large windows. The Ballroom can be transformed into a magical venue with personalized décor and lighting and can accommodate up to 550 people for dinner and dancing or cocktail receptions.

Services included with the rental of one of the Ballrooms include a professional event manager to take care of all the details on the day of the event, security for the duration of the event, a fully equipped kitchen for food prep only, and janitorial and technical staff on site. There is public or valet parking available for an additional fee. Guests are required to use their vendors for services such as catering, libations, entertainment and music, floral arrangements, décor and furniture, photography and videography.

The iconic Alfred I. du Pont Building is located at 169 East Flagler Street in Miami, is wheelchair accessible and offers public or valet parking for an additional fee.

Fantastic year-round weather, beautiful beaches, luxurious hotels, a vibrant nightlife and myriad activities to enjoy for the whole family, Miami is one of America’s most famous vacation destinations. Located at the south-eastern tip of Florida, Miami boasts some of the world’s most exquisite beaches –sparkling warm waters lapping long, white stretches of white sand and filled with beautiful people sunbathing, surfing, strolling, and rollerskating – without a doubt, Miami will leave nothing but lasting memories.

You are reading "Miami Elevation " Back to Top

The Curtiss Mansion & Gardens is a magnificent estate built in the Pueblo-Mission Revival style that offers a beautiful venue for special occasions, events, and functions. Once owned by aviation pioneer Glenn Hammond Curtiss, who was known as the ‘Father of Aviation,’ the centerpiece of the property is a stunning 15,000-square-foot mansion that captures the spirit of 1920s Florida. Beautifully restored to its original splendor, the estate boasts a rich history and distinctive architectural details and is listed on the National Register of Historic Places.

Several versatile spaces are available for both intimate and large indoor, outdoor and courtyard ceremonies and receptions for up to 350 guests, including lushly landscaped gardens and grounds around the mansion. The Curtiss Mansion & Gardens also provide a range of premium services such as award-winning catering, professional event planning and management, and preferred vendor lists. The Curtiss Mansion & Gardens is located in Miami Springs and is within easy access to several attractions such as the Foxwoods Casino, Domino Park, and the Orange Bowl Stadium.

The 15,000-square-foot Curtiss Mansion & Gardens features several versatile spaces that can be rented for a variety of events, ranging from intimate ceremonies to lavish receptions. Ceremonies and private services can be arranged in one of three beautiful locations, including beneath a lovely stone archway, in a lush, shaded grove, and in front of a beautiful bridge for up to 250 guests. Elegant and glamorous receptions can follow ceremonies for up to 350 guests in stylishly appointed and decorated indoor and outdoor venues, or in the pretty courtyard beneath the stars.

Services offered in the rental of one of the venues at theCurtiss Mansion & Gardens include a beautifully appointed bridal suite and dressing area, a groom’s dressing area, a ceremony arch, a fully equipped kitchen for prep only, a dance area, and an event planner to take care of every detail on the day of the event. Also included are set-up and clean-up of the venue, private and secure parking in a large parking lot, and a list of preferred vendors for catering and beverages, tables, chairs, and décor, floral arrangements, wedding cakes, photography, and videography. The venue is wheelchair accessible and offers high-speed wireless Internet connectivity.

The Curtiss Mansion & Gardens is located at 500 Deer Run in Miami Springs and offers private and secure parking in a large parking lot. Located in Miami-Dade County, Miami Springs was founded by Glenn Hammond Curtiss, the ‘Father of Aviation,’ who also built and owned the Curtiss Mansion & Gardens. The estate is within several attractions and activities, including the Foxwoods Casino, the Miami International Merchandise Mart, the Hialeah Race Track, Coral Gables, the Orange Bowl Stadium, Little Havana, Domino Park, and the Miami Design Center.

You are reading "Miami Elevation " Back to Top

14 Best Things to Do in Cape Canaveral, Florida

18 Best Things to Do in Clearwater, Florida