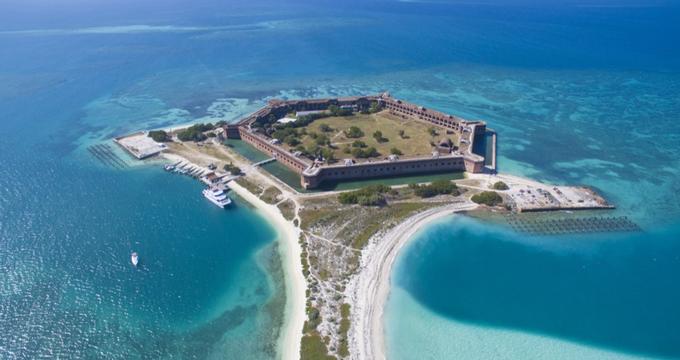 Key West is one of the best places to visit in Florida. Situated right at the end of US Route 1, this city is part of the Florida Keys and is actually the southernmost point in the entire continental United States. It's a lovely place to explore with lots of relaxed bars, charming boutiques, popular restaurants, and beautiful beaches too. It's a great spot for sunbathing, snorkeling, scuba diving, boating, fishing, and more, and it's also a prime location to plan day trips to other nearby locations like the Dry Tortugas. 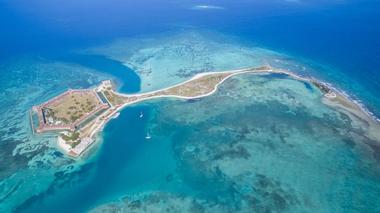 A small group of islands located out in the Gulf of Mexico, the Dry Tortugas are some 67 miles away from Key West. First discovered by Europeans back in the early 16th century, the Dry Tortugas islands make up Dry Tortugas National Park, home to all kinds of flora and fauna, and especially lots of sea turtles, which is what they were named after. The Dry Tortugas are popular spots with nature enthusiasts, and you can do a lot of wildlife spotting around these little islands. Here’s how to play your Dry Tortugas day trip.

Getting To The Dry Tortugas From Key West

2.Getting To The Dry Tortugas From Key West By Ferry 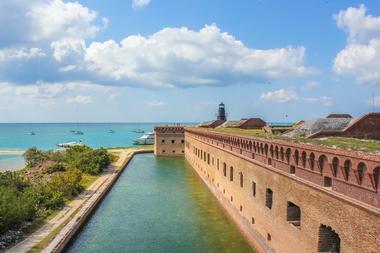 The Dry Tortugas are only accessible by boat or plane from Key West, with many visitors preferring the first option for its comfort and affordability. A journey on board the Dry Tortugas National Park Ferry takes around two to two and a half hours in total to reach the islands.

Next read: Best Things to Do in the Florida Keys

3.Getting To The Dry Tortugas From Key West By Seaplane 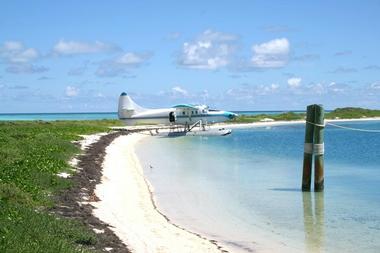 Perhaps you suffer from seasickness or maybe you just prefer to fly rather than sail. Either way, if you’re planning a day trip to the Dry Tortugas, you can also choose to travel by seaplane. Various tour companies and travel operators run seaplane tours from Key West to the Dry Tortugas.

The biggest advantage of traveling by seaplane is speed. The whole journey from Key West to the islands can be completed in under an hour, so you’ll be able to get there and back a lot faster than you would on board the ferry. Plus, you also get the added advantage of being able to see the islands from above and take some stunning photographs.

4.Important Information And Things To Do At The Dry Tortugas 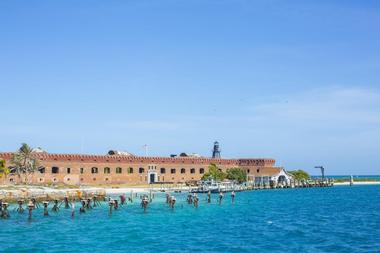 - The Best Time To Visit The Dry Tortugas - If you're hesitating about when exactly to plan your trip to the Dry Tortugas, it's important to know that the Dry Tortugas National Park features a subtropical climate, meaning that it has two identifiable seasons: a winter season that typically lasts from December through to April, and a summer season for the remainder of the year. During the winter season, the seas and winds can be quite rough, making it a little harder to get to the islands. In the summer, meanwhile, the islands will be busier and more crowded, but the weather and waves will be calmer. However, storms and hurricanes are more likely in summer.

- Wildlife Watching - One of the best activities at the Dry Tortugas is wildlife watching. The national park is home to so many sea turtles, sea birds, and countless fish and aquatic animals too, so there's plenty to see both on dry land and down beneath the water's surface. If you do want to do some wildlife watching, pay attention to the weather forecast and be sure to choose a day when the waters are expected to be calm and the skies clear. If you specifically want to see the sea turtles, visit during the summer months to see them nesting on the beaches.

- Fort Jefferson - Fort Jefferson is only man-made landmarks at the Dry Tortugas, and it's quite a sight. This coastal fortress is actually the biggest brick masonry structure in all of the Americas, with over 16 million bricks being used to build it. Construction never actually finished on this fort, but it's got some interesting history behind it and is a popular spot with tourists and visitors to the islands. You can get guided tours of Fort Jefferson, and there's also a museum and a book store located on-site.

25 Best Places to Visit in Florida

25 Best Things to Do in South Florida