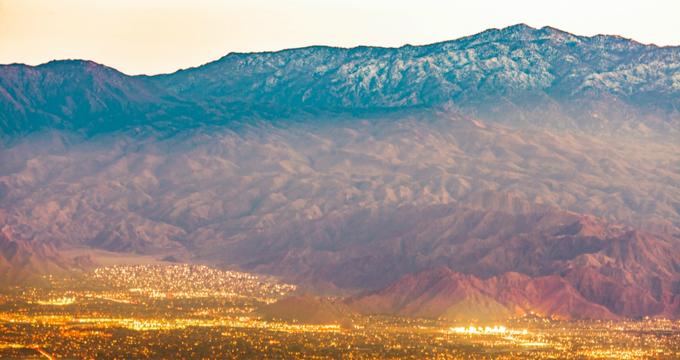 Mount San Jacinto is one of the tallest mountain ranges in southern California and just a few hours outside of Los Angeles and San Diego offering many opportunities for exploration of subalpine forests, granite peaks and mountain meadows in a wilderness area with campgrounds and hiking trails.

Mount San Jacinto State Park is 14,000 acres of subalpine forests and meadows in the San Jacinto Mountain Range, just south of the Sierra Nevada Range in Southern California. The San Jacinto Peak is 11,000 feet above sea level and is the second tallest in the region with several other peaks in the range that reach nearly as high. The average summertime temperature tends to stay in the mid 70’s with temperatures reaching as high as the 90’s. The park is accessible from Highway 243 at Idyllwild or by tram from Palm Springs, California.

Cahuilla Native Americans were the first people to use the area and evidence of their use of the mountains for hunting can still be seen through bedrock mortars and trails. The land was designated as a forest preserve in 1897 by President Grover Cleveland and became the San Jacinto Ranger District of San Bernardino National Forest in 1930. In the following few years 12,695 acres were set aside to become part of the San Jacinto state park and was opened to the public in 1937 with an aerial tramway being added in1945 but not completed until some time later in 1963. In 2000, the park integrated with the Santa Rosa and San Jacinto Mountain National Monument.

A major fault line is below the San Jacinto Mountains and the area is seismically active, causing the area to rise in elevation slowly over time. 255 acres of the wilderness area was named Hidden Divide Natural Preserve in 2002 which gave the area a distinct classification and the highest possible level of environmental protection possible under the law.

Park office hours are Saturday and Sundays 8am-4pm and Monday through Friday 10am-4pm. California State Parks requires users to pay a fee to use the parks. Passes can be a acquired for day use or yearly passes as well as boat and watercraft passes, wilderness permits, and camping permits through the parks office. Parking, picnic areas and restrooms are all handicap accessible at the park. Activities that families can enjoy while visiting Mount San Jacinto include horseback riding, geocaching, hiking, camping, wildlife viewing, photography, picnicking, and museums.

Hike-In Camping- There are 2 wilderness areas available for Hike-In Camping which requires a wilderness permit. The wilderness permit is obtainable through the California State Parks or USFS. These permits will allow you access to all hike through areas within US Forest Service boundaries which includes two other locations within the San Bernardino Mountains also.

Hiking- Day hikers must have wilderness permits that can be obtained from the ranger stations. The trails system is designed to be minimum impact on the environment. Most trails are moderate to strenuous and start in Idyllwild or the tram mountain station. The most popular trail range from 4-12 miles.

Palm Spring Aerial Tramway- The tram starts in the Chino Canyon and runs visitors from Valley Station to Mountain Station. This aerial tram travel from 2,643 feet elevation to 8,516 feet. At Mountain Station on San Jacinto Mountain visitors will find a restaurant, gift shop, and visitor center with a snack bar. Just a short distance from the Mountain Station, visitors will find the ranger station and San Jacinto Park with a picnic area, restroom, ski lift, nature trails, and panoramic views of the high country and Coachella Valley with peaks reaching heights over 10,000 feet in elevation.

Pacific Crest Trail- This trail is one of the most scenic trails in America with a lot of history behind it as well. This trail leads 2,650 miles from Mexico to Canada with a stretch through the San Jacinto range. This trail was built by volunteers and community partners with a goal of creating a backcountry experience and is managed by the Pacific Crest Trail Association, US Forest Service, National Park Service, Bureau of Land Management and California State Parks.