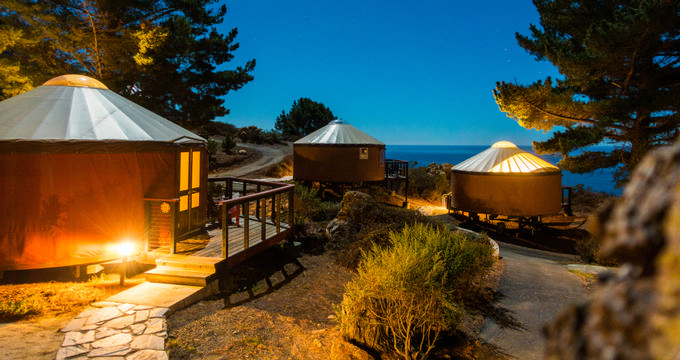 Glamping is a relatively recent addition to the dictionary that was created by combining the ideas of ‘camping’ and ‘glamor’ to create a different style of vacation, bringing together the luxuries and comforts of modern life and the adventurous expeditions and activities of camping. Before the recent popularity of glamping, travelers were forced to choose from staying in hotels or packing their own tents for private camping trips, but glamping has changed the game. Glamping locations can be found all around the world and often feature all kinds of accommodation from yurts and cabins to renovated wagons and trailers, and will usually come along with the sorts of furnishings and services you would normally expect of a good quality hotel like cozy beds, water, electricity, internet access, and more. CDC information for travelers. Hours/availability may have changed. 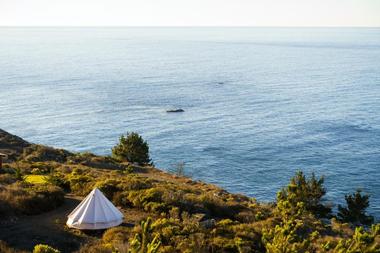 Northern California, often abbreviated to NorCal, is a beautiful part of the world. Southern California has a lot to offer as well, but the northern half of the state is home to some California's most iconic natural areas, as well as including the hugely popular city of San Francisco and its unique landmarks like the Golden Gate Bridge. This part of California includes Wine County, the capital city of Sacramento, the Muir Woods National Monument, Lake Tahoe, endless redwood forests, the Sierra Nevada mountains, the breathtaking Central Valley, and so much more.

With so much to see and so many beautiful locations to discover, Northern California is a prime spot for glamping. This type of vacation is very popular in California in general, so there are a lot of great glamping spots to be found all around the state. Whether you’re looking to stop in safari tents, yurts, cabins, lodges, or something else altogether, you’ll find great options all around the northern part of the state. These glamping accommodations provide you with all the amenities and furnishings you need to have a wonderful, relaxing time while also getting away from it all and getting in touch with nature. 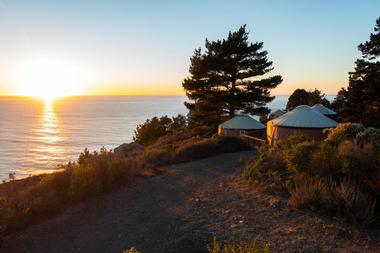 With so many different glamping spots to choose from, Northern California is a paradise for glamping enthusiasts. Let’s take a closer look at some of the best glamping spots in this beautiful part of the country.

Located just a little drive outside of Yosemite National Park in the Kings Canyon National Park, Sequoia High Sierra Camp is the ultimate glamping spot in NorCal for outdoor and nature enthusiasts. There are so many landscapes to enjoy and activities to partake in at this location, and the camp offers tent cabins that are fitted with either king or twin beds depending on your preference. Elegant rugs and decorations fill out the cabins, giving them a homely, welcoming feel, and the camp also offers a lot of great food including five-course dinners and picnic buffets.

If you love animals or plan on going glamping with kids, Safari West is one of the best places to be. This location is a huge wildlife preserve with over 1,000 animals to admire, including exotic African species like giraffes and zebras. Spending the night at a place like this is a once-in-a-lifetime opportunity you won't want to miss out on. Safari West offers a variety of tent cabins at great rates with continental breakfast included with every reservation. You can also add on different activities like safari tours to really make the most of your stay.

If you just want to get away from the stresses and worries of city life and relax in a tranquil environment, Costanoa is the place to be. Situated south of San Francisco on the Pacific Coast, Costanoa goes above and beyond to make your stay memorable, offering wine-tasting, horseback riding, massages, spa treatments, gourmet cuisine, and so much more. Guests can choose from a variety of accommodations including lodges, cabins, and tents.

Situated south of San Francisco, almost at the halfway point of California, Treebones Resort is the perfect place to do some coastal glamping in California. Featuring a beautiful array of yurts, each offering unbelievable views of the Pacific Ocean, this must-visit glamping spot will give you memories to last a lifetime. Nearby Sand Dollar Beach and Mill Creek offer all kinds of recreational opportunities, and the site itself runs campfires, restaurant food, and even its own sushi bar.

All About Sequoia and Kings Canyon National Parks

Sequoia National Park was the second national park created in the United States, established with legislation signed in September of 1890 by President Benjamin Harrison and designed to protect the giant sequoia trees of the Sierra Nevada range from devastation by the logging industry. Troops of the United States Cavalry Army oversaw protection of the park between 1891 and 1913, when the park’s first civilian administrator was appointed. Three years later, the park was transferred to the care of the National Park Service after its creation. Though early access to the park was only available through primitive roads, the construction of the Generals Highway in 1926 made the park accessible to a wider visitorship, and a number of backcountry trails and visitor amenities were created within the park in the following decades.

Today, Sequoia and Kings Canyon National Parks encompass more than 1,353 square miles within California’s southern Sierra Nevada region, with more than 97% of the parks maintained as designated wilderness areas. More than 1.5 million visitors attend the joint parks every year, which are located near California’s San Joaquin Valley and strive to protect the region’s historic sequoia trees and other natural features for generations to come. The park’s elevation ranges from heights of 1,370 feet to 14,494 feet, and its landscape varies between mountainous areas, undeveloped foothills, canyons, caverns, and forest regions. Notable natural features within the park include the General Sherman Tree, the largest-known tree in the world which stands at a height of over 275 feet tall. The parks are also home to the underground Crystal Cave, which features notable rock formations, the granite Moro Rock dome, which offers panoramic views of the surrounding natural areas, and the Tunnel Tree, a toppled great sequoia tree carved to accommodate a visitor road.

Five visitor centers and museums are offered throughout the park, including the Foothills Visitor Center, which is located within the park’s Foothills visitor unit near the Kaweah River. Outdoor exhibits are featured, along with trailheads for a variety of hiking trails through the region’s biologically diverse natural features. Within the Giant Forest unit of the park, which is home to some of the region’s finest examples of giant sequoia trees, the Giant Forest Museum offers a variety of year-round museum exhibits. Several hiking trails are also offered within the unit, including the Big Trees Trail and the Moro Rock-Crescent Meadow Road. The Lodgepole Visitor Center, located within the wildlife-heavy Lodgepole unit, offers daily showings of the orientation film Bears of the Sierra.

The Grant Grove unit of the park, which encompasses the former territory of General Grant National Park, offers a variety of day hiking opportunities, including the Grant Tree Trail and the scenic Panoramic Point Trail. The unit’s Kings Canyon Visitor Center offers a bookstore and film showings, while the nearby Grant Grove Stables hosts guided horseback riding expeditions. The Cedar Grove unit is home to prominent rock formations such as the North Dome and Grand Sentinel and offers visitor amenities at its Cedar Grove Visitor Center. A Mineral King Ranger Station within the park’s Mineral King area also houses museum exhibits related to the region’s natural and cultural history.

A variety of overnight accommodations are offered throughout the park, including the Wuksachi, Cedar Grove, and John Muir Lodges and the Grant Grove Cabins. Wilderness lodging is offered at Bearpaw High Sierra Camp and Pear Lake Winter Hut, while 14 campgrounds are available on a first-come first-served basis, including three year-round campground facilities. A number of food options are available throughout the park, including the Grant Grove and Peaks Restaurants, the Lodgepole Deli and Market, and the Cedar Grove Snack Bar. Dining options are also offered at several lodges near the park, and picnic areas are provided throughout the park’s units. Outdoor activities offered throughout the park include day hiking, backpacking, rock climbing, skiing, snowshoeing, and horseback riding, with many outdoor excursions led by park rangers and offered as daily park programming. A Junior Ranger program allows young visitors to receive participation badges in exchange for completion of park activities, and a number of educational opportunities are offered by the parks, including curriculum-incorporated field trips and in-classroom distance learning programs.

25 Best Things to Do in Santa Barbara (California)

25 Best Things to Do in Orange County, California