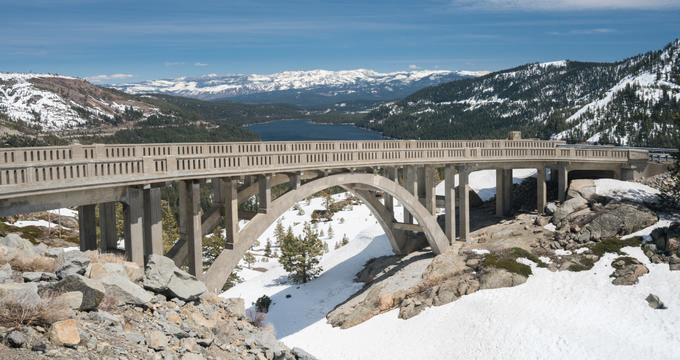 Not far from Donner Lake and the city of Truckee, Donner Pass is a mountain pass through the northern part of the Sierra Nevada range in California. The pass has been used for many different roads and routes over the years, including the California Trail, Lincoln Highway, Victory Highway, and First Transcontinental Railroad. The area has a fascinating history, bearing witness to the tragic Donner Party incident for which it was named, and is now regarded as a thriving recreational area with lots of local ski resorts and lakes to enjoy all around. CDC information for travelers. Hours/availability may have changed.

Getting to California from Nevada meant passing through the treacherous Sierra Nevada mountains, which wasn't easy for 19th century travelers and settlers. In 1844, one scouting party decided to follow the Trucker River through the mountains and discovered what would become known as Donner Pass, identifying it as one of the few relatively simple ways to make it through the mountains.

The mountain pass would get its name after a tragic event in 1846 when the Donner Party, originally known as the Donner-Reed Party, traveled to California from Missouri. Their trip was plagued with misfortune and they ended up stuck among the Sierra Nevada mountains, eventually having to resort to cannibalism to stay alive. Almost half of the 87 members of the original party died en route. In honor of this terrible ordeal, Donner Pass and Donner Lake were named in memory of those who died. In the modern era, despite being the site of such a terrible tragedy, Donner Pass is now a joyful area for people to enjoy recreational activities of all kinds with friends and family members. 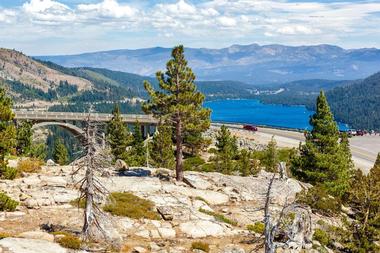 The elevation of a town, city, or other key location is an indicator of how high or low it is when compared to sea level and is a very important geographical statistic, used for architecture, town planning, weather forecasts, and more. The elevation of Donner Pass is very high due to its location among the Sierra Nevada. Donner Pass’ elevation is 7,056 feet (2,151 m). Most major cities and towns around the United States are situated at elevations of 500 feet (152 m) or less, but the nearest city to Donner Pass, Truckee, has a high elevation of 5,817 feet (1,773 m).

The highest peak in the Sierra Nevada is Mount Whitney, which has an elevation of 14,505 feet (4,421 m) and is also the highest mountain in all of California and the rest of the contiguous United States. The lowest point in the state of California is Badwater Basin, which can be found in Death Valley. Badwater Basin has an elevation of 279 feet (85 m) below sea level and is the lowest elevation point in all of North America. Despite being the home of such extremes in terms of elevation, California’s mean elevation is just 2,900 feet (880 m), just a few hundred feet higher than the national average of 2,500 feet (760 m).

You are reading "Donner Pass Elevation" Back to Top

3.Climate and Things to Do in Donner Pass 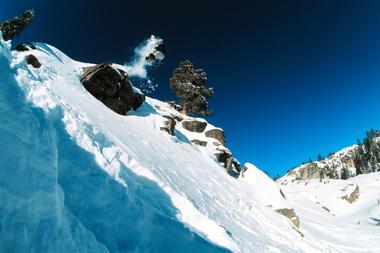 The high elevation of Donner Pass, as well as its location among the Sierra Nevada mountains, contributes to its climate, which is very different from the typically sunny image that many people associate with the state of California and cities like San Francisco or Los Angeles. Donner Pass has over 50 inches of precipitation per year, with more than 400 inches of snow in total. It's one of the snowiest locations in the country and temperatures often fall below freezing point at this mountain pass.

Despite the harsh weather conditions, Donner Pass is a popular tourist spot due to the wide array of activities that can be enjoyed nearby. Various ski resorts are located just short drives from Donner Pass, and other activities like camping, hiking, cross-country skiing, climbing, snowboarding, and more are all popular in this California location. Several stunning alpine lakes are also located around Donner Pass, offering breathtaking views in every direction.

You are reading "Donner Pass Elevation" Back to Top

You are reading "Donner Pass Elevation " Back to Top

25 Best Things to Do in Murphys, California