Wisconsin Things to Do: Treinen Farm 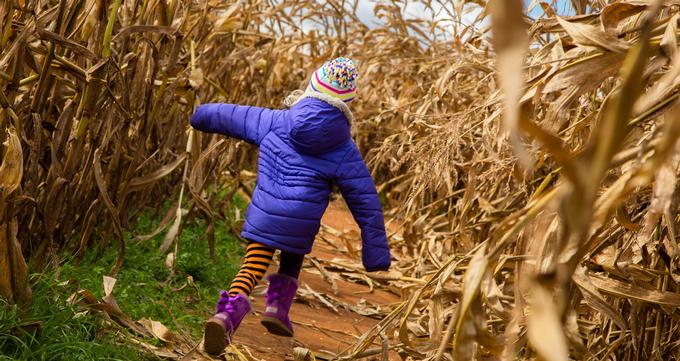 Located in Lodi, Wisconsin, Treinen Farm is a seasonal family farm, offering a corn maze, pumpkin patch, hayrides, and family-friendly events and activities throughout the autumn months. The land that now encompasses Treinen Farm shows evidence of human occupation by Plains Indians indigenous groups dating back as far as 6,000 years ago.

The area was originally homesteaded in 1856 by Solomon Gottschall, who constructed a log home that was expanded into a frame house during the Civil War. A barn was added to the property by Gottschall’s son, Everett. In the early 1920s, the Treinen family purchased the farmstead property and added a brick farmhouse to the facility. The farm remained in the Treinen family throughout the 20th and early 21st centuries and was eventually opened to the public during the autumn months as a public fall festival attraction.

Today, Treinen Farm is owned by the third generation of the Treinen family and is operated as a 200-acre farm and public festival attraction during the autumn months. The farm is overseen by Alan and Angie Treinen and cultivates hay, corn, soybeans, and pumpkins throughout the growing season. As a family-owned farm and attraction, Treinen Farm is dedicated to providing family-friendly entertainment for visitors of all ages and promoting sustainable farming and community practices throughout the Wisconsin region. The farm’s major public attractions are open to the public rain or shine on weekends from Labor Day through the second weekend in November, with additional attractions operating throughout weekends in October.

Treinen Farm is best known for its 15-acre corn maze, the largest of its kind in the state of Wisconsin. The maze, which is custom-designed annually by Angie Treinen, has been named as one of the 10 best fall corn mazes in the United States by USA Today. Each year’s maze is grid-cut by farm employees without the use of GPS aids and features more than six miles of internal path twists and turns. Past maze designs include a Greek mythology-themed maze in 2011, a technology-themed maze in 2012, an Aesop’s fables-themed maze in 2015, and a trilobite-shaped maze in 2017.

Visitors may divide into teams to compete to finish the maze, which features several secret locations within its path that offer additional challenges. Maps are provided for visitors upon embarking on maze exploration, though visitors who turn in unopened maps at the end of the maze receive completion prizes. Maze completion typically takes one to two hours, depending on team navigational abilities. An observation tower is offered for aerial views of the maze’s theme and for strategy for maze completion prior to team exploration. Families and visitors with young children may also explore the maze at their leisure with opened maps. All maze visitors should be advised to wear sturdy shoes, as maze paths may become slippery or muddy during inclement weather conditions, and should carry water and use restroom facilities prior to entering the maze.

In addition to the annual maze, a variety of fall festival activities are offered at Treinen Farm, including a seasonal pumpkin patch featuring more than 15 varieties of pumpkins. Wagon rides are offered throughout the morning and afternoon hours to take visitors to the pumpkin patch, and a pumpkin daycare facility is available for visitors to leave their pumpkins as they enjoy other farm activities. Horse-drawn hayrides are also offered, led by the farm’s Belgian and Percheron draft horses. A children’s playground and activity area features a Molehill Mountain playground, a pumpkin slingshot station, a Jacob’s Ladder rope climbing area, and a gemstone mining station. Traditional farm activities are offered, including petting zoo areas with farm animals and self-guided tours of the farm’s barns and fields. A Wadizzit Traveling Food station offers rib-eye steak sandwiches, burgers, hot dogs, Treinen Farm label corn nuggets, cider donuts, kettle corn, homemade ice cream, and apples from nearby Lapacek’s Orchard. Hot chocolate and apple cider are also available at several stands throughout the farm.

In addition to standard visitor admission, group rates are offered for farm activities for groups of 20 or more, including group admission to the farm’s corn maze. Guided field trip opportunities are offered for elementary school groups, with field trip packages available for time within athe farm’s corn maze, pumpkin patch, and other activities. Private party rentals for school, birthday, and community groups are available, with package options for hayrides, bonfires, catered meals, and live entertainment and DJs. Team-building workshops are also offered for school and corporate groups. Visitors may reserve private bonfires at the facility throughout the autumn months, with each bonfire area seating a maximum of 25 visitors. Annual special events at the farm include the Halloween Zompocalypse event, which features zombie-themed entertainment, laser tag, and a gallery of replica cast brains of a variety of prehistoric and modern animals.

More Things to Do in Wisconsin

Things to Do in Milwaukee, WI: Florentine Opera Center

Things to Do in Madison, Wisconsin: Gail Ambrosius Chocolatier

25 Best Things to Do in Door County, WI