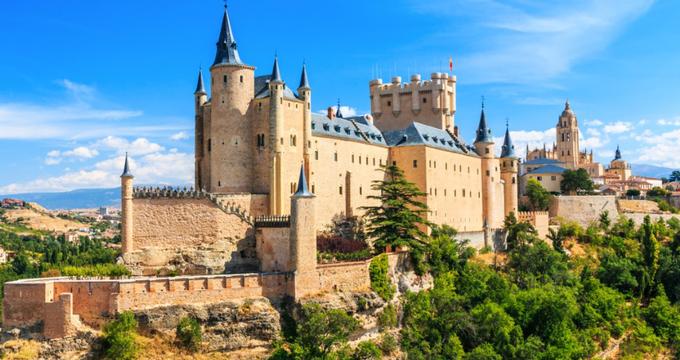 Madrid is Spain's vibrant capital city, known throughout Europe for its majestic boulevards, manicured parks, and cultural attractions such as the Prado Museum, which highlights works by Spanish masters such as Goya and Velázquez. Regional visitors can easily get to a number of northern Spain's most renowned historic sites on day trips from the city, including sites like Alcalá de Henares, renowned as the former home of Don Quixote author Miguel de Cervantes, and Segovia, home to the splendid castle that inspired Walt Disney's Cinderella Castle. The gorgeous Sierra de Guadarrama, located just outside of Madrid's city center, offers spectacular hiking and outdoor recreational experiences. Spain's high-speed AVE Train also offers quick travel to more remote destinations like Córdoba, known for its remarkable Moorish architecture.


1.The Valley of the Fallen 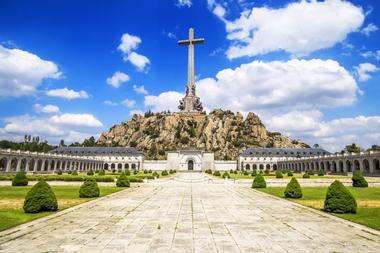 The Valley of the Fallen, known as the Valle de los Caídos in Spanish, is a monument, memorial, and basilica in the San Lorenzo de El Escorial municipality, considered to be a major landmark of 20th-century Spanish architecture at its construction. The monument, which is located within the Sierra de Guadarrama's Cuelgamuros Valley, was designed by architects Diego Méndez and Pedro Muguruza, meant to evoke the grandeur of ancient monuments in the region. It is the most prominent example of Spanish Neo-Herrerian architectural style, which was widely used in post-war Spanish buildings and traces its roots to international classicism. More than 40,000 Nationalist and Republican graves are preserved at the site, with names of the fallen listed on the monument's register. The surrounding valley, which is located just northwest of the city of Madrid, is preserved in its entirety as a national park. Carretera de Guadarrama/El Escorial, 28209 San Lorenzo de El Escorial, Madrid, Spain 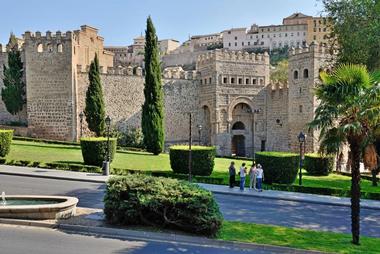 Toledo is a gorgeous ancient city in central Spain, set atop a hilltop above the majestic plains of Castilla-La Mancha. The city, which is best known as the birthplace of internationally-renowned artist El Greco, is noted for its Arab, Jewish, and Christian cultural history, showcasing diverse ethnic monuments within its city walls. It has been designated as a UNESCO World Heritage Site in its entirety since 1987, known as the "City of Three Cultures" during its antiquity period. Visitors can explore landmarks such as the city's Collegiate Church of Santa María la Mayor, Gothic-Mudéjar Church of San Juan Bautista, and 14th-century Parador de Turismo castle and palace at Oropesa. Delicious restaurants highlight unique local cuisine offerings like Toledo-style quail, stewed partridge, La Mancha cheese, and marzipan. The city's annual Corpus Christi festival, celebrated nine weeks after Easter each year, presents a famed colorful procession in the city's center. 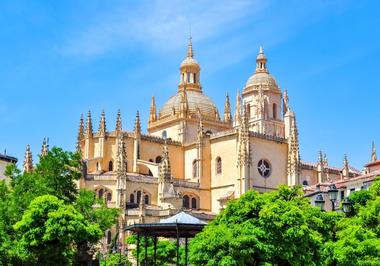 Segovia is one of central Spain's most historic cities, located just northwest of Madrid within the region's Castile and León areas. The famed city, which was designated as a UNESCO World Heritage Site in 1985, is best known as the home of the beautiful Alcázar de Segovia royal palace, which is cited as the inspiration for Walt Disney's Cinderella Castle. Other gorgeous landmarks include the Aqueduct of Segovia, which is still used to deliver drinking water throughout the city, and the Segovia Cathedral, the last Gothic-style cathedral to be constructed in Spain. Visitors can view the city's preserved Medieval-era walls, stroll through the picturesque Alcazar Gardens at the Plaza de la Artillería, or explore the city's famed historic Jewish cemetery, El Pinarillo. 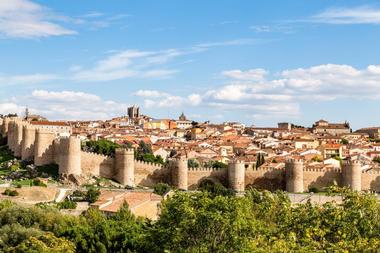 Ávila is the capital city of the Spanish province of the same name, located within the splendid rolling hill landscape just northwest of the city of Madrid. The historic city is acclaimed for its intact Medieval-era city walls, which showcase nine elaborate gates, 2,500 watchtowers, and more than 80 crenelated semicircular towers, including the stunning arched El Alcázar. Visitors can walk along large sections of the city walls for unique perspectives on the city's skyline or view their spectacular lighting during the evening hours. Religious pilgrims flock to the cult of Santa Teresa de Ávila, home to many Romanesque and Gothic-style churches and convents. The city's renowned culinary scene showcases excellent famed local dishes, including suckling pig and lamb and the region's famed Ávila T-bone steaks. 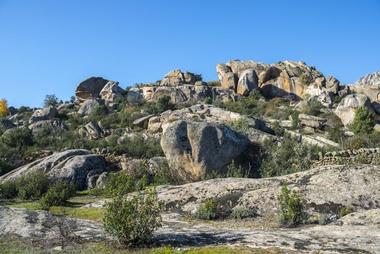 
The Sierra de Guadarrama is a stunning mountain range that forms the major eastern portion of the Sistema Central mountain system running through the Iberian Peninsula, located between the Sierra de Gredos and Sierra de Ayllón ranges near Ávila and Guadalajara. The range, which extends through Madrid into the province of Segovia, stretches for over 50 miles and is one of Madrid's top natural wonders. Immense mountain peaks such as Peñalara stretch nearly 8,000 feet into the sky, located within protected natural reserve environments due to their environmental sensitivity. Visitors can enjoy excellent opportunities for outdoor recreation throughout the year, including chances for hiking and rock climbing at regions like Valle de la Fuenfría and Valle de Valsaín. 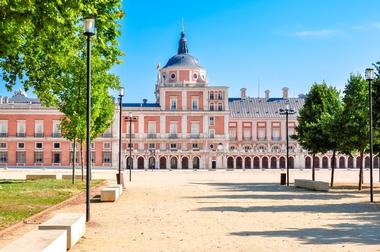 
Aranjuez is a gorgeous town located along the banks of the picturesque River Tagus, just south of the city of Madrid. The city, which was designated as a UNESCO World Heritage Site in its entirety in 2001, is best known for its stunning 16th-century Royal Palace, which showcases French, Rococo, Elizabethan, Chinese, and Moorish design elements. On the palace's grounds, the stunning Jardín de la Isla showcases ornamental plantings, while the Prince's Garden is home to the Neoclassical-style Casa del Labrador and and a Chiniese-style pavilion. Other historic attractions include the Mariblanca Church of San Antonio, the Plaza del Toros, and the Baroque-style Old Quarter of Aranjuez, which has been declared as an Historic Artistic Monument in its entirety for its splendid mansions, convents, and courtyards. 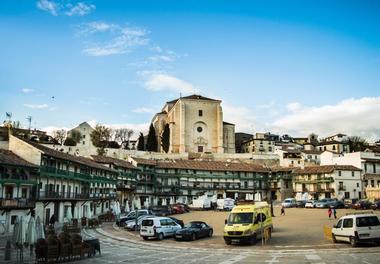 Chinchón is a picturesque town located southeast of the city of Madrid, known throughout Europe of its gorgeous Medieval-era Plaza Mayor, which is encircled by residences with lovely wooden balconies and has been the filming site for major motion pictures starring actors like John Wayne and Rita Hayworth. Visitors can dine at a wide variety of delicious local restaurants on the plaza, serving up delicacies like suckling pig, wood-fired lamb with chorizo, and traditional potaje de vigilia soup. The city's unique Torre del Reloj is known as a "tower without a church and a church without a tower," preserved as the only remains of the 14th-century Nuestra Señora de Gracia Church. The Museo Etnológico La Posada showcases exhibits of traditional agricultural equipment, while the Castille de los Condes preserves the ruins of a 15th-century castle. Each February, the square hosts a lavish Medieval Market event, showcasing parades, live performances, and arts and crafts vendors. 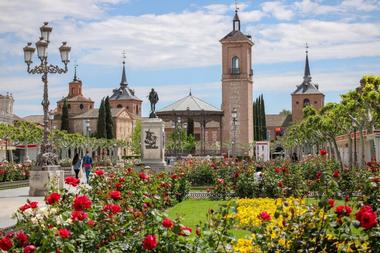 Alcalá de Henares is a lovely city in central Spain, located northeast of the city of Madrid and best known for its 16th-century University of Alcalá. The city, which is located along the Path of the Spanish Language route, has been designated as a UNESCO World Heritage Site in its entirety since 1998. Visitors can explore the lovely Cervantes Birthplace Museum, which preserves the former home of Miguel de Cervantes, the author of the famed novel Don Quixote. The stunning Paraninfo, which showcases intricately-designed Mudejar ceilings, is the site of the presentation of Spain's annual Cervantes literary prize, while the Magisterial Cathedral is erected on the burial site of the Santos Niños Justo and Pastor. Signature delicacies sold at confectioners and cafes throughout the city include caramelized almonds, rosquilla doughnuts, and tarta costrada pastries. 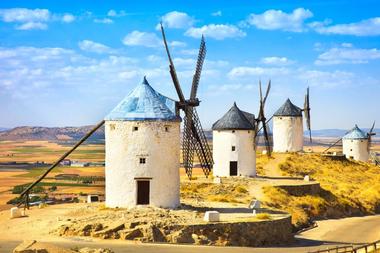 Consuegra is a beautiful municipality within the province of Castile-La Mancha, located approximately an hour from the city of Toledo within the La Mancha region. The lovely region is noted as one of Spain's top wine growing regions, home to spacious vineyards that source grapes for many area wineries. Stunning Spanish-style windmills recall the scenery of Miguel de Cervantes Don Quixote, many of which were constructed in the 12th century and are still used to grind grain and wheat. The preserved Castle of Consuegra fortress, originally constructed by Emperor Trajan, once served as a stronghold when the region was the priory of the Knights of San Juan. Visitors can also explore the region's lovely town hall and major square, which showcases spectacular Renaissance-style architecture. Each year, the region hosts annual festivals such as the Rose of Saffron, which highlights a culinary competition. 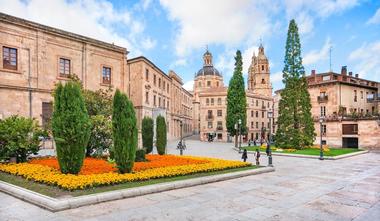 Salamanca is one of Spain's most important university cities, serving as the capital of the province of the same name, which is located within Spain's Castile and León region. The city, which dates back to the country's Celtic era, was declared as a UNESCO World Heritage Site in its entirety in 1988. Ornate sandstone architecture throughout the city showcases Plateresque and Churrigueresque styles, Romanesque churches, and beautiful Baroque plazas. The city's famed nightlife is kept alive by its student population, showcasing an eclectic mix of clubs, bars, and chupitería shot bars. Each year, the city hosts a number of internationally-renowned festivals, including the Semana Santa Holy Week and the Nochevieja Universitaria University New Year celebration, held two weeks before New Year's Eve. 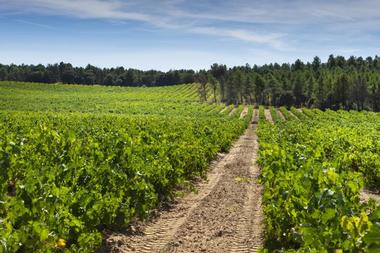 Ribera del Duero is one of Spain's top wine growing regions, located within the region of Castile and León along the course of the stunning Duero River. The wine region dates back at least two millennia, though its modern viticulture arrived during the 12th century with the arrival of Benedictine monks from France's Burgundy region. Today, it is home to more than 300 wineries, which mostly focus on red wine varietals like Tempranillo and Tinto Fino. Iconic wineries include the 150-year-old Vega Sicilia, the 13th-century Bodegas Finca Villacreces, and Bodegas Portia, designed by renowned British architect Sir Norman Foster. Many wineries offer tastings and tour experiences, including tapas pairings and wine flights. Visitors can also enjoy hot air balloon rides over the region's Golden Mile district or visit archaeological sites such as the Zarceras, which is home to caves that were used to store wine in ancient times. 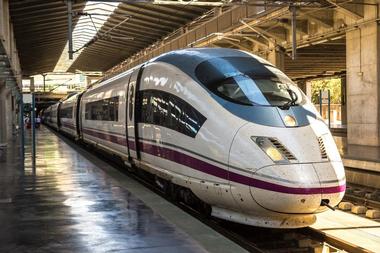 Córdoba is a lovely city in Spain's southern Andalusia region, known as a major Roman and Islamic center during antiquity. Though the city is located more than four hours from Madrid via car, it can be reached in less than two hours via the high-speed AVE Train, which links Madrid to areas such as Sevilla and Malaga. Visitors can view iconic landmarks such as the La Mezquita mosque, which dates back to the 8th century A.D. and showcases spectacular Byzantine mosaics. The mosque, which was declared a UNESCO World Heritage Site in 1984, features Renaissance-style additions dating back to its conversion into a Catholic church in Medieval times. Moorish architecture abounds throughout the city center, including wrought-iron balconies, golden stone buildings, and verdant patios.

25 Best Weekend Getaways Around the World