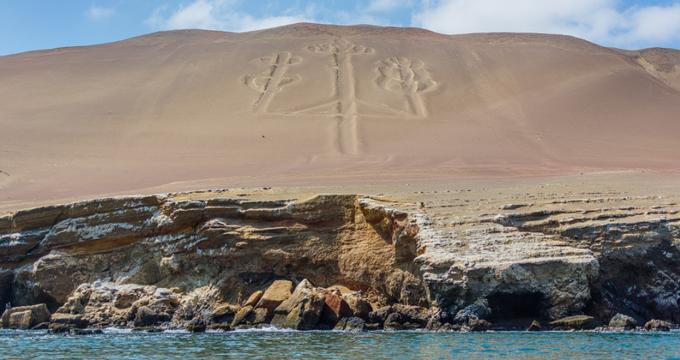 Lima is Peru's bustling capital city, located along the country's lovely Pacific Ocean coastline. The city is known throughout the world for its colonial-era architecture and renowned cultural attractions, including the Museo Larco, which showcases pre-Columbian art, and the Museo de la Nación, which tracks the history of the region's indigneous civilizations. Though the city offers much to do in itself, visitors can also day trip to many of Peru's most famed destinations, including the natural paradise of the Ballestas Islands, commonly referred to as the "Poor Man's Galapagos" for their diverse populations of seabirds and native marine life. Ancient indigenous sites abound, ranging from the unique animal formations of the Nazca Lines to the preserved archaeological sites at Caral, the Americas' oldest city. CDC information for travelers. Hours/availability may have changed. 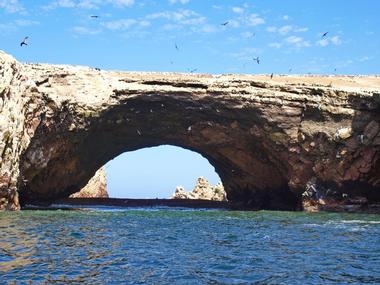 The Ballestas Islands are one of Peru's hidden gems, located just a few kilometers off the country's western coastline within easy day trip distance from Lima. The rocky islands are located just outside the boundaries of the Paracas National Reserve, known as an important habitat for a wide variety of native animal and bird species, including sea lions, seals, and Humboldt penguins. Dolphins populate the region's waters throughout the year, along with a number of rare turtle species. Bird species spotted throughout the islands include Peruvian pelicans, red-legged cormorants, Inca terns, and Peruvian boobies. Throughout the town of Paracas, more than 100 archaeological sites showcase ancient ruins, while local restaurants are noted for their excellent ceviche and seafood offerings. 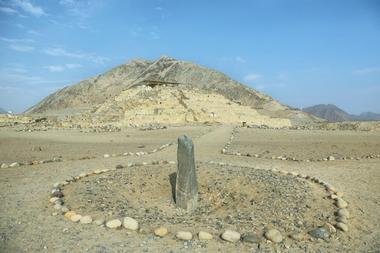 Caral is the oldest city in the Americas, dating back more than five millennia to the Late Archaic Period. The archaeological site, which was designated as a UNESCO World Heritage Site in its entirety in 2009, spans 626 hectares and is connected to the ancient Norte Chico civilization, located along a dry desert terrace overlooking the beautiful Supe River valley. It is exceptionally well-preserved given its age, showcasing complex architectural elements, including monumental stone and earthen platforms and sunken circular courts. Unique archaeological artifacts have been found at the site, including a quipu knot system used to record information in antiquity. Visitors can walk around the site and view its stunning stone pyramids, spacious amphitheaters, and unique ceremonial rooms and altars. 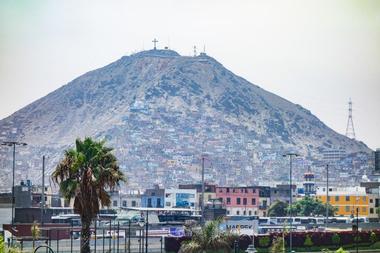 Cerro San Cristobal is a scenic hilltop area overlooking Lima Centro from the northeast, offering stunning views of Lima's city center and the nearby Pacific Ocean coastline. From atop the area's lookout, visitors can view major landmarks on Lima's skyline from unparalleled angles, including the Plaza de Armas, the Plaza de Acho, the National Stadium, and the Presbitero Maestro and El Angel cemeteries. A stunning gigantic cross, constructed in 1928, dots the hilltop's landscape and is known as one of the city's most recognizable landmarks. Each night, it is illuminated, making for amazing nighttime photography opportunities. On the first Sunday in May, religious pilgrims travel to the site for the annual Semana Santa Holy Week celebration.

You are reading "12 Best Weekend Getaways and Day Trips from Lima, Peru" Back to Top 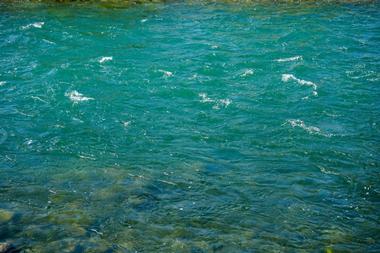 Chosica is Lima's second-largest district, located along the beautiful valley of the River Rimac. The district has been known as one of Lima's most popular resort areas since the construction of the Trans-Andean railroad, attracting wealthy travelers since the mid-19th century. Today, many of the region's historic mansions have been converted into hotels and visitor attractions. Visitors can explore the region's unique Marcahuasi stone forest, which showcases unusual carvings of unknown ancient origin resembling animal and human forms. Stunning countryside areas offer some of the region's best hiking experiences, nestled into the foothills of the majestic Andes. The lively Plaza de Armas offers food vendors selling street food like churros and picarones, along with a variety of amusement rides and games.


The Guañape Islands are a collection of four islands located off the coastline of northern Peru, known for their populations of native seabirds, including the Guanay cormorant. The islands have been protected as a natural reserve by Peru's Reserva Nacional Sistema de Islas, Islotes y Puntas Guaneras system since 2009. Islands include Isla Guañape Norte, Isla Guañape Sur, Islotes Cantores and Islotes Los Leones, all of which can be accessed via boat tours by a number of area tourism operators. Guano harvesting is practiced throughout the islands, turning seabird excrement into organic fertilizer. Sea lions are showcased in their natural habitat at the port of Callao, while shipwreck and pirate legends are prominent in the history of nearby San Lorenzo Island.

You are reading "12 Best Weekend Getaways and Day Trips from Lima, Peru" Back to Top 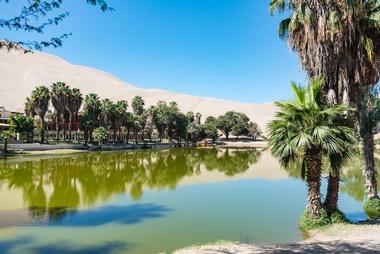 
Huacachina is commonly referred to as the "Oasis of America," known as one of southwestern Peru's most popular resort regions. The desert oasis and village, which is located just west of the city of Ica, is home to the beautiful Huacachina Lagoon, which is encircled by palm trees and believed by many to have therapeutic, rejuvenating properties. Tens of thousands of tourists visit the region throughout the year for excellent recreational opportunities, including chances for sand dune sandboarding and arenero dune buggy riding. Lively clubs, restaurants, and bars line the lagoon's shores, making for vibrant nightlife experiences. Nearby, Ica is home to many wine and Pisco vineyards, which showcase tastings and tours throughout the week. 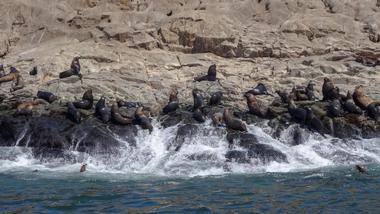 The Palomino Islands are a lovely collection of islands located just off the coastline of the city of Callao, known for their impressive populations of native sea lions and seabirds. The biologically rich islands are teeming with native bird species, including Peruvian pelicans, patillos, guanayes, zarcillos, and red-legged cormorants. Visitors can ride out to the islands via boat and enjoy excellent opportunities for marine life watching, including chances to see dolphins and penguins at select times throughout the year. Sea lion swimming tours are offered by several companies, giving participants a chance to swim amongst native marine life. On the islands' highest point, an historic lighthouse still stands, which once guided ships into the beaches of Callao's port. 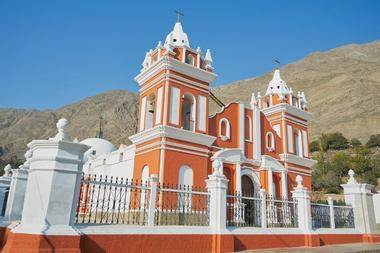 Lunahuaná is a charming Peruvian town located south of the city of Lima, set within a picturesque mountain valley along the banks of the majestic Cañete River. The river serves as a popular destination for white water rafting throughout the year, offering high thrill rafting excursions led by experienced tour guides. Hiking, mountain biking, and paragliding are also popular activities throughout the year, along with angling for a variety of fish species on the river. The colonial-era Lunahuaná Cathedral is located within the Plaza de Armas, while the Incahuasi ruins west of the city's center showcase 15th-century indigenous structures. Surrounding areas such as Catapalla are known for their wine and Pisco production, located along an officially-designated winery trail.

You are reading "12 Best Weekend Getaways and Day Trips from Lima, Peru this Weekend with Friends" Back to Top or More places to see near me 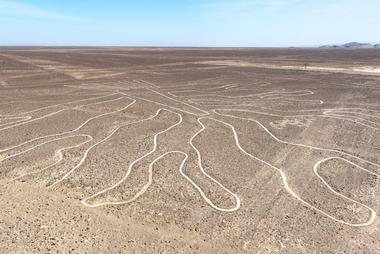 The Nazca Lines are a unique collection of pre-Columbian-era geoglyphs that are etched into desert sands over a 1,000-square-kilometer area in southern Peru. More than 10,000 lines are located within the region, showcasing more than 300 etchings and figures, including plants and animals such as jaguars, llamas, hummingbirds, monkeys, and spiders. Some of the largest shapes within the cluster measure up to 30 meters wide, easily visible from nearby hilltops or aerial tours. Due to the dry, windless climate of the surrounding plateau region, the shapes have been preserved in stunning natural condition. Though the shapes were discovered as early as the 16th century, their overall design was not realized until their exploration by Peruvian archaeologist Toribio Mejía Zesspe in 1927. Since 1994, the lines have been designated as a UNESCO World Heritage Site. 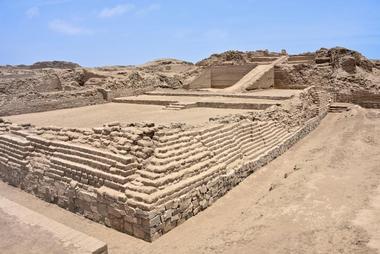 Pachacamac is an important archaeological site located approximately half an hour southeast of the city of Lima within the beautiful Valley of the Lurín River. The site is believed to have been first settled around 200 A.D. and inhabited for more than 1,300 years prior to the Spanish invasion of South America. It is named in honor of the indigenous creator god Pacha Kamaq, known as the "Earth Maker." Though many of the site's traditional structures were destroyed by Spanish conquerors in the 15th century, much of its former glory has been excavated and resurrected since the 1930s. Today, visitors can view the remains of the former religious center, including several temples, ritual sites, and mausolea. 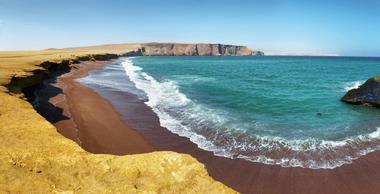 Paracas National Reserve is one of two regions that preserve Peru's coastal marine ecosystems, located approximately two and a half hours outside of Lima via the Panamericana Sur Highway. The reserve, which is located near Peru's Salas and Paracas districts, stretches over more than 827,000 acres and protects sensitive desert and marine habitats near the region of Ica. The lovely Ballestas Islands, known as the "Poor Man's Galapagos," are home to populations of sea lions, seals, turtles, Humboldt penguins, and native seabirds and can be explored via guided boat tour. Stunning natural beaches abound on the region's craggy coastline, showcasing clear emerald waters and gorgeous panoramic vistas. Visitors can also view preserved archaeological sites connected to the pre-Incan Paracas culture. 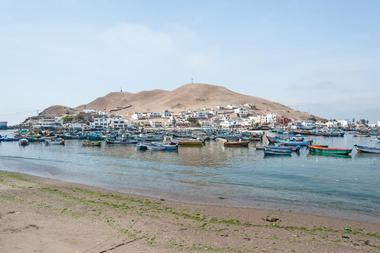 Pucusana is a beautiful district in southern Lima Province, known throughout the country as one of Peru's top beach destinations. The region is bordered by the Pacific Ocean on two sides, attracting holidaygoers throughout the summer months to its public swimming and sunbathing beaches. Jet skiing rentals are popular during the year, with rentals starting at affordable rates. Boat tours offer opportunities to view native marine life, including dolphins and sea lions. The region is also known as a top fishing area, offering guided fishing charters by regional fishermen. Area restaurants are known for their excellent ceviche options, crafted with fresh-caught fish prepared sea-to-table.

You are reading "12 Best Weekend Getaways and Day Trips from Lima, Peru " Back to Top