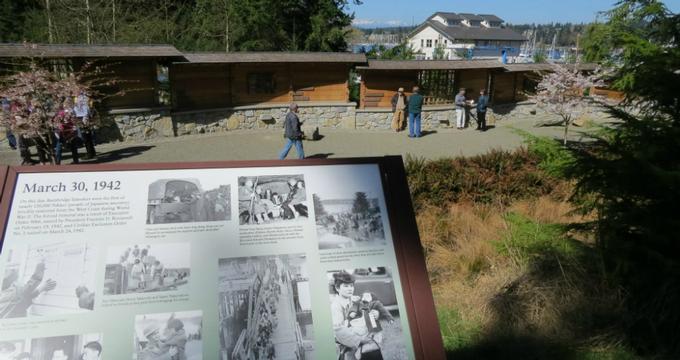 By the 1940s, a large Japanese-American population had become part of the island’s community. Following the Pearl Harbor attack in 1941, however, the signing of Executive Order 9066 authorized the creation of exclusion areas to transport Japanese-Americans to concentration camps for the duration of the United States’ participation in World War II. Bainbridge Island was designated as the country’s first exclusion area, and in March of 1942, the island’s Japanese-American residents were gathered at the Eagledale Ferry Dock for transport to an internment camp in Manzanar, California. A photograph taken of island resident Fumiko Hayashida and her infant daughter while boarding the transit ferry, published in the Seattle Post-Intelligencer, became a national symbol of the campaign against and historical remembrance of the internment period.

The island became a voice of resistance during the internment period, with Bainbridge Review editors Walt and Mill Woodward becoming one of the few West Coast newspaper voices to take a public stand against internment. In 1943, Bainbridge Island residents were relocated to the Minidoka Relocation Center, one of 10 major concentration camp facilities along the West Coast. Though concentration camp residents were allowed to return to their homes and lives following the end of the war, remembrance of the period became a cultural touchstone through the phrase Nidoto Nai Yoni, which roughly translates to “let it not happen again.”

As a result of Executive Order 9066’s violation of Fourth, Fifth, and Sixth Amendment constitutional rights, the Civil Liberties Act of 1988 presented apologies and redresses for the actions committed against Japanese-Americans during WWII. Plans for memorials sprung up around the country soon thereafter, including the 1998 formation of the Bainbridge Island World War II Nikkei Internment and Exclusion Memorial Committee for the creation of a memorial at the sites of the former Eagledale Ferry Dock. The organization proposed the construction of a $9 million memorial and interpretive center, which was approved in 2007, with the proposed site area being granted National Monument status. The memorial site, designed by architect Johnpaul Jones, broke ground in March of 2009 and was opened to the public two years later in July of 2011.

Today, the Bainbridge Island Japanese American Exclusion Memorial is managed by the Bainbridge Island Japanese American Community, serving as a unit of the greater Minidoka National Historic Site, which is located in Idaho. The site commemorates the 276 Japanese-Americans who were exiled from the island as part of Executive Order 9066 and serves as a celebration of the island community’s diversity and support of Japanese-American citizens during the war period and today. The memorial is located along Eagle Harbor’s south shore, overlooking the town of Winslow.

A 272-foot wall made of old-growth red cedar, basalt, and granite winds along the harbor’s shoreline, presenting the names of the 276 Japanese-American residents of the island who were imprisoned in concentration camps during the war. Structured as a “story wall,” the memorial winds down to a pier constructed on the site of the former Eagledale Ferry Dock, spanning 150 feet in honor of the 150 residents who returned to Bainbridge Island after internment. The memorial is engraved with the Nidoto Nai Yoni inscription, honoring the island’s commitment to preserving its Japanese-American history and cultural diversity.

The site is part of the island’s 50-acre Pritchard Park, which serves as a public recreational area and natural wildlife refuge for more than 42 species of birds and 40 plant species. A National Parks ranger is on site at the memorial to answer questions and provide additional information. Wayside markers throughout the memorial also elaborate on the history of Japanese-American internment and post-war reparations.

Free guided tours of the facility are offered by appointment for small groups and organizations with a minimum of three weeks’ advance notice. All interested tour groups should contact the Bainbridge Island Historical Society with information about group size and desired date and time of booking. Several annual commemoration events are held at the memorial, including the national annual Day of Remembrance and an Anniversary Commemoration in March presented by the Bainbridge Island Japanese American Community. An annual community service and volunteer day is also held at the memorial on the anniversary of the signing of Executive Order 9066.