Things to Do in Olympia: Washington State Capitol 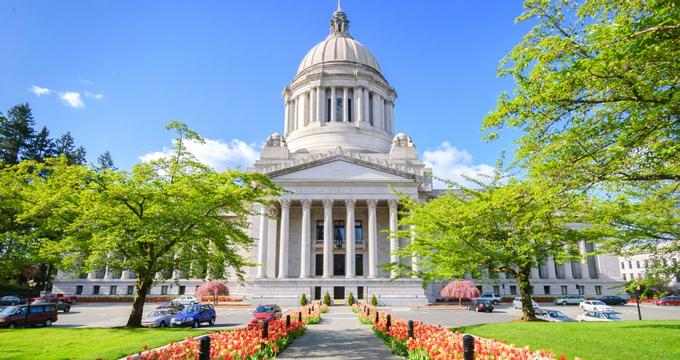 The Washington State Capitol, or also known as the Legislative Building, houses the state government of Washington in Olympia, WA. The building includes the chambers of the Washington State Legislature, as well as the offices of the treasurer, the secretary of state, the lieutenant governor, and the governor. The Capitol building is also part of a larger campus that contains several other buildings, including the Washinton Governor's Mansion, executive agencies, and the Washington Supreme Court.

In 1974, the campus of the Capitol was added to the National Register of Historic Districts. The campus contributes to or contains some of the best views in the state of Washington, including the Capitol Dome, the Olympic Mountains, Mt. Rainier, and Puget Sound. The state's Capitol Campus design is an excellent example of the Progressive Era's City Beautiful style of the early twentieth century. In addition the many buildings located throughout the campus; such as the Temple of Justice, Legislative Building, and various office buildings; the space is also home to several veterans' memorials.

The state seal of Washington, featured in the buildings of the Capitol Campus on door handles, railings, tapestries, and the state flag among other places, was designed by Charles Talcot, a jeweler of Olympia. This seal was created by placing a two-cent stamp featuring George Washington in the center of two circles. The Washington State Capitol even contains a bronze version of the state seal within the floor of its rotunda. The seal has been worn down over the years from foot traffic, so the area is now roped-off to keep the seal from being damaged further.

As the home of the Washington State Legislature, as well as the offices of many elected officials, the Legislative Building is the Capitol Campus' dominant feature. The building's dome, at 287 feet in height, is the country's tallest self-supporting masonry dome. It is the world's fifth tallest, surpassed by only Rome's St. Peter's Basilica, London's St. Paul's Cathedral, Mumbai's Global Vipassana Pagoda, and Florence's Santa Maria Del Fiore.

There are numerous features of the Washington State Capitol that commemorate Washington becoming part of the Union as its 42nd state, such as forty-two steps leading to the north entrance of the building and one of four flags containing forty-two stars owned by the state that is displayed in the building's State Reception Room. Flags featuring forty-two stars were never the official flag due to Idaho's admission to the Union shortly after the admission of Washington.

The Washington State Capitol is made up of four floors centered by the structure's dome. Within the building's raised base, the first floor is home to offices of legislative and other officials. Doric columns surround the next two floors and are capped with a cornice, encircling the structure. Above the rotunda is a chandelier weighing ten thousand pounds, suspended fifty feet from the floor. The building are houses a large bust of George Washington made out of brass. The nose of the bust is now shiny due to guests rubbing it over the years for good luck.

More Things to Do in Olympia

Things to Do in Seattle, WA: Woodland Park Zoo