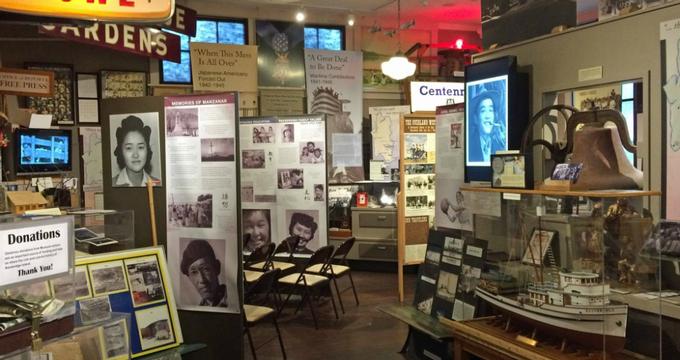 In 1949, the Society was merged with the local Kitsap County Historical Society and was incorporated as the Bainbridge Island branch of the organization. Following the merger, Elnora Parfitt was elected as the Society’s first official president. In the 1970s, the Bainbridge Island School Board donated the historic Island Center schoolhouse, which had been constructed in 1908 and operated until 1923 as a one-room schoolhouse, for the Society’s use as a museum facility. The schoolhouse building was moved to the island’s Strawberry Hill Park, which formerly served as a site for a Cold War-era Army missile base. Difficulties in public access to the Strawberry Hill Park site prompted a multi-phase move of the museum’s facilities to the island’s downtown area, which began in 2003 with the approval of a 90-year lease of a lot on Ericksen Avenue. The museum’s collections were temporarily stored while the museum’s buildings, including the historic schoolhouse facility, were relocated to the downtown site. The museum’s new downtown location officially opened to the public in August of 2004.

Today, the Bainbridge Island Historical Museum serves the Bainbridge Island community by preserving its social and cultural history through a variety of museum exhibits and public programming events. The museum’s 1908 schoolhouse facility is preserved as a historic landmark, serving as the primary facility for exhibit showcase, while an annex building contains a gallery for rotating temporary exhibits, along with office space and a research library facility. A core staff of five employees oversees operations along with a team of more than 100 volunteers and a local Society membership of more than 800 islanders. As a result of its new location, the museum has become part of the island’s downtown cultural corridor, located near the Bainbridge Performing Arts Playhouse and Winslow’s City Hall building.

The museum’s collections, which are stored within the annex building’s climate-controlled basement when not on display as part of exhibits, showcase the social and cultural history of the island from the mid-19th century through the present through a variety of artifacts, documents, and multimedia objects. More than 9,000 photographs are preserved as part of a historic photography collection dating back to 1854. Other items include collections of historical maps and nautical charts, logs from early area settlers, civic data and documents, industrial artifacts, ephemera memorabilia, and archaeological and geological materials related to the island’s natural and indigenous history.

All museum exhibits are geared toward families and children, with a variety of hands-on interactive and accessibility features, including audio recordings, multimedia presentations, and touch drawers. The schoolhouse building’s main An Island Story exhibit spans the island’s history from its indigenous days through the present day, focusing on ethnographic timeline elements. Focused historical exhibits include World War II From An Island Perspective, which examines the island’s participation in World War II, including the 492 islanders who served in troops such as the all-Japanese 442nd Regimental Combat Team, the use of Fort Ward and Battle Point as radio communications posts, and the use of Winslow Shipyard for the construction of steel-hulled minesweepers. The Ansel Adams: A Portrait of Manzanar exhibit provides a visual retrospective of the experiences of the 227 island citizens transported to Manzanar, California in 1942, the first Japanese-Americans to be relocated in internment camps during the war. Other exhibits include the Overland Westerners exhibit, which documents the three-year journey of four island horse riders across a 20,352-mile of the continental United States, and the Port Blakely: Portrait of a Mill Town historical photograph and multimedia retrospective.

The museum’s research library is open to the general public, with special hours for students, researchers, and visitors with accessibility needs available by appointment. Collections include a large variety of books, oral histories, biographical files, and multimedia pieces related to the island’s history. A variety of public educational programming is offered at the facility, including curriculum-incorporated tours of the museum for elementary and secondary students. Outreach educational programming includes in-classroom storyteller visits and trips to area historical sites for student groups. An annual Friendship Camp is presented for area youth in conjunction with the local Suquamish Tribe, and a variety of public special events are hosted at the facility annually, including a Historic Tree Walk, Cruise Around the Island, and a number of neighborhood celebrations and community walk events. Free admission to the museum is offered on the first Thursday of every month, and a StoryShare program solicits local community narratives through an outreach initiative.