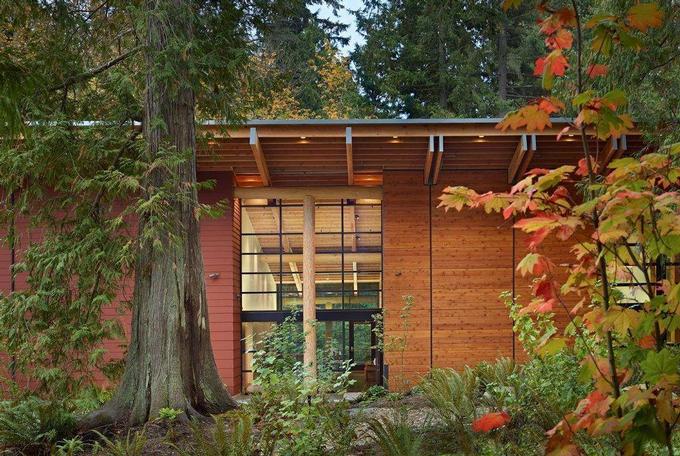 The traditional Southern Lushootseed name for the region roughly translates to “place of clear salt water.” Prior to the arrival of Europeans in the Pacific Northwest, the Suquamish tribe sustained primarily on salmon and clam harvesting practices and lived in a network of affiliated autonomous small villages connected by intermarriage, political and trade agreements, and broader culture and language elements.

Following the 1853 establishment of the Washington Treaty and the 1855 signing of the Point Elliott Treaty, the Suquamish were relocated to the Port Madison Indian Reservation, located near its traditional winter village on Agate Pass. The modern Suquamish Tribe partners today with the State of Washington on a number of economic and cultural endeavors, including co-management of the state’s salmon fishery. In 1983, the Suquamish Museum and Cultural Center was opened by the tribe as a means of preserving their history and culture for future generations in a public museum setting. A major capital campaign was embarked on in 2009 for the construction of a new long-term facility for the museum, aided by the efforts of Senator Patty Murray and Washington Secretary of State Ralph Munro. In 2012, the new facility was opened to the public, tripling the former museum’s exhibit and activity space.

Today, the Suquamish Museum is owned the Suquamish Tribe and is governed by a five-member board of directors overseeing its operations. The museum’s current 9,000-square-foot facility was designed by Seattle architectural firm Mithun at a cost of $6 million and has received LEED Gold certification for its environmental sustainability efforts. It is located within a botanical garden setting in the Suquamish Village region of the Port Madison Indian Reservation and is open to the public daily throughout the summer months, with five-day operations during the fall, winter, and spring.

Two galleries are featured at the museum, one housing the museum’s permanent collections and the other hosting rotating temporary exhibits related to aspects of Suquamish history and culture. The museum’s permanent Ancient Shores: Changing Tides exhibit gallery showcases a wide variety of cultural artifacts on loan from Suquamish tribe members and families, many of which have never been featured on display elsewhere prior to their acquisition by the museum. The exhibit, designed in collaboration with Seattle’s Storyline Studios, uses symbolic design elements to chronicle the story of the Suquamish Tribe’s past, present, and future and foster deeper understanding of culture than is usually created by modern historical narratives. The tribe’s native Lushootseed language is heavily integrated into the exhibit, emphasizing critical analysis of communication between cultures. Highlights of the exhibit include a 300-year-old carved canoe and a cedar-designed timeline display that spans tribal history from the end of the last Ice Age through the present day. An award-winning documentary produced in collaboration with Seattle’s Sadis Filmworks, Come Forth Laughing, is also shown periodically in a 50-seat auditorium within the exhibit.

Past exhibits within the museum’s rotating exhibit gallery include Trade of the Northwest Coast, which examines the relationship and commerce between the Suquamish and early European fur traders in the first part of the 19th century. The works of artist Danielle Morsette were the focus of Woven: Contemporary Salish Wool Weavings, which highlighted traditional tribal clothing design techniques.100 Years: Photographs from the Suquamish Tribal Archives showcased a retrospective of historical images of the tribe in order to challenge contemporary Western romanticizations of indigenous life, while Salish Bounty: Traditional Native American Foods of Puget Sound worked with Native Coastal Salish advisors to explore the tribe’s diverse culinary traditions and diets.

In addition to exhibit gallery spaces, the museum also stores artifact collections in a climate-controlled storage vault, which is accessible to tribal members and accredited researchers on an appointment basis. The Leota Anthony Museum Store offers a wide variety of merchandise celebrating elements of Coast Salish indigenous culture. All products for sale are produced by Native-owned companies and artisans or allied ethical corporations working in conjunction with the Suquamish Tribe.

Guided tours of the museum are offered for small groups and organizations, including curriculum-incorporated field trip opportunities for elementary and secondary school groups. Tours may include showings of documentaries related to Suquamish and Salish cultures, tours of the nearby Old Man House village and Baba’kwob site, and in-depth exploration of current temporary exhibits. Special workshops may also be designed to focus on topics related to group needs. Researchers wishing to access the museum’s archives may also make copies of photographs, documents, and oral history transcripts by special arrangement with museum staff.