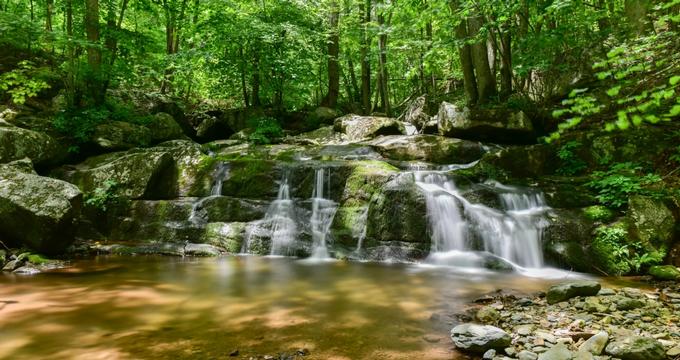 Shenandoah National Park consists of 200,000 protected acres of land less than 100 miles from Washington, D.C. The park may be explored by car or by foot, and offers stunning panoramas, waterfalls, quiet woods and wildlife viewing. 500 miles of hiking trails include 101 miles of the Appalachian Trail, an eastern footpath that flows north to south from Maine to Georgia. Old Rag Mountain is one of the most popular, and most dangerous, hikes in the park. Certain attractions may be temporarily closed or require advance reservations. Hours/availability may have changed. 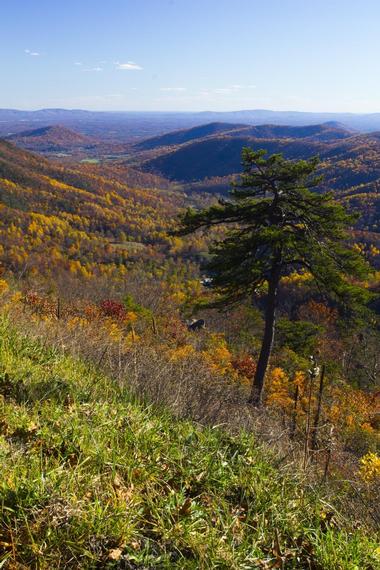 The 8-mile loop contains 3 miles of upward climbing and finishes with a scramble over tall boulders that require long arms and upper body strength to navigate. Rock-climbing on Old Rag and other areas is a popular activity in the park and there are opportunities for all levels of climbing. In addition to several campgrounds throughout the park, backcountry camping permits are available. Guests have lodging options at the Big Meadows Lodge, Skyland, the Lewis Mountain Cabins and the Potomac Appalachian Trail Club primitive cabins. The park has two visitor centers. The Dicky Ridge Visitor Center is located on mile 4.6 of Skyline Drive, while the Harry Byrd Sr. Visitor Center is located on mile 51. Both offer exhibits and an orientation movie in addition to a bookstore, restrooms and information desk. Exhibits at the Byrd Visitor Center tell the story of the history of the park, work done by the Civilian Conservation Corps, and the cultural history of the park’s desegregation in the 1940’s. Rapidan Camp is the former summer home of President Herbert Hoover. The president’s cabin, along with the Prime Minister’s cabin have both been historically restored and are open to the public as a museum. The Massanutten Lodge houses an exhibit called “The Women of Skyland.” The historically refurbished home was originally owned by Addie Nairn Pollock, the owner of Skyland. The exhibit focuses on the women who frequently visited the lodge during the 1920’s. 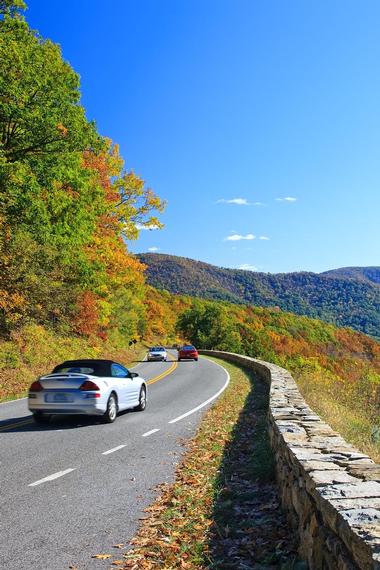 Although legislation to create a National Park in the southern Appalachian mountains was introduced in 1901, and supported by President Theodore Roosevelt, it failed to pass. In 1925, congress finally approved the creation of the Shenandoah National Park, yet they stipulated that no federal funds would be used to acquire the land. Instead, Virginia was to use private donations, state funds, and could evoke eminent domain. In a controversial move, the state began to acquire the land for the park through eminent domain, promising many of the tenant farmers and squatters who lived off the land that they could remain on their property after the park was established. This promise fell through, however, and many residents were forced to move without receiving pay for the property their livelihoods depended on. Adding to the sense of unfairness, many higher priced lands were spared when the park was reduced in size, while the poorest residents of the area were forcibly evicted. The evictions continued through 1935 when the park was officially established. Despite the negative publicity, the park did benefit some Virginians. Many worked on the construction of the park roads and with the Civilian Conservation Corps, removing dead trees and constructing trails. Tourism significantly increased after the park’s establishment, creating jobs and benefitting local businesses. An exhibit at the Byrd Visitor Center tells the story of the park’s desegregation. When facilities were originally planned, Jim Crow Virginia was racially segregated. Many of the privately operated concessions within the park were for whites only. A separate, smaller and inferior facility at Lewis Mountain was the only lodging and picnic area in which African Americans were allowed. During World War II, concessions closed as park attendance fell, and by the time the park reopened in 1945, the Parks Service mandated that all facilities be desegregated. The mandate was fully completed in 1950.

You are reading "Weekend Getaways from DC: Shenandoah National Park" Back to Top 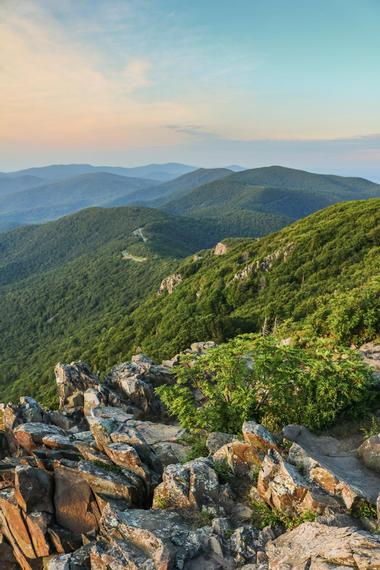 Ranger-led programs are offered in the spring, summer and fall. Summer activities include ranger-led hikes at Fox Hollow Trail, Mount Marshall and Stony Man. An Ancient Volcano Hike begins at the Timber Hollow Overlook. The strenuous 2-mile uphill climb teaches visitors about the history of the volcanoes that shaped the region. Evening ranger talks take place at Skyland and the Dicky Ridge Visitor Center. A Junior Ranger program takes place each Saturday at the Dicky Ridge Visitor Center. Fall programs repeat many of the summer offerings and in addition include Birds of Prey talks at the Big Meadows Amphitheater, Appalachian Trail hikes from Milam Gap, and guided tours of the Rapidan Camp and Massanutten Lodge homes.

You are reading "Weekend Getaways from DC: Shenandoah National Park" Back to Top

You are reading "Weekend Getaways from DC: Shenandoah National Park " Back to Top

5 Best Things to Do in Gordonsville, Virginia

20 Best Virginia Wineries to Try on Your Weekend Getaway